New York manufacturing has made major headway in January, according to a new report released today by the New York Federal Reserve.

Comprised of surveys from around 100 New York executives, The Empire State Manufacturing Survey attempts to determine whether certain components of manufacturing have experienced growth (positive number), or contraction (negative number). Investors watch New York manufacturing (and other regions, as well) as a possible signal of larger economic upswings or downturns.

For January, the survey's general business conditions index clocked in at 12.5 points, up from December's revised 2.2 reading. . Analysts were pleasantly surprised by the index, having expected only a slight uptick in growth to 3.3. 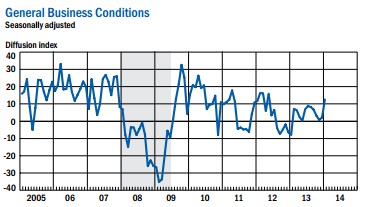 Digging deeper, new orders made a major turnaround, bouncing back to 11.0 from December's -1.7 contraction. As a sign of longer-term confidence and growth potential, the "number of employees" component headed from 0.0 in December to 12.2, while average workweek numbers flipped from -10.8 to 1.2 this month.