Companies like SolarCity are not the monstrous threat you make them out to be, but smarter consumption will sneak up on you.

I'm writing this letter to you because I'm concerned that you're focusing too much attention on SolarCity (SCTY.DL) and the other members of the distributed power movement, when you have a much greater threat knocking at your door. Sure, regulations like net metering may be eating into some of your profits, but the spectre of smarter energy consumption is a much greater threat to you. Even worse, you're letting these threats in right through the front door!

Sweating the small stuff
During the past few years or so, we have all seen you take issues like net metering -- a tool that makes distributed solar viable for many individuals -- to court. Just recently, the state of Arizona ruled that all distributed power installations pay a fee of $0.70 per kilowatt to cover grid maintenance and transmission fees. This isn't the only one, either. In 2013 alone there were other cases against net metering in Idaho, Louisiana, and California. While I can understand why distributed solar can be a perceived threat, you're making a mountain out of a molehill here, and this is why.

Distributed solar isn't that big
SolarCity is, by far, the biggest player in this field; in fact, it's larger than its next eight largest competitors combined. Yet, despite all of the huge waves that you're claiming distributed solar has made, the company's ambitious growth targets for 2018 will only put them at 2.5% of the potential market in just the 14 states in which it operates. 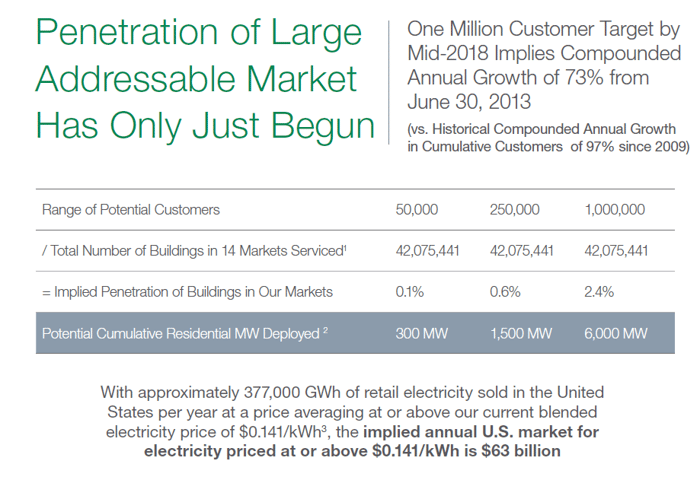 You get to keep your highest earnings period
I'm sure you know this chart by heart because you're the utilities, after all, but let me show it to you again. This is the daily grid load and electricity price range for the Boston metropolitan region, one of the fastest-growing markets for SolarCity. 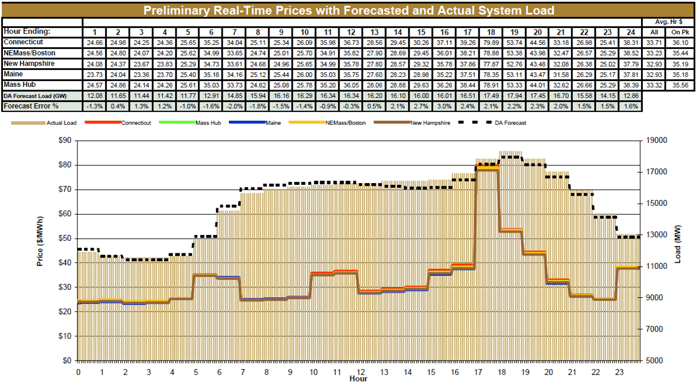 That massive spike in energy use happens right around 5 p.m., and almost anyone who has spent time in New England will tell you that there isn't much sunlight at that time for a good chunk of the year. This is your wheelhouse: Not only do you get to supply almost all of the power at that time, you get a major premium on power then, as well. Renewable energy is working on some methods to capture part of that market, but it's still quite a few years away.

You're taking advantage of it, too
Finally, it's hard for me and others to take these net-metering threats so seriously, because a few of you are doing distributed solar installations yourself. NRG Energy (NRG 1.11%) has already started down the path of distributed solar, and Exelon (EXC 0.26%) is mulling the idea over as part of its $3 billion investment program during the next five years. If anything, these sorts of investments may be more lucrative than the megamillions you're spending on projects like Duke Energy's (DUK 0.09%) coal gassification plant.

Here's what should make you worried
We, as Americans, have started to jump on the energy efficiency/conservation bandwagon. Just look at Google (GOOGL 1.61%) dropping $3.2 billion to purchase Nest Labs. This company's smart thermostat can reduce an individual's energy needs for heating by an average 20%. That may only translate to 10% of the total energy demand for a household, and electricity may only be the heating source for 38% of all U.S. households; so you may not be sweating it right now.

In reality, though, they pose a greater threat, because reduced consumption has an amazing compounding factor. Just take a look at this graphic from the Federal Energy Regulatory Commission. 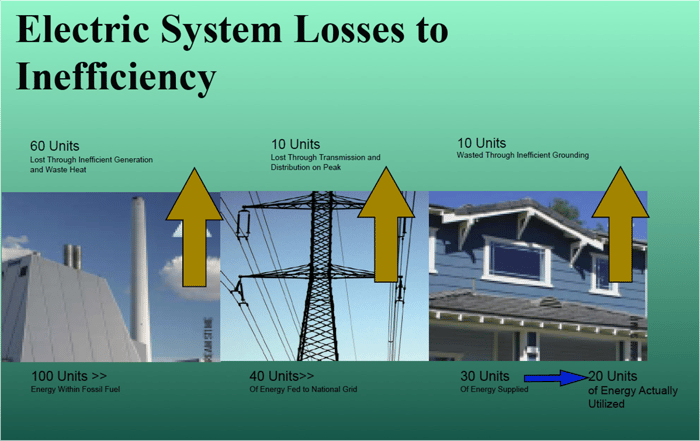 For every 40 units of power you deliver to the grid, only half of it actually gets consumed by us. This means that any reduction in energy use from your customers has a doubling effect on you. Also, the reason that smart energy use products like Nest are so effective is because they can also be used to conserve power during peak loading times, which can deprive you of some of your highest revenue periods. What's even more troubling about these kinds of technology developments, YOU ARE EMBRACING THEM! NRG Energy partnered with Nest earlier last year to provide clients with means to skirt peak power times and reduce total energy consumption.

Sure, these sorts of things may allow you to not fire up a couple of extra peak power generators and save on the high costs associated with them; but, ultimately, these types of movements will start to bite into your revenue streams, and it will make many of the power-generating assets on your books no longer necessary. This, to me, seems like a much greater threat than the 2.5% of customers who SolarCity may take away from you.

What a Fool believes
I'm telling you all of this because, despite all the grumblings I may have when I get my utility bill, I still need you. We all still need you. Even if distributed solar takes off, and individuals use much less energy, we all still need that extra power to get us through peak demand and a durable, reliable transmission grid to get power to everyone. Plus, there are loads of investors out there who would hate to see those fat dividends you pay dry up. You may not get to operate like a monopoly anymore, but I'm sure you'll find a new, creative way to use the assets you have, and remain a necessary cog in America's energy picture.

Fool contributor Tyler Crowe owns shares of SolarCity. You can follow him at Fool.com under the handle TMFDirtyBird, on Google+, or on Twitter @TylerCroweFool.