The largest mobile chipmaker continues to lead the way to a mobile-first world, but that industry may be approaching maturity sooner than investors expected.

Two of the world's largest chipmakers reported earnings last night. Intel (INTC 1.25%) continued its long-term "stabilization" amid the stagnation of PCs and the rise of mobile -- and you can read more about its rather underwhelming performance by clicking here. However, its Eastern fabrication counterpart, Taiwan Semiconductor (TSM 2.96%), also reported earnings, and its long-term trend shows the rise of mobile from the other side of the fence. Here are some of the key figures from Taiwan Semi's report:

All in all, it was a solid, if not unspectacular, report. The company's shares have declined in early trading, perhaps because reported revenue came in lighter than the $4.9 billion Wall Street analysts expected. The weakness might also be easily blamed on what CFO Li Mei He called "inventory correction," which is essentially oversupply and resulted in sequential revenue declines in all but the industrial chip segment, which remained sequentially flat. However, when viewed on a longer timeline, Taiwan Semi shareholders don't appear to have any real reason to be concerned:

Chipmakers tend to be at the mercy of seasonal buying shifts, as Intel's report also shows. However, when viewed in trailing-12-month terms, Taiwan Semi's progress seems much steadier and stronger than its American rival, at least on the income statement. 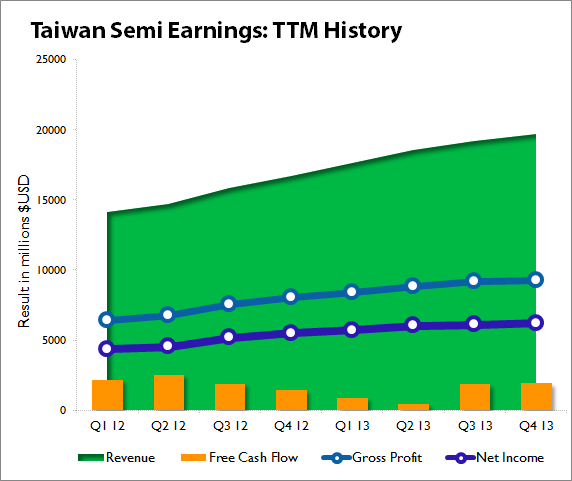 This might, understandably, be blamed on Taiwan Semi's R&D expenses, which had already grown by 42% on a trailing 12-month basis from the third quarter of 2011 to the third quarter of 2013. This is to be expected as the company pushes into 20- and 16-nanometer transistor widths, which (along with some improvement to the current best-in-class 28-nanometer process) have accounted for "about 95%" of capital expenditures in recent quarters. The company currently expects its capital expenditures to remain at similar levels to 2013's, but that may change to the upside if R&D hits any snags.

Taiwan Semi continues to be one of the most important players in mobile, as Intel has historically been in the PC arena. Chairman Morris Chang highlighted the company's mobile segment by leading with a few eye-popping industrywide numbers during his part of the earnings conference call:

This is understandably good news for Taiwan Semi, which expects its total share of the silicon chip produced for smartphones to rise from 45% to 47% in 2014, which will result in a 35% year-over-year improvement in mobile-sourced revenue for the company this year. Chips at 28-nanometer transistor widths will see growth of 20%, but the company will begin rolling out 20-nanometer systems-on-a-chip (SoC) from two of its fabrication plants this year. CEO Wei Che-chia  projected that this new 20-nanometer SoC production line would account for roughly a tenth of the company's revenue in 2014.

Looking ahead, Taiwan Semi now expects revenue to range from $4.49 billion to $4.55 billion, and for operating margin to be roughly 33% (in a 32% to 34% range) for the first quarter. After accounting for a 13.3% full-year tax rate, this should translate to earnings of roughly $1.31 billion. This represents a very modest improvement on the top line of about 3% over the year-ago quarter, but net income looks to be more or less flat. Growth could accelerate later in the year as more 20-nanometer chips are produced, but at the moment, Taiwan Semi's previous growth looks set to slow down in early 2014.

Fool contributor Alex Planes owns shares of Intel. Add him on Google+ or follow him on Twitter @TMFBiggles for more insight into markets, history, and technology.

The Motley Fool recommends and owns shares of Intel. We Fools may not all hold the same opinions, but we all believe that considering a diverse range of insights makes us better investors. The Motley Fool has a disclosure policy.

Taiwan Semiconductor Manufacturing Is Off to a Hot Start in 2023, but Is It Too Early to Celebrate?
415%