As its stocks soars, is anyone paying attention to Pandora’s slowing business metrics?

I have a confession to make: I'm a bit of a Pandora Media (P) stalker.

As someone who closely follows the TMT (technology, media, and telecommunication) sectors, high-growth companies trading at "optimistic" valuations are a dime a dozen. But for whatever reason, I just can't seem to shake my skepticism of Pandora.

For the record, my thinking on the company has evolved over time, and I've publicly owned up to the aspects of Pandora that I just plain misunderstood. It's also worth noting that at least one of the Fool's premium-newsletter services currently recommends Pandora's stock. I'm going out on my own here, and I want to be as transparent as possible.

But as a committed Fool, I maintain you have to look at both the positive and negative aspects of any business to confidently invest in it. And over the last several weeks, it seems to me there are a few dynamics at work that haven't necessarily been part of the investment dialogue about Pandora.

Everyone loves a contrarian, right?

Pandora: A slowing growth story?
The idea for this article actually occurred to me earlier this month, when Pandora reported what were widely viewed as positive monthly audience metrics for December 2013.

In reaction to this and another positive storyline, the company's shares popped 14% on Jan. 6, which is impressive even by Pandora's standards.

Last December, Pandora grew two of its key metrics -- monthly listener hours streamed and monthly active listeners -- by 13% each. Given the rising competition Pandora is facing from the likes of Apple, Google, and Spotify, to name a few, the fact that the company is still growing its business is certainly a positive. But having watched Pandora for some time now, it also struck me that the December 2013 growth figures seemed substantially slower than even those from the previous few months.

So I sifted back through the company's filings to double-check, and it turns out several of Pandora's key metrics have been consistently slowing over the last two years, but few people seem to have noticed. 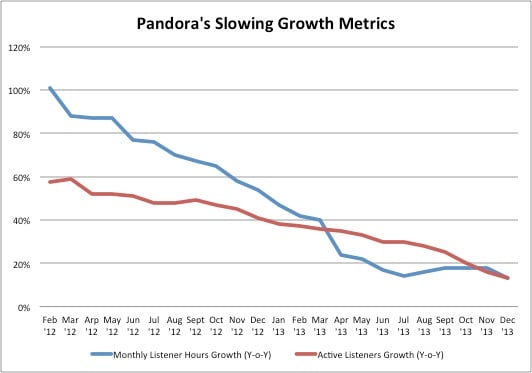 Not exactly encouraging, is it?

Now, it's also important to note this only represents one key aspect of Pandora's business. Because even though Pandora's adoption rates are slowing, the company has also made, and should continue to make, meaningful progress in generating more revenue out of each of its users.

But especially with the other end of its growth funnel closing (adoption), this has the makings of a potential problem for Pandora.

Have Pandora's shares reached bubble territory?
Revenue growth hasn't really ever been a problem for Pandora. It's the lack of progress in turning its sales into profits or cash flow that gets it dinged consistently.

The above time periods are in calendar-year quarters, not Pandora's fiscal quarters. Figures in millions Source: Cap IQ

Now, I understand that asking for a conservative valuation for a high-growth company like Pandora, especially in the midst of today's current bull market, is like asking for sobriety from Keith Richards in the '70s.

It just isn't in the cards.

But the issue that concerns me here is is that Pandora's stock price has been actually climbing much faster than revenue growth over the last year or so. During the last 12 months, Pandora shares have surged around 220%and revenue has increased at somewhere between 50% and 60% each quarter.

Especially in light of the dramatically slowing user growth exhibited above, Pandora will need to continue to generate truly monumental growth in revenue per user in order to justify its present valuations. And as with most businesses, there's typically an upper threshold as to how much revenue can be eeked out from each user.

So, putting all this together, Pandora's story today reminds me of another disruptive growth company from a few years ago.

History repeating?
This is admittedly cherry-picking to a degree, but I think there's a fair case to be made between Pandora today and Netflix (NFLX 1.67%) in mid-2011, before its shares sold off.

In the 19 months between the start of 2010 and July 2011, Netflix's stock rose more than 400%. In a slightly more condensed time frame, Pandora's shares are currently up more than 350% from mid-November 2012 through today.

And perhaps more importantly than surging stock prices, both businesses remained relatively commoditized during their respective rallies. Netflix struck licensing deals for other companies' video content and delivered it in a new way: online. Similarly, Pandora simply licenses music from record labels and distributes it online.

Both Netflix and Pandora were first movers in their respective spaces, introducing innovative and, in many ways, better delivery models for preexisting content. But Netflix shares sank after its growth inspired a host of capable competitors like Amazon and Hulu to strike similar licensing deals with content providers. And in an eerily similar parallel, we've also seen new names like Apple and Google follow Pandora's lead and enter the streaming-music space.

Netflix only truly differentiated itself from the competition when it began producing its own outstanding original content. Unfortunately for Pandora, it seems it's suffering from the same low barriers to entry that eventually caught up with Netflix's high-flying stock some years ago.

Where Pandora goes from here
Now to be clear, I'm not saying Pandora's impressive run will end with the same sell-off that brought down Netflix's shares. I'm not even really against Pandora here; what I am trying to highlight is that the company's growth story has some issues that deserve thorough examination from all investors.

Pandora is a fantastic company, led by innovative management. But as its stock continues to creep upward, investors would do well to eventually add a dash of skepticism for a company that's so priced for perfection.