Watts Water Technologies is looking good in 2014, especially given its commercial construction focus. What's more, peer Pentair looks strong, too. Will 2014 be the year of water products?

The water sector has long been favored by long-term investors who like thematic trends. The critical necessity of water in industrial and commercial applications, and the need for potable water supply for a growing global population means that the sector has strong long-term prospects. However, while the trend maybe upward, the water industry is notably exposed to demand from new housing and commercial construction project, and that hasn't been a great place to be in recent years in the West. However, with these end-markets looking set to pick up in 2014, companies like water products manufacturers Pentair (PNR 0.43%) and Watts Water (WTS 0.16%) look  well placed.

Indeed, a quick look at what analysts have penciled in for Watts and Pentair reveals a positive consensus for the next few years.

Pentair is attractive in its own right, but its forecast revenue mix for 2013 demonstrates that residential and commercial activity only represents 25% of its end market. 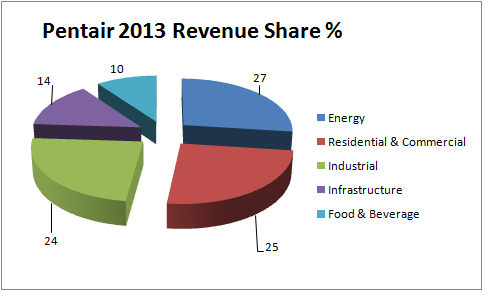 Watts transforms itself
Watts stands out for its cash flow generation. For example, Watts has converted around 150% of net income into free-cash flow, or FCF, over the last three years.

Assuming that  Watts converts 130% of net income into FCF in future, and using these rates and analysts' earnings-per-share forecasts from the table above, can give an idea of FCF per share. For the sake of simplicity, assume that EV is equivalent to current values. 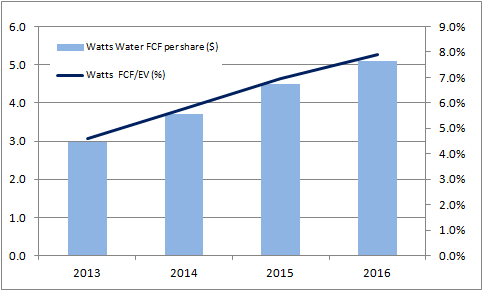 Watts Water looks like a good value. The impressive thing about Watts is that although its trailing-12-month revenue of $1,452 million is marginally above its 2008 level of $1,432 million, the company has increased gross margins from 33.7% to 36.1% over the period.  In other words, should revenues start to increase in the future, Watts has a good opportunity to generate higher profits thanks to better margins. Moreover Watts generates 50% of its revenue from commercial operations, so it's heavily exposed to a pick up in commercial construction.

On a more negative note, Watts generated only 52% of its sales from the U.S. in 2012 with 40% coming from Europe, the Middle East and Africa, or EMEA. In fact, its guidance for 2013 assumes that EMEA will decline by 4%-5% with North American core business sales estimated to grow 3%-5%. While Europe is likely to remain soft, Watts will come up against some easier comparisons in 2014. In addition, in its latest investor presentation, management outlined that "overall market confidence appears to be improving" in EMEA, while is North American commercial market is "starting to see signs of a pick-up".  Both statements are good signs.

The bottom line
If you are looking for an overall industrial play then Pentair is worth a closer look, but for a developed market play on a resumption in residential and commercial construction spending then Watts is better placed. The company has internally transformed itself over the last few years in order to improve cash flow generation and its return on invested capital. As long as the U.S. housing market remains in recovery mode, it's a good bet that commercial construction will follow, and Watts is well placed to outperform.