Investors should always take a long-term approach when it comes to building a portfolio, and that's exactly what investors will need to do when looking at AstraZeneca (NASDAQ:AZN). Stiff patent expiration headwinds mean the company won't see revenue return back to 2013 levels until 2017.

But strategic moves, including acquisitions, collaborations, and cost cutting, may make AstraZeneca worthy of consideration given the company may enter 2017 far more profitable than it is today.

Blunting expiration blows
It's hard for one deal to dramatically reshape a big company like AstraZeneca, but that may be what happened when the company bought the half of its diabetes joint venture it didn't own from Bristol-Myers Squibb (NYSE:BMY) in December.

Bristol's share of the diabetes partnership didn't come cheap. AstraZeneca handed over $2.7 billion up front and promised another $1.4 billion if the business hits certain future targets.

However, that $4.1 billion promise gave Astra the share of a handful of top selling diabetes medications that could significantly impact revenue as the global population of diabetes patients grows.

Included among those medications is Onglyza, approved in 2009,  and Farxiga, which was approved by the FDA earlier this month and is already sold overseas as Forxiga. The acquisition also brings along complete control over Byetta and Bydureon, two drugs acquired in Bristol and Astra's $7 billion acquisition of Amylin Pharmaceuticals in 2012.

All combined, the joint venture generated $1.2 billion in sales for Bristol in the first nine months of 2013. The addition of those sales to Astra's revenue this year helps calm fears over lost revenue from the pending patent expiration for its $4 billion a year blockbuster drug Nexium. A bit more than $2 billion of Nexium's sales come from the U.S., where the drug will face generic competition beginning in May.

Further out, AstraZeneca hopes growth from the diabetes platform will also help protect it as it loses protection for another blockbuster, Crestor, in 2016. Crestor had sales of more than $6 billion last year.

Tightening purse strings
AstraZeneca is admittedly top heavy. The company's operating margin is above 40% and that's well above Bristol's 31% rate. It's also much higher than Merck (NYSE:MRK), a company that competes against AstraZeneca with its highly successful diabetes drug Januvia. Januvia had sales of nearly $2.9 billion in the first nine months of 2013, making it Merck's best selling drug. 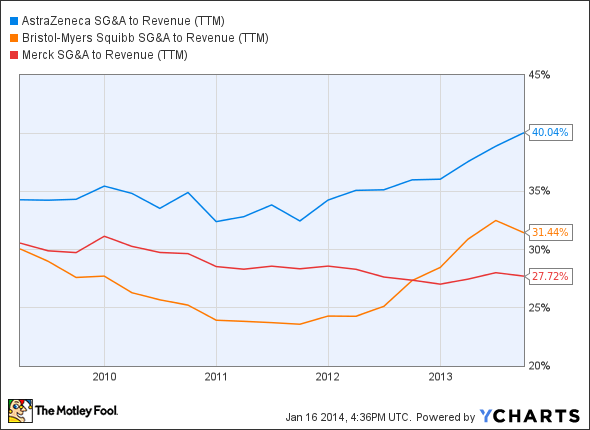 Recognizing the disparity in costs versus its peers, AstraZeneca plans to tighten the lid on expenses. A restructuring that includes consolidating R&D and cutting more than 2,000 jobs has the company targeting SG&A of roughly 30% of sales.

Bringing products to market
Across indications including oncology, diabetes and respiratory diseases, Astra has 11 ongoing Phase 3 programs, roughly double its levels from last year. It also has 27 phase 2 programs under way. . That should provide a solid runway of new drug candidates, given 50% of late stage drugs tend to make it to market.

One of the more intriguing drugs in that pipeline is olaparib, a drug being studied as a treatment for ovarian and gastric cancer. After failing a phase 2 study in 2012, olaparib has been repurposed to target patients with a specific gene mutation. The company expects to file for olaparib's approval for ovarian cancer this quarter.

Astra also has cancer compound selumetinib in phase 3 for patients with advanced or metastatic non-small cell lung cancer. The company hopes to be able to file that compound for FDA approval by 2017.

Another potential money-maker for Astra is brodalumab, which is being co-developed with Amgen (NASDAQ:AMGN). Astra paid Amgen $50 million up front for the opportunity to work on brodalumab and four other monoclonal antibodies in Amgen's inflammatory pipeline in 2012.

Brodalumab is in phase 3 trials for psoriasis, a multibillion market given it affects 125 million people worldwide. The indication has been a major source of revenue for Amgen's blockbuster drug Enbrel, which generated sales north of $1 billion for the company in the third quarter. Astra estimates it will file for approval of brodalumab in 2015.

Fool-worthy final thoughts
In a bid to actively rebuild its pipeline, Astra is acquiring or partnering with emerging biotechnology companies. In the past year, Astra has acquired Pearl Therapeutics and fish oil specialist Omthera Pharmaceuticals.

It's also working on antibody-drug conjugates, a promising approach for targeting cancer cells without damaging healthy cells; it's working with Spirogen and ADC Therapeutics to develop potential candidates.

But there's a tremendous amount of work to do to make up the ground that will be lost from Nexium and Crestor over the next few years. And plenty of competition is making its way through diabetes trials, including MK-3102 from rival Merck. That suggests investors may want to pay particular attention when Astra outlines its strategy more in its full year review of results in early February.