Obamacare's costs are coming in below those of other major American safety-net rollouts, and its long-term benefits have yet to be fully understood.

Is Obamacare a big flop? That depends on whom you ask.

The program's proponents can point to an estimated 9 million newly insured Americans -- 3 million who are now covered under their parents' plans until age 26, 2 million who've bought policies on the Obamacare exchanges, and more than 4 million now signed up for Medicaid -- as proof that Obamacare is having its intended effect. Opponents note that the low percentage of young enrollees undermines promises of a better risk pool, to say nothing of the program's exorbitant costs, which include anywhere from about $300 million to more than $2 billion just to set up and operate the maligned Healthcare.gov website.

But if you ask political historians, you might be surprised. The United States has been rolling out major new social-insurance programs for eight decades now, beginning with Social Security's first tax levies in 1937. While Social Security and the Medicare-Medicaid combination were certainly more ambitious reforms than Obamacare from a coverage and governance perspective, their early costs and rollout hiccups can be instructive for anyone fretting about costly "death spirals" or unintended budgetary consequences. And there were hiccups.

Social Security and the Roosevelt recession
President Franklin D. Roosevelt signed the Social Security Act into law in 1935, but the program began collecting taxes in 1937. That year, $767 million flowed into federal coffers from new taxes, but nearly no one received benefit payments, which were paid as one-time lump sums until 1940. This was one of the largest tax increases in modern history, if not the largest -- federal tax receipts soared by 72% from 1936 to 1938, and government balanced-budget efforts, implemented at the same time, caused a sharp and devastating "Roosevelt recession" that undid much of the progress made to that time against the Great Depression.

The best way to compare this new cost to Obamacare is to look at nominal national GDP in 1937 and GDP today. Social Security's new taxes hit so hard and so rapidly that the economy was already sliding into recession by the time 1937's first-quarter GDP numbers were known. However, even at the year's high-water economic mark, Social Security taxes amounted to nearly 1% of the economy, and this was simply to begin collections for a program that was set to cover only half of the workforce.

A $2 billion hit in 2014 for Obamacare program maintenance doesn't come close -- it's barely a hundredth of 1% of the most recently reported GDP figures. Even if you add in the Congressional Budget Office's estimates on Obamacare's total costs -- which includes Obamacare exchange subsidies and new outlays for Medicaid and other programs -- the new total of $51 billion is still only a third of 1% of American GDP. That might pinch the economy, but it's not likely to hurt growth the same way that Social Security did in its first year of tax collection. 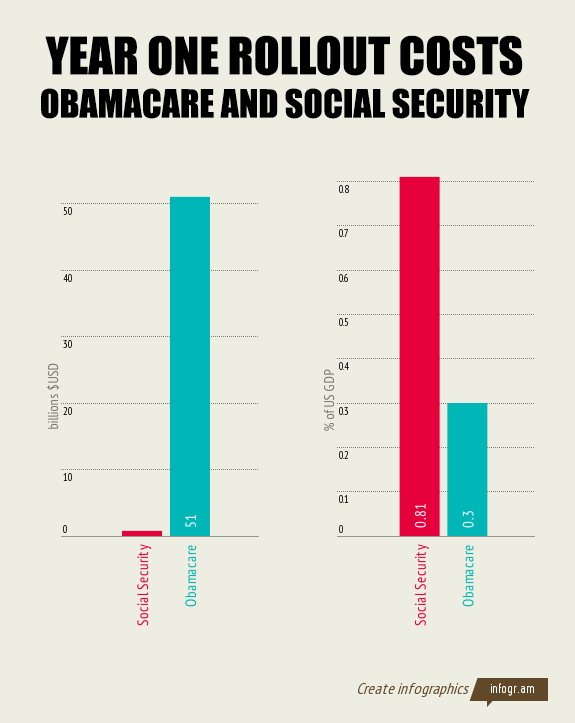 The Medicare-Medicaid rollout "stumble"
Obamacare supporters can also take heart from the problems of its progenitor: Medicare and Medicaid, which were signed into law in 1965, hit a number of snags on their 1966 rollout. Stephen Mim, writing for Bloomberg last fall, noted:

For starters, few in the government seem to have realized that more than 45% of those born between 1890 and 1920 couldn't prove their age because they lacked birth certificates. ... In the fall of 1965, millions started to enroll, no doubt aided by the reasonable ease -- perhaps too easy -- of proving one's age. But ignorance of how the law actually worked became a serious problem by that time. More than 700,000 of those eligible for supplemental coverage refused to sign up in the opening months. ... [M]any older people believed that signing up for Medicare meant they would cease receiving Social Security. Others thought they couldn't afford the $3 monthly premium, even though the law had provisions to assist low-income enrollees.

As the date for Medicare's formal beginning approached, more serious problems cropped up. The most serious was a campaign by many doctors to boycott the program. In the months leading up to the final legislative debates, and after, the American Medical Association faced a revolt in its ranks over the issue, though it reluctantly endorsed cooperation. The Association of American Physicians and Surgeons, organized to combat "socialized medicine," came out against the law, urging "nonparticipation." The organization predicted that 50,000 doctors nationwide would refuse to play ball.

Many of these problems were, of course, overcome without any of the catastrophes now predicted for the smaller and more conservative Obamacare rollout. However, the costs of Medicare and Medicaid combined in 1966 added up to $2.2 billion, or about a third of 1% of national GDP that year. This is in line with Obamacare's anticipated total costs this year, but there's one caveat: Real per-person medical spending was a heck of a lot lower in 1966 than it is today.

Roughly 23 million people signed up for Medicare and Medicaid in 1966, which means that total per-person program costs were just $96, which would be $671 today after adjusting for inflation. Obamacare's per-person costs, on the other hand, currently hover around $5,400 if we count every new enrollee across all programs -- and enrollment numbers are certain to rise throughout the year, putting significant downward pressure on the final figure. Still, that does seem much higher than early Medicare and Medicaid spending, doesn't it?

However, when we look at present-day per-person program costs in Medicare and Medicaid, we discover the new cost realities of the American health-care system: In 2012, Medicare and Medicaid combined for $994 billion in federal spending, and since an estimated 109 million individuals are enrolled in one or both programs, they received an average of $9,200 each in benefits. If we deflate that figure back to 1966-equivalent levels, then each new enrollee would have received a staggering $1,300 in nominal 1966 spending, an amount more than 13 times higher than the actual amount spent that year per enrollee. Summed up across 23 million enrollees, that would have equaled nearly $30 billion, or nearly 4% of American GDP in 1966. We can't truly compare the Medicare and Medicaid rollouts with Obamacare's rollout because health care has become a much larger part of the American economy.

Modern parallels with valuable lessons
It's also worth considering the parallels between Obamacare and Medicare Part D, which was the last major effort at health-care reform and which began operation in 2006. That program was somewhat more limited in scope than Obamacare, as it simply attempted to expand prescription drug coverage, but the 10.4 million enrollees who received first-year coverage still accounted for $3,800 in government spending per person in 2006 -- and that was just for prescription drugs! However, over time, this cost has actually declined modestly per person. In 2013, about 18 million Medicare Part D enrollees received roughly $4,000 in spending per person, which comes in a bit below the $4,400 per person we'd see if we adjusted 2006's spending for inflation. That's good news for Obamacare boosters, who've often touted the cost-bending benefits of the program's new negotiating powers against the sprawling health-care industry.

Will Obamacare be a big flop? Will it do everything its backers hope, and more? It's too early to tell, but when you look back at earlier efforts at social insurance in the United States, it doesn't look like quite so bad a deal.