A printer that costs less than an iPad is the first step on the road to destroying profit in 3-D printing hardware.

Two years ago, 3D Systems (DDD 1.38%) launched its first consumer-focused 3-D printer at the Consumer Electronics Show. That was the moment the 3-D printing industry began to move toward widespread adoption. This year, a $499 3-D printer made by Taiwan's XYZPrinting debuted at CES. Billed as a true plug-and-play system, XYZ's da Vinci printer boasts superior print fidelity (at its slowest print speed) to the Cube for a fraction of the price.

The $1,300 Cube, which accounted for 10% of 3D Systems' third-quarter revenue, competes directly with the MakerBot, a recent Stratasys (SSYS 3.00%) acquisition that reported similar revenue figures to the Cube shortly before its buyout. The cheapest MakerBot, a "mini" model yet to launch, costs slightly more than the entry level Cube. (Other Cube models compete with the typical $2,000-plus MakerBot.) Both of these machines, which are collectively touted as the next big thing in 3-D printing, now look like costlier, less-capable versions of an unknown device produced by an Asian upstart.

Doesn't this remind you of the PC price wars all over again?

Hardware on the firing line
A year ago, I pointed out enthusiasm for 3-D printing technology and stocks had already far outpaced what was then possible. I also noted that 3-D printing, which relies on both hardware and software improvements to drive wider adoption, resembles nothing so much as the progression from large, commercial-scale mainframe computers to inexpensive desktop PCs. Investing in hardware-focused enterprises right as the industry shifts from one model to the next could be a recipe for long-term losses. Thus far, I've been wrong on that count, as both 3D Systems and Stratasys have soared in the past year: 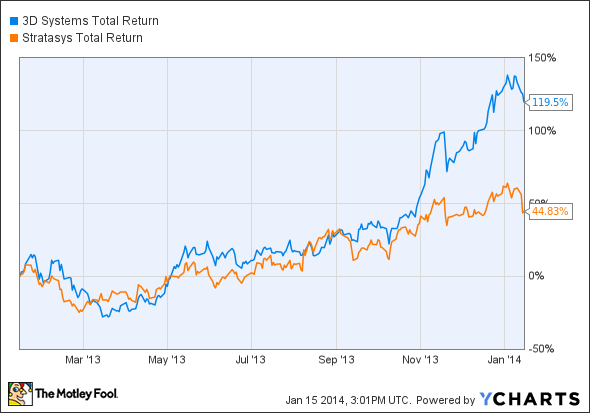 But much of the excitement shown on public markets toward 3-D printing hasn't been directed toward consumer 3-D printing, but more commercial 3-D printing companies: million-dollar printer builder ExOne (XONE) has doubled since its IPO last spring, and large-scale 3-D printer maker voxeljet (VJET 13.79%) clings to a 40% gain since its October IPO, after a one-month double was undone by weak guidance. Aside from the Cube and MakerBot, which are both smallish consumer subsets of the two largest commercially focused 3-D printing companies on the market, most consumer 3-D printers are typically more hobby kits than complete plug-and-play systems.

The da Vinci, which is made by a subsidiary of the multibillion-dollar Kinpo Group conglomerate, is probably only one early salvo in what's certain to be a barrage of lower-cost and higher-capability consumer 3-D printers. While these models will never have the sheer size of the large commercial models (ExOne's largest model tops out at 155 times the total "build volume," or 3-D printable area, as the da Vinci) the progression toward cheaper models does point toward the inevitability of a 3-D printer price war. Another factor in this inevitability is the simple fact that some very important 3-D printing patents expire this year, opening up a new avenue of low-cost competition.

The da Vinci, Cube, and MakerBot all use fused deposition modeling technology, which went off-patent several years ago. In fact, the MakerBot's rise would not have been possible if FDM had remained patented. This year's patent expirations involve laser sintering, which is a more advanced and accurate form of 3-D production. Some laser sintering patents cover (or will have covered) a high-end desktop machine called the Form 1, which I covered more than a year ago and which uses stereolithography, a different form of laser-based printing. This higher-capability printer is nearly an order of magnitude more expensive than the da Vinci. In a few years' time, the lack of patent protection should bring costs on laser-based 3-D printing down to the price of a new iPad, if not lower.

If 3-D printing becomes common in the home, it won't be because of today's large companies pushing proprietary models -- it'll be the result of a commodification process similar to what happened during the rise of the PC. American manufacturers found themselves pressured on price by a growing group of hungry foreign competitors, and eventually the PC became a commodity with razor-thin margins in which American manufacturers couldn't really compete. The real profit in the PC industry was eventually found in software, and it's quite likely that software and services will become the profit engines of 3-D printing as well. It won't matter whether that software runs on commercial-scale machines in on-demand manufacturing centers or on millions of small desktop printers -- once commodification kicks in, it'll push the profits out of hardware, as it has many times in the past.