Charter Communications wants to buy Time Warner Cable (NYSE: TWC), and the spat over Charter's offered price went public last week. Regardless of whether Charter ultimately becomes the buyer, Time Warner needs to drop its resistance to a buyout. Time Warner recently announced another subscriber slip as the company continues to fall behind Comcast (CMCSA 2.23%). How bad has the subscriber loss gotten?

During a recent investor conference, Time Warner Cable announced that video subscribers dropped about 215,000 in the fourth quarter, while voice and high-speed data added 15,000 and 55,000 subscribers, respectively. The numbers showed improvements over prior quarters but still don't paint an optimistic picture for the future. And Comcast used the same conference to hint at gains across all service segments.

Two charts can show Time Warner's subscriber-retention problems and why it's time for the company to sell.

Subscriber battle: Time Warner vs. Comcast
Time Warner Cable was spun off from Time Warner in 2009, so the cable company has a simpler overall business model than Comcast. Subscriber segments include video, voice, and high-speed data. Time Warner breaks these down into residential and business customers, but I've added the two together to make the data more comparable to how Comcast breaks out its numbers.

Here's a look at how many net subscribers Time Warner Cable has added -- or lost -- over the past three years: 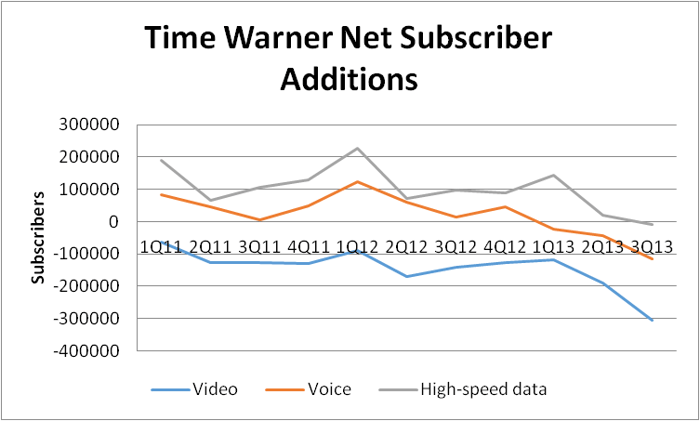 That's not a pretty picture. Time Warner hasn't added video subscribers in more than a dozen quarters. But even the once-strong high-speed data segment has dropped to new lows recently. What's driving customers away from Time Warner?

The company hasn't invested as much in its infrastructure as other cable or satellite companies and that's the long-term reason for the subscriber dive. But part of the problem also comes from the steep promotions Time Warner Cable uses to lure in new subscribers.

During the first half of last year, Time Warner suffered an overall subscriber drop thanks to the expiration of a promotional deal that had lured consumers into signing up for its triple-play service. Those customers cancelled voice -- or the entire service -- as soon as the short-term, lower pricing expired. And early 2014 could suffer a similar drop due to a holiday promotion that offered new and upgrading customers a free Samsung tablet.

But Time Warner has also suffered from a weakening of the cable industry, as more consumers turn to cell phones instead of landlines or opt out of cable packages in favor of streaming Netflix or Amazon Prime.

How has Comcast performed in this same environment? 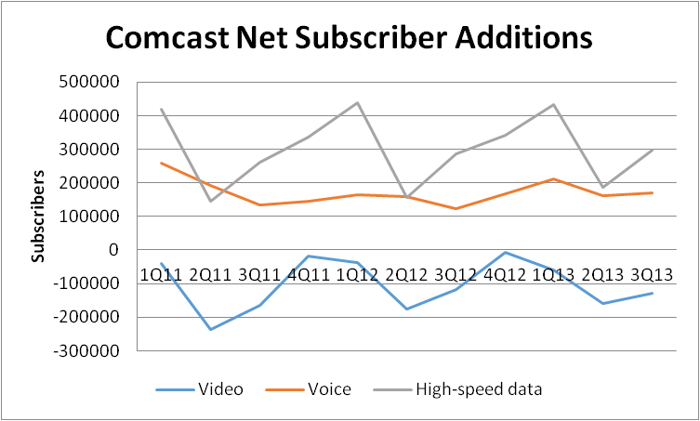 Comcast's video subscriber retention has suffered worse than Time Warner at points, but that's offset with more stability in the voice and high-speed data segments. And Comcast's cable services still exist as a small portion of a large media company. So, the overall business isn't as reliant on these numbers.

Foolish final thoughts
Now isn't a great time for any cable company, but Time Warner Cable doesn't have any other business segments to help balance the losses. The company hasn't invested properly in its infrastructure and the current business isn't strong enough to fund that future endeavor. It's time for Time Warner Cable to cozy up to a buyer.

Here's Why Hanesbrands Stock Dropped Like a Rock Today

Why Fiverr Is Soaring 16% Higher Today