Nu Skin, Best Buy, and SodaStream took a tumble in the last few weeks. One or more of them might be a much better investment after the fall.

No one wants to own a stock that's falling, but if you invest long enough, it's inevitable -- even the best investors have had their share of stinker stocks. But just because a stock is hurting today doesn't mean it's bound to drag your portfolio down forever. It's important to distinguish between stocks that are on their way to oblivion and those that are simply waiting for the right piece of news to soar again.

Today we'll look at three stocks with the worst losses on the market over the past month of trading. They might have just become great investments, but the reasons for their collapse might also have made them too dangerous for your portfolio. We won't know until we dig deeper, so let's get right to it.

Best Buy
Best Buy's post-earnings slaughter might have been one of the bloodiest butcheries performed on any major retailer in recent memory. The big-box electronics superstore earlier this month gave up most of the huge gains it earned over the previous year after reporting that its big gamble -- a "strategic investment" to "win the holiday season" -- led to a drop in revenue, profit, and same-store sales for the fourth quarter. Investors who rode Best Buy optimism through 2013 would have none of it: 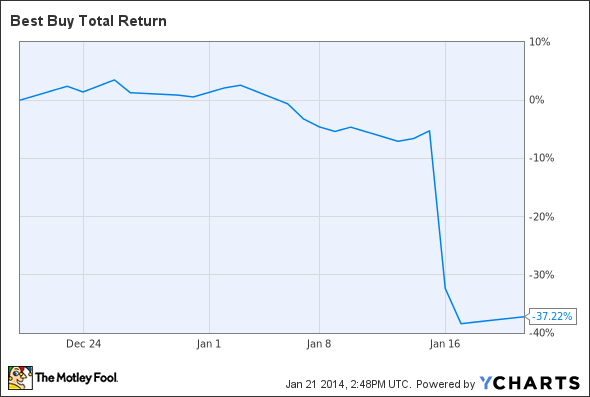 So what does this mean for Best Buy investors today? Longtime Fool contributor Rick Munarriz notes that Best Buy was only the latest in a string of lousy electronics-retailer reports, but Best Buy was a dynamite stock last year because investors expected the company to avoid the same problems plaguing its competitors. However, Fool contributor Timothy Green points out that Best Buy's online sales surged in the fourth quarter, and notes that the market seems to have overreacted to the company's weak quarter just as it overexpected big things from its turnaround strategy. Still, this doesn't look like a great environment for brick-and-mortar retail stocks, and Best Buy hasn't offered investors a clear path out of the muck.

Nu Skin
Nu Skin began its free fall at the same time as Best Buy -- its first big plunge took place the day before Best Buy's report, but the misery kept up for a second trading session, and then a third, which combined to shave off all the gains the formerly highflying stock had made over the second half of 2013. The cause of this collapse was a Chinese investigation into whether the personal care product company operates as a pyramid scheme. 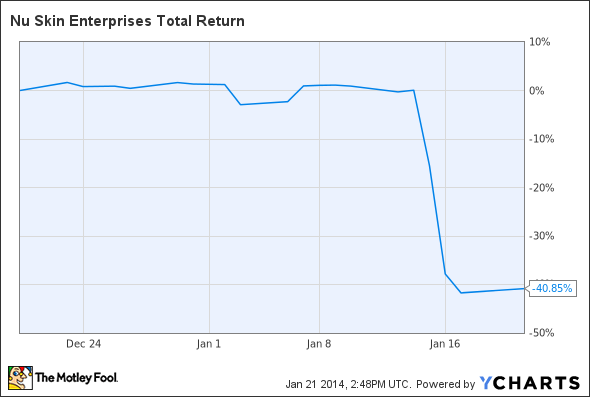 This calls to mind the high-profile battle between hedge fund honchos Bill Ackman and Carl Icahn over Herbalife (HLF 0.77%). Ackman accused Herbalife of essentially being a pyramid scheme in a blistering presentation delivered late in 2012 that sent the stock plunging, before Icahn (and other billionaire investors) leapt to its defense. In the past year, Herbalife stock has gained 67% -- but the recent Nu Skin revelations sent its shares tumbling as well. While American regulators may not be too interested in reining in Herbalife's dodgy "affiliate" sales model, Chinese authorities have been notoriously hard on foreign companies, regardless of the validity of their underlying businesses. Nu Skin's shares may already be at the start of an Herbalife-like rebound from those accusations, but it wouldn't be a good idea to bet on the leniency of Chinese regulators.

SodaStream
Unlike the two former highfliers on this list, SodaStream was already well on its way to a lousy year before the recent release of its preliminary full-year results showed weakness across the board. After peaking at a near-60% gain heading into the summer, SodaStream's shares spent the latter half of 2013 falling back to even. Last week's report was the nail in the coffin, and investors who bought in a year ago are now looking at a rather ugly loss: 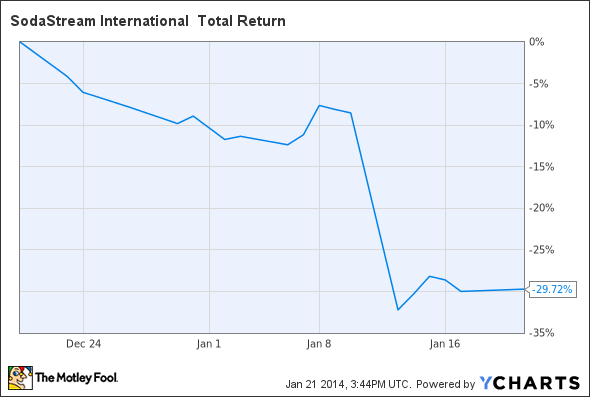 Longtime SodaStream bull Rick Munarriz had already warned that the company was perhaps suffering unnecessarily harsh repercussions despite maintaining a generally strong growth trajectory. After the report came out, he pointed out that margin weakness (the result of fewer refill sales) indicates a more difficult sales environment ahead, regardless of top-line growth (which was also disappointing relative to historical norms).

A week after the crash, Fool analyst Blake Bos highlighted widespread fears of faddishness and a weak competitive advantage against easily procured and inexpensive canned sodas from major beverage makers as the real reasons for the crash. It's hard to argue with this analysis -- when your primary competition can literally be found in every single convenience store in the country, you'll always have an uphill battle to prove your staying power. SodaStream could rebound, as Green Mountain Coffee Roasters (GMCR.DL) did two years ago from similar concerns, but it's important to note that "good coffee" and "good soda" involve rather different considerations for most consumers, and the cost of replacement for "good soda" is typically much lower than it is for "good coffee." A can of Coke can cost a few dimes when purchased in bulk, while a venti latte can easily cost $5. Of these three big losers, SodaStream is the most compelling turnaround play -- but that's not saying much.

The Motley Fool recommends Green Mountain Coffee Roasters and SodaStream. The Motley Fool owns shares of SodaStream and has the following options: long January 2015 $50 calls on Herbalife Ltd.. We Fools may not all hold the same opinions, but we all believe that considering a diverse range of insights makes us better investors. The Motley Fool has a disclosure policy.