Though the mega-insurer had plenty to boast of, investors fled the stock in droves following its earnings report Tuesday.

By the 1.7% drop in the Travelers Companies (TRV -1.74%) share price, investors might think the insurance giant missed big with its earnings release Tuesday. But they would be seriously wrong.

Estimates-slayer
Travelers reported record levels of net and operating income per share for the fourth quarter and full year 2013. The full-year results tapped out at $988 million, versus a measly $304 million in 2012, with EPS of $9.74 well above the Wall Street consensus of $9.08.

The quarterly results were even more surprising than the full-year ones -- with EPS during the fourth quarter of $2.70 triple that of the previous year's quarter.

The fourth quarter proved to be a good one for the insurer, with both sales and investment income experiencing a lift compared with the previous few quarters. Sales were up in each segment of Travelers' operations, with the personal insurance segment reaping the rewards of the newly introduced Quantum 2.0 auto insurance product.

Investment income benefited from the boost in interest rates during the quarter, which led to improvements in the company's variable portfolio, featuring both private equity and real estate partnership investments. Though this segment of Travelers' portfolio is comparatively smaller than its fixed-income investments, the gains offset the adverse effects of lower reinvestment rates for the larger allocation to fixed investments.

Net written premiums -- or NWPs, the premiums paid by existing customers -- was up 5% compared with the fourth quarter of 2012, but this was largely due to the addition of Dominion of Canada General Insurance Company, which closed in November. Improvements in NWPs were seen in each of the insurer's segments, with the exception of personal insurance.

Investor storm brewing?
The insurer is destroying analyst estimates, so why would investors react so negatively to the earnings report? Two words: catastrophic losses -- namely, the conspicuous absence of big catastrophic losses during the fourth quarter of 2013 versus 2012.

If you remember, Hurricane Sandy caused a huge burden on insurers during the final quarter of 2012, with Travelers tallying more than a billion in losses related to the storm. So with only $53 million in catastrophic losses on its books for the final three months of 2013, there's a clear reason the insurer swept the Wall Street analysts.

The problem with this scenario is that the level of weather-related catastrophic losses is not something the insurer can control. And with the increase in severe weather incidents over the past few months (get ready for another winter storm, Northeasterners), there's little the insurer can do to avoid another Sandy-like loss.

The impact of a huge catastrophic storm could have easily wiped out the insurer's record earnings it enjoyed during the fourth quarter. Luckily for the insurer (and those living along the Atlantic), it's been a very quiet hurricane season so far.

No time to panic
One of Warren Buffett's best-known saying is "Be greedy when others are fearful and fearful when others are greedy." The big drop for Travelers' stock following the company's earnings report Tuesday morning is just one more example of fearful investors following each other out of a worthwhile investment.

The insurer's main focus on product returns should be reassuring enough for investors -- there is little distraction for management when it comes to how its products should perform. As demonstrated by its deep analysis of the company's products, the C-suite is pursuing every course that would improve the returns of under-performing segments. Based on the changes made in 2013 to pricing structure and other tools, Travelers estimates the following changes in its products' returns: 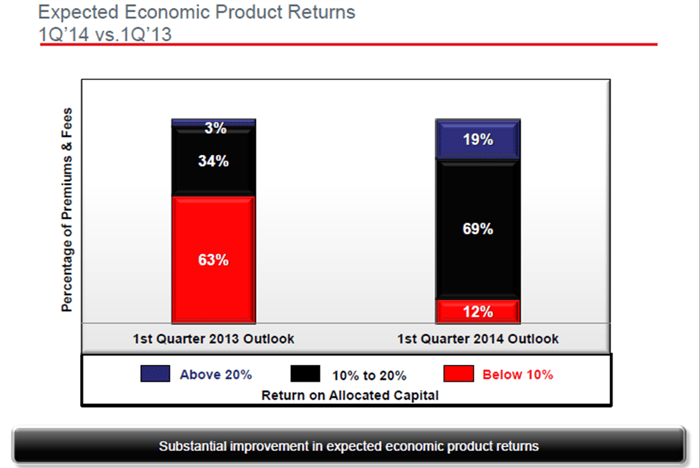 From the first quarter of 2013 to the current one, management's changes to the company's products has generated a huge shift in the performance of each product's returns. Before the changes, more than 60% of the company's products provided an estimated return below 10%. That tranche has dropped to 12% within the past four quarters.

Getting your share
Having a majority of its products providing a return greater than 10% allows Travelers to realize a secondary goal: returning excess capital to shareholders. During the fourth quarter, the firm repurchased 11.4 million shares for a solid $1 billion price tag. For the full year 2013, the total capital returned to shareholders jumps to $3.1 billion, including both share repurchases and dividends. The company also announced a quarterly dividend of $0.50 per share, to be paid out on March 31.

With the company's goals focused on big returns from each product and, more specifically, each account, there's plenty of evidence that there will likely be more capital headed to investors in the coming year. And the remaining $4.8 billion capacity in the company's share repurchase authorization is just the beginning.

Fool contributor Jessica Alling and The Motley Fool have no position in any of the stocks mentioned. We Fools don't all hold the same opinions, but we all believe that considering a diverse range of insights makes us better investors. The Motley Fool has a disclosure policy.