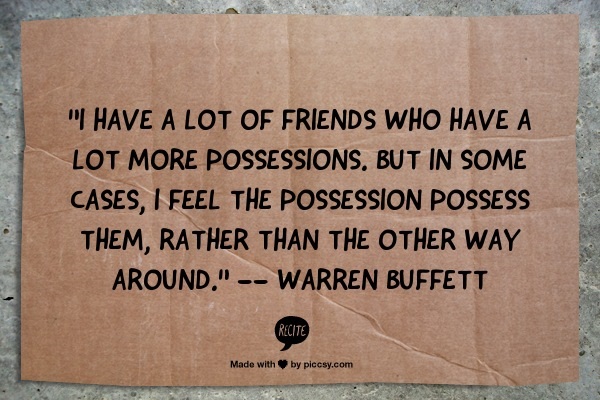 Gary Kremen founded online dating site Match.com. When The New York Times interviewed him in 2007, he was 43 years old and worth $10 million. Still, he didn't feel rich. He lived in Silicon Valley with friends who were far richer. Kremen "logs 60- to 80-hour workweeks because, he said, he does not think he has nearly enough money to ease up," the Times wrote. "You're nobody here at $10 million," Kremen said.

Now meet Pete, who doesn't want to give his last name. He's 39 years old and has been retired for almost a decade. He lives in Colorado with his wife and 8-year-old son in what he calls "a badass life of leisure." Pete and his wife quit work at age 30 when they owned a house outright and had around $600,000 in investments, generating enough money to spend $25,000 a year for life, "which goes quite far if you have no rent or mortgage to pay" he told MarketWatch this week.

Wealth is relative. Those are probably the three most important words in personal finance. Gary makes $25,000 a week and feels inadequate. Pete makes $25,000 a year and feels so rich that he retired eight years out of college. How rich you are has very little to do with how much money you have in the bank and a lot to do with your expectations of what you need that money to do for you. It's a two-part equation, and a lot of people become miserable ignoring the second part.

I've seen this firsthand. During college I worked as a valet at a private country club. The clientele had more money than I could dream of, with private jets, yachts, and Lamborghinis. But the more I worked with them, the more I realized they were some of the most unhappy, uptight, stressed, and unsatisfied people I had ever met. Part of this is because they were Type-A personalities who couldn't slow down. But part of it was because for every dollar of wealth they gained, they moved the goalpost of success two dollars down the field. The only thing that grew faster than their bank accounts was their burning desire for another house, another car, and another boat. Anyone in that situation won't feel rich, regardless of how much money they have. It's worse than running in circles. It's running backward, 60 to 80 hours a week. A person who makes $50,000 a year but only needs $30,000 to be happy is much richer than the person who makes $1 million but needs $1.1 million. This seems obvious, but it's shocking how many people ignore their expectations when trying to improve their financial lives.

It's simple psychology. After basic needs are covered, each dollar in extra income doesn't produce much extra happiness because you get used to your new car and nice clothes pretty much overnight -- it's called the hedonic treadmill. But what does increase people's happiness, more than almost anything, is having control over your time, autonomy in your work, and flexibility in your schedule. The wealthy folks at my country club didn't feel rich because the more money they made, the more stuff they wanted, which required them to work harder, which made their lives more busy and complicated. Pete felt rich because he kept his expectations low and used his modest savings to take complete control over his time and retire at 30. Here's how he put it:

The quickest way to turn things around [in your financial life] is to realize that you are in much more control than you realize. The time to reach retirement depends on only one thing: your savings rate as a percentage of your take-home pay. And this depends entirely on how much you spend. So the moment you can learn to live a less expensive life, suddenly the clouds clear up and the financial picture brightens considerably.

This doesn't mean everyone should learn how to be happy sleeping in a tent and living off cat food. I don't want to live like a monk. But regardless of how much money you think you'll need to be happy, the key to feeling rich and staying rich is allowing your money to grow at the same rate as -- or faster than -- your desire to spend it. The people who feel the richest have a relationship with money that looks like this: 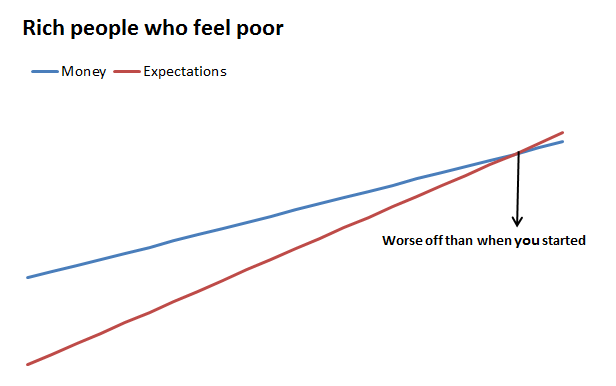 Kurt Vonnegut and novelist Joseph Heller were once at a party hosted by a billionaire hedge-fund manager. Vonnegut pointed out that their wealthy host made more money in one day than Heller ever made from his novel Catch-22.

Heller responded, "Yes, but I have something he will never have: enough."

Most of us would be better off with more of that kind of thinking.