Please ensure Javascript is enabled for purposes of website accessibility
Log In Help Join The Motley Fool
Free Article Join Over 1 Million Premium Members And Get More In-Depth Stock Guidance and Research
By Dan Newman - Jan 21, 2014 at 10:45AM

Even though vertical integration is new to digital companies, it's becoming a must.

Vertical integration, when a business takes control over steps further up and down a supply chain, can give a business strategic control over quality and access to resources. For many industries that produce physical goods, the strategy of vertical integration has been around since Carnegie Steel and Standard Oil. But in a new era when more things are built with code instead of steel, and run on processors instead of oil, the idea of vertically integrating is just getting started. And the companies that are able to jump on this trend are the ones that will be the most likely to succeed.

What digital vertical integration looks like
Even though the Internet doesn't seem like it takes physical resources, some companies have crawled all the way up their supply chain to the very beginning where resources need to be harvested. Facebook (META 0.37%), the humble social network website, is building a 138 megawatt wind farm to complement its new data center in Iowa. Facebook won't even have to rely on power companies outside of its control to deliver its service.

The next step is delivering this data to its consumers, and typically, this happens through a different telecom company's "pipes." The wires that connect servers and computers across the world comprise a vast, complicated network complete with undersea cables. And, to further control its digital supply chain, Facebook has purchased a piece of these as well. According to The Wall Street Journal: "Facebook in June started serving traffic on dark fiber cables around Europe to extend its network and connect to its new data center on the edge of the Arctic Circle in Sweden. Both Google (GOOGL 0.96%) and Facebook have invested in new Asian submarine cables in recent years."

Google expanded its own vertical integration in 2008, when it invested in the $300 million Unity undersea cable, with five other companies, that connects Japan and the U.S. Now, according to The Wall Street Journal, Google operates over 100,000 miles of global cable, which it compares to Sprint which only has 40,000 miles of cable in the U.S. Google also has contracts in place that generate 540 megawatts of wind energy.

But while Facebook and Google have pioneered tying together power generation and social networking under the same company, other web companies have yet to extend themselves beyond their digital expertise.

And there's one company that needs to
At 28% of all traffic in the U.S., the greatest single user of the Internet during peak times is Netflix (NFLX 1.70%). 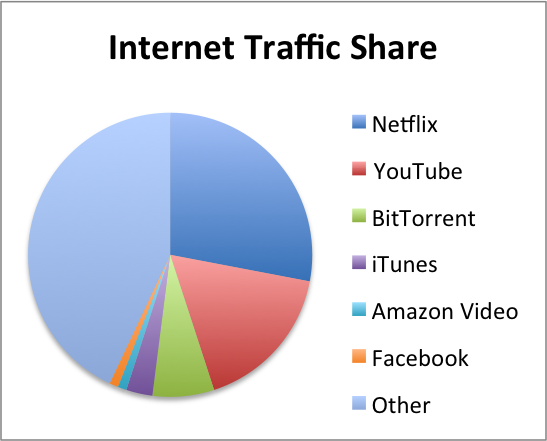 And despite its monstrous share of usage, Netflix hasn't expanded into owning its own piece of the Internet. This is one reason why the recent appeals court decision that struck down the concept of net neutrality, meaning that all Internet traffic should be handled equally no matter the content, was seen as a negative for Netflix's future. The companies that own the Internet's infrastructure could charge Netflix a fee in order to carry its traffic, and Netflix is at a strategic disadvantage in terms of negotiating power if that happens.

Netflix has had an analogous hurdle to success in its past. Its dependence on content providers was seen as a major cost that would only get worse as it had to keep re-signing contracts with studios and networks. Netflix's solution? Create its own award-winning content. Now, it's faced with the prospect of content carriers harming business. Netflix's solution? It could be to create its own distribution network.

Extending beyond a niche
While costly in terms of resources and expertise, vertically integrating helps companies survive and minimizes external threats. The web companies that integrate the most critical parts of their own supply chain can help ensure that they'll stick around longer than competitors.