General Mills and Coca-Cola have pulled back by over 8% as McDonald's has fallen by 7.4%, but dividends make all of these stocks worth considering for your portfolio.

In a market that constantly pushes toward all-time highs, it is not always easy to find fresh investment opportunities. However, three industry giants have shown weakness with falls of more than 7.25% over the last few months. Let's take a look at these companies and see if one could fill your portfolio's needs.

"Generous Mills"
General Mills (GIS -0.05%) is the company behind brands such as Betty Crocker, Pillsbury, Haagen-Dazs, Green Giant, Progresso, Yoplait, and Cheerios. The company provides its products to the U.S. and international retail segments, food-service providers, and convenience stores. Currently, its products are available in over 100 countries and it has offices and manufacturing facilities in more than 30 of them.

The stock has been declining since early August and lately it has received a few downgrades, with the most recent coming from Morgan Stanley; it downgraded General Mills to underweight from equal-weight, which means that Morgan Stanley expects the stock to perform worse than the overall industry. Since Aug. 1, the stock has declined 7.98% as the S&P 500 has risen 8.06%.

Stock performance aside, the company has been paying dividends uninterrupted and without reductions since 1898 for an incredible 116 consecutive years of payments; this is why it has been given the nickname "Generous Mills." General Mills has raised this dividend for 10 straight years, with the most recent being a 15.15% increase in July from $0.32 to $0.38 per quarter; this is a yield of around 3.13% at current levels. General Mills has raised its dividend by over 58% since fiscal 2010 and the company generates ample free cash flow so the dividend hikes can continue at a rate like this for years, if not decades. 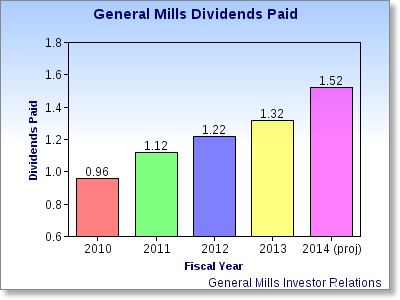 I believe an 8.6% decline in a global giant like General Mills is a buying opportunity, and the 3.13% dividend is icing on the cake. If the stock continues to fall, investors could buy more to reduce their average purchase prices and earn even higher returns when the stock rebounds. There are few safer bets out there than General Mills.

The world's beverage leader
Coca-Cola (KO 0.02%) is the global non-alcoholic beverage leader and it is home to an impressive 16 billion-dollar brands. Its most popular brands include Coca-Cola, Diet Coke, Sprite, Fanta, Dasani, Powerade, Fuze, and VitaminWater. As of today, the company offers over 3,500 products in more than 200 countries, giving it one of the largest global footprints you will find.

The decline in Coca-Cola's stock began immediately after it reached its 52-week high on May 16, 2013. Coca-Cola had missed revenue estimates in February but continued higher, only to fade in June; it then continued its decline after it reported a mixed quarter in July. The July report was especially bad because it showed that profit fell by 4% due to weaker-than-expected sales in Coca-Cola's home market, North America. From May 16 to Oct. 7, the stock fell 14.02%, but it has since rebounded and currently sits about 8.6% below its 52-week high.

Regardless of the short-term performance of its stock, Coca-Cola is home to one of the best dividends you will find in the market today. The company has paid quarterly dividends since 1920, which includes 51 consecutive years of increases. The most recent increase came in February of 2013 with a raise of 9.8% from $0.255 to $0.28 per quarter. The stock currently sports a yield of about 2.82%, but the dividend should see yet another increase with the next quarterly report in February. 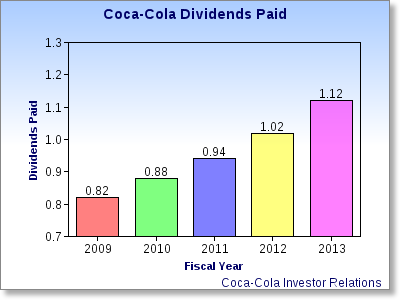 Coca-Cola has grown its dividend by roughly 36.6% since 2009 and I believe the dividend could continue to grow at this rate, regardless of the price action in the stock; this opinion is supported by the fact that so many of Coca-Cola's products fall under the category of "cash cows" and those alone could keep the company and its dividend growing for decades. The initiation of a position in this stock right now would provide a consistent and growing stream of income to any portfolio.

Golden arches, red stock
McDonald's (MCD -0.77%) is the leading global food-service retailer and one of the largest customers of the previously discussed Coca-Cola. There are over 34,000 McDonald's locations in 118 countries which serve approximately 69 million people each day. Although critics have questioned the nutritional value of its foods, McDonald's has continued to dominate the world's fast-food industry.

McDonald's has dealt with several issues since it reached its 52-week high on April 12, with the most common being weaker-than-expected comparable-store sales; here's a table showing how it has done on this metric since April, with a 7.27% decline from April 2013 to mid-January 2014:

Even considering the declines, McDonald's is still home to one of the best, growing dividends in the market today. In fact, the company has raised its dividend each and every year since it paid its first dividend in 1976; the most recent increase on Sept. 18 put the streak at 37 consecutive years of increases. Since 2009, McDonald's has raised its dividend by more than 52%, showing that it is still as dedicated to its shareholders as ever. 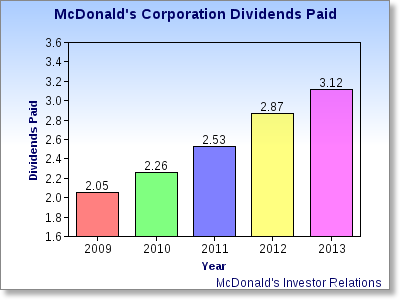 The decline in McDonald's stock may not be over, but this may be a good level to start an initial position. This stock's relatively safe from large-scale declines, because the yield will rise and cause investors to buy; also, McDonald's is fairly safe from short-selling, as sellers would then have to pay the hefty dividend. Overall, I believe McDonald's will get its act together and provide returns similar to those of the overall market for the next few years.

The Foolish bottom line
General Mills, Coca-Cola, and McDonald's have pulled back as the overall market has rallied higher. Each company sports favorable forward earnings estimates and has a high yield, which makes me optimistic about the performance of these stocks for the remainder of the year and going forward. Take a look at one of these if your portfolio could use a nice stream of dividend income paired with modest growth.