Pandora will need to improve its top line considerably this year to justify its huge valuation.

Pandora (P), a big player the Internet radio service market, is facing a difficult situation with regard to its business model. The company's stock price has been going up and recently hit a record high of $36. However, Pandora, currently valued at more than $6 billion, showed no profit in its last quarter.

To make matters worse, although its revenue growth rate is still relatively high, it has decreased considerably in the last three years. Currently, the radio service company, which has a forward price-to-earnings ratio over 100, is looking for ways to further promote its ads and improve monetization, as well as increasing the number of active listeners on mobile and automotive platforms. But, will Pandora be able to generate enough revenue this year to justify its nosebleed valuation? 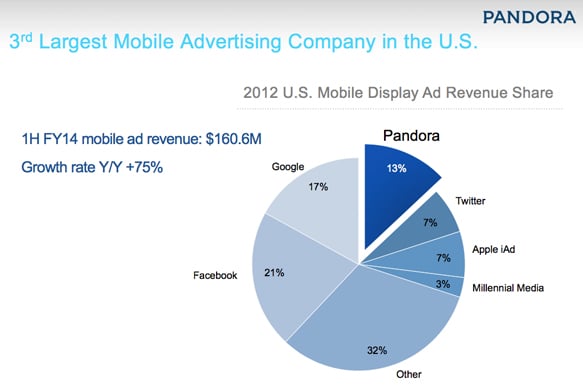 Increasing competition
Pandora is one of the most innovative companies in the music space. To recommend music, Pandora employs professional musicians that analyze each song for half an hour, then describe that music according to predefined attributes or keywords. Each song is analyzed using up to 450 distinct attributes.

Unfortunately, this process is very expensive. More importantly, other players in the Internet radio space, like Apple (AAPL -0.34%) with its iTunes Radio, Sirius XM, and Spotify offer similar services. These competitors may not provide a state-of-the-art music recommendation service, but may have larger libraries of albums, offsetting Pandora's competitive advantages. Finally, because Pandora uses a business model based on digital ads, it also has to compete with advertising giants like Google (GOOGL -0.55%) and Yahoo!.

Apple and Google want to capture market share
The reality is that, to succeed in this fierce space, an excellent music recommendation system isn't enough anymore. Pandora needs to offer a vast library of music, well-targeted ads, social features, and several other high-quality services in order to retain listeners and, eventually, become profitable. Yet, the challenge is that there are already plenty of Internet radios in the market, with great reviews and similar, if not better, features than Pandora.

One example is Apple's iTunes. In the first month after its release, more than 20 million customers listened to over 1 billion hours of music using iTunes Radio. The service is still small, but Apple possesses a vast amount of cash with which it can invest in growth.

Google, which released Play Music All Access last year, could implement a music streaming service on YouTube, which could help the company take advantage of YouTube's massive traffic to create a new giant payer in the music space. Many users already utilize YouTube as a music player because the service offers a plethora of music videos.

Lack of differentiation
In the beginning, Pandora had a clear technological competitive advantage in the industry, thanks to its complex and expensive music recommendation algorithm, which is typically very well-received by music listeners. Now, with plenty of radios offering similar services, Pandora needs to get an extra edge.

Pandora's new edge could involve providing Internet radio service in cars. The company is negotiating with car manufacturers to implement this idea. However, one concern is the likelihood that listeners may not pay enough attention to ads while driving.

Worrying signs of overvaluation
After taking market conditions and Pandora's fundamentals into consideration, the stock appears overvalued. It might take several years for the company to generate enough cash flow to justify its current market valuation.

Of course, Pandora can improve its situation by focusing on increasing paid memberships, adding differentiation to its tech system, or becoming a standard included feature in popular car models. These initiatives could serve to increase the company's top line. But, profitability remains uncertain due to issues related to royalties and the effectiveness of Pandora's ads.

Final Foolish takeaway
It may be hard for Pandora to justify its current market valuation. Moreover, Apple's efforts to expand its iTunes Radio service, and the possibility of a YouTube music streaming service in the foreseeable future, are medium-sized negatives for Pandora. Shorting Pandora's stock in the context of a bullish market sounds radical, but there may be safer investment alternatives this year.

Adrian Campos has no position in any stocks mentioned. The Motley Fool recommends Apple, Google, and Pandora Media. The Motley Fool owns shares of Apple and Google. We Fools may not all hold the same opinions, but we all believe that considering a diverse range of insights makes us better investors. The Motley Fool has a disclosure policy.