Large-scale genome editing can create entirely new organisms, but it can also create a number of growth opportunities for your portfolio. Here's how Agilent Technologies, Intrexon, and Solazyme can keep your portfolio chugging along in 2014.

Synthetic biology is relatively new, but the field holds near-limitless potential to shape every aspect of our daily lives. While it's easy to think the industry will only have a major impact in industrial applications, at companies such as Amyris and Solazyme (TVIA), there are numerous unrelated industries waiting to be forever changed by large-scale genetic tinkering. How can Agilent Technologies (A 1.49%), Intrexon (PGEN -3.11%), and Solazyme power your portfolio higher in 2014 and beyond? 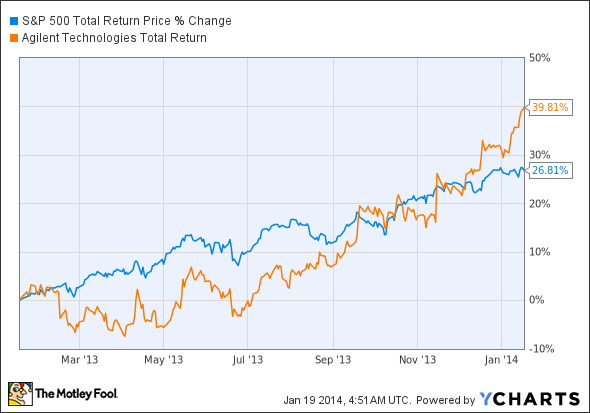 You may associate Agilent with its core business of providing bioanalytical measurement solutions, but the $20 billion company refuses to miss out on the growth opportunity presented by synthetic biology. After seeing the exploding need for synthetic genes and developing an industry-leading platform for creating short, single-stranded DNA (oligonucleotides), the company made a $21 million investment in DNA synthesis start-up Gen9 that combined each company's sequencing library in return for an equity stake and a position on the board. Prior to that in early 2011, Agilent helped to launch the UC Berkeley Synthetic Biology Institute to spur development in the field.

I think the investment spree is a brilliant idea. Agilent is positioning itself to greatly increase the number of potential customers that will need its analytical services by fueling growth of the nascent synthetic biology industry. While nothing is guaranteed, the investments could help ease investor concerns of slowing revenue growth and profits that have occurred in the last several fiscal years. I wouldn't begin to think that management is done cutting checks to tap into the market, either. 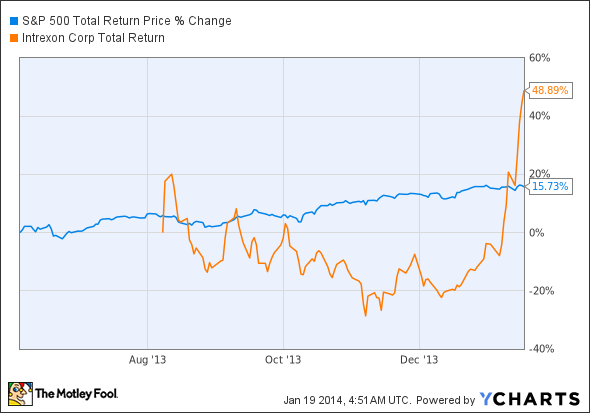 A few months ago, I voiced three of my concerns with synthetic biology leader Intrexon: The company had partnerships with mostly unproven companies; Wall Street was setting impossible expectations, and shares looked a little frothy given the long time horizon for revenue generation. Since then, collaborations with Johnson & Johnson and Sun Pharma have partially eased my worries about attracting well-funded customers, although Wall Street and a soaring valuation remain red flags. While I'll admit that my views on company valuation are in the process of evolving, I'm still scared of Wall Street's potential to screw things up.

Assuming unrealistic revenue targets don't get in the way, Intrexon is a spectacular long-term growth opportunity that could wield a diverse portfolio of multimillion- or multibillion-dollar products spanning health care, chemical manufacturing, aquaculture, agriculture, and environmental remediation within the next decade. I can't promise shares won't deflate after a 55% climb to begin 2014, but racking up more development collaborations this year and the approval of the first genetically engineered Atlantic salmon would give investors plenty to cheer about. 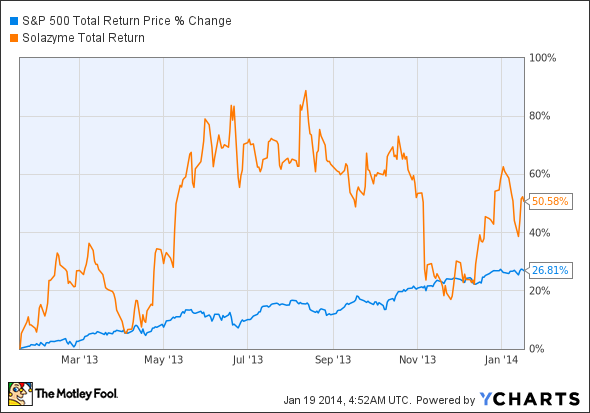 While I've tried hard to remain objective and level-headed about the tremendous growth opportunity in the making at Solazyme in the last two years, it is difficult to keep my optimism from boiling over as 2014 gets under way. The well-capitalized industrial biotech company will soon begin operations at its first two commercial scale facilities on its way to 120,000 metric tons of annual renewable oil production capacity by mid-2015. In other words, Solazyme will go from a little more than $50 million in annual revenue in 2013 to several hundred million dollars in annual revenue by 2015 and beyond.

Investors aren't out of the woods yet, especially considering the wide range of potential obstacles facing ramp-up, but there likely won't be another opportunity to buy Solazyme under $1 billion after 2014 is in the books. The company is forging ahead with its disruptive platform for creating renewable oils with identical or superior performance compared to those created by other processes and continues to attract partners in various industries. That will help distribute, but not eliminate, development risks while insulating the company's product portfolio from volatility.

Foolish bottom line
The way I see it, there is an obvious growth opportunity brewing in the synthetic biology industry for long-term investors. There will inevitably be hurdles for each company above as they pioneer new technologies with disruptive potential, but the long-term rewards far outweigh the risks of development. If you can stomach the occasional big drop -- and use it as a buying opportunity -- then you, too, can make synthetic biology an integral part of your investment portfolio and retirement plan.