Wall Street has called for some impressive growth in 2014, but the numbers may not check out.

Renewable oils manufacturer and industrial biotech darling Solazyme (TVIA) is building out its first wave of commercial scale capacity: a total of 120,000 metric tons (MT) of annual capacity on two continents. The company currently operates a 1,820 MT demonstration facility in Peoria, although production is allocated between the growing Algenist skin care line, working out kinks from lab-test oil profiles, and fulfilling customer test quantities. When you consider that some oil profiles in development can fetch more than $3,000 per MT and 2013 sales will be about $55 million, there is no denying that investors are in for a quantum leap in revenue growth. 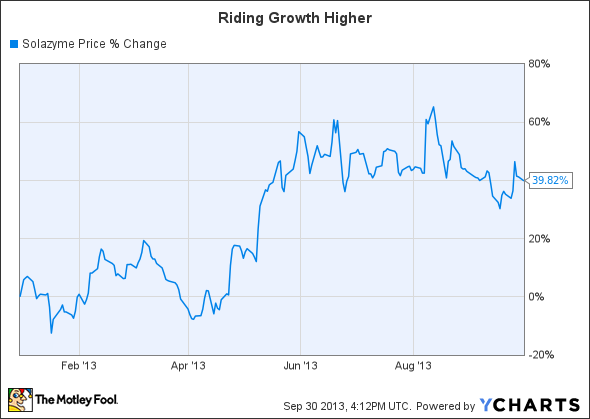 If you take a look at Wall Street expectations for 2014 revenue you'll see that the average of 10 estimates is $232 million. That's down from $282 million just a few months ago, although it still marks a massive improvement from 2013 sales. Some investors may incorporate Wall Street estimates into their investment decision making, but that isn't always a good idea.

Let's be clear: Solazyme is poised to experience incredible growth next year and beyond. However, I believe Wall Street expectations for next year's revenue set the bar impossibly high for Solazyme and may only harm shareholders. To illustrate my concerns, we will look at a simplistic production model to determine the volume of renewable oils investors can reasonably expect and back track to calculate the average selling price required to fall in line with Wall Street. Unfortunately, the company can do everything right and still fall short. The devil is in the details.

Those devilish details
The first thing to note is that Solazyme doesn't own all 120,000 MT of capacity under construction. Half of the 100,000 MT with Bunge (BG 1.22%) belongs to the company, while it owns all 20,000 MT being developed with Archer Daniels Midland (ADM 1.47%). Bunge will generate revenue on the sale of oils generated from the jointly developed facilities, while ADM will be paid by Solazyme in cash or stock for its mentoring. In the end Solazyme's share amounts to 70,000 MT of annual capacity.

The second distinction to note is that biorefineries do not begin producing at nameplate capacity the instant they open their doors, which I explained earlier this year. To recap, a facility with 10,000 MT of annual capacity that begins operations on January 1 will not produce a total of 10,000 MT by December 31. For that reason we know the Solazyme Bunge Renewable Oils facility in Moema, Brazil will not produce 100,000 MT of product in 2014.

Can analysts be right?
The revenue projections depend on when biorefineries commence operations, the initial volumes utilized, and success of the equipment. We cannot possibly know everything (nor can analysts) and Solazyme management has been careful not to promise too much too soon before getting a glimpse of commissioning and start-up. With that in mind I made several assumptions that provide a best-case scenario for Solazyme's production potential in 2014.

The biggest weakness in this model is not knowing where to begin production. I arbitrarily chose to start at half of the maximum and set ramp-up to occur linearly -- with the same production gains occurring each month until nameplate is reached. In reality, ramp-up is an ongoing and unpredictable process that progresses as equipment is fine-tuned.

That aside, this is truly a best-case scenario. The model sets start-up and saleable product dates to the earliest possible, streamlines ramp-up to just 12 months, and assumes no problems occur during commissioning, start-up, or ramp-up. We can even imagine that the company sells all 63,334 MT of product created in the 15 months above in the 2014 fiscal year to help analysts further. We'll also discount revenue estimates $60 million to account for current operations. That way we are looking solely at revenue growth from new production. Average selling prices required would breakdown as follows:

Is that a realistic goal for the company? Here's how some of the oil profiles created by the company are valued by the market:

A recent sales agreement with Unilever will help absorb 10,000 MT of early production with high valued oils for personal care products, although actual prices have not been disclosed. While I believe Solazyme could very well hit average selling prices of $2,713 per MT, I'm not sure the company can achieve the right combination of production and average selling prices to make the numbers work. Consider that for Moema to have saleable product by the end of October, commissioning (a 1-2 week event) would likely have to have been completed by now. I think analysts are a little too optimistic.

A Foolish lesson on analysts
The next time you think about relying on analyst projections consider the following. The fact that Solazyme doesn't actually own 120,000 MT of capacity must have eluded at least one analyst: the high estimate for total revenue in 2014 was $443 million before the latest revision. Even in the best-case scenario illustrated above that would work out to a staggering average selling price of $6,044 per MT -- well above what is possible. The same analyst revised their 2014 revenue estimate downward to $305 million, or (a still bubbly) $3,865 per MT in the model above. Remember that the next time you base an investing decision on Wall Street estimates.

This shouldn't be too surprising given the perpetual poor performance of analyst estimates. As my colleagues John Reeves and IIan Moscovitz pointed out, analysts are not paid to make accurate projections or set definitive price targets. Additionally, individual investors are not even the targeted audience. A total of 51.52% of analysts said retail investors were "not important" while only 13.3% said they (meaning me writing this and you reading this) were "very important".

Foolish bottom line
Solazyme could have a tremendous 2014 with $125 million, $175 million, or $200 million in total revenue -- all very possible. Unfortunately, we know all too well what happens when company guidance comes in below the expectations of analysts. I just don't see the company hitting the average Wall Street estimate of $232 million in sales next year. Think about it like this: the company could do no wrong, continue to hit milestones, absolutely smoke 2013 revenue, and still get smacked because analysts got ahead of themselves. Is that absurd or what? That being said, I am still looking to begin a position in the company this year because there is a great amount of long-term potential. Just don't be too surprised if shares get jolted when the company provides guidance for 2014.

Fool contributor Maxx Chatsko has no position in any stocks mentioned. Check out his personal portfolio, his CAPS page, or follow him on Twitter @BlacknGoldFool to keep up with his writing on biopharmaceuticals, industrial biotech, and the bioeconomy.

The Motley Fool owns shares of Solazyme. Try any of our Foolish newsletter services free for 30 days. We Fools may not all hold the same opinions, but we all believe that considering a diverse range of insights makes us better investors. The Motley Fool has a disclosure policy.