Advanced Micro Devices (NASDAQ:AMD) continued a trend of major chip-makers with disappointing earnings last night. While the graphics-and-consoles specialist boasted adjusted earnings of $0.06 per share on $1.59 billion in revenue -- a penny better and $50 million higher than estimates, respectively -- Wall Street freaked out over the company's soft guidance heading into the first quarter of 2014, sending shares plunging 10% lower this morning.

But was AMD's report really as abysmal as the market reaction made it seem? Perhaps not. While the company's annual results showed a 2% year-over-year decline in revenue against 2012, a significant margin improvement and major cost-cutting helped AMD's bottom line rise almost back to even, a far better sight than the ugly $1.18 billion annual loss posted in 2012. Some more heartening news:

Also pertinent is the fact that, despite AMD's disappointing guidance, all of its key financial metrics are showing steady improvement from a disastrous 2012, both in quarterly terms: 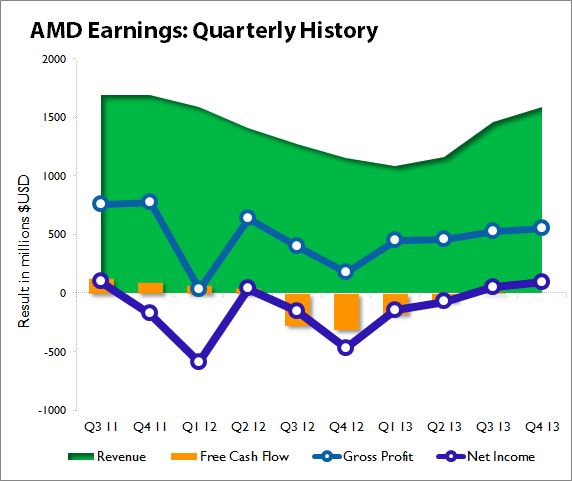 And in trailing 12-month terms, which now shows a year of definite progress: 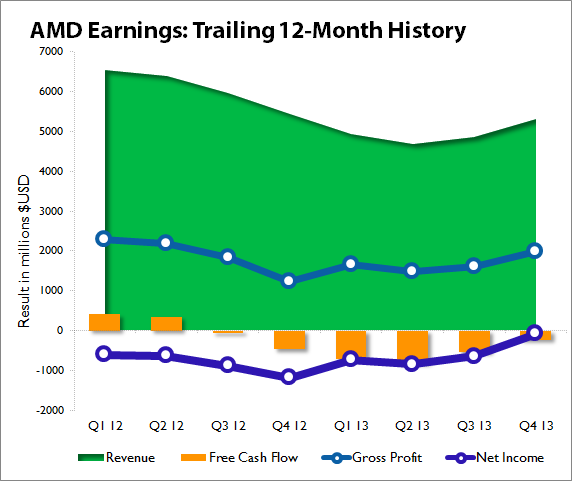 Of course, the market ultimately cares only about what a company can do tomorrow, not what it did yesterday. On this count, guidance clearly spooked jittery investors who have already been worried that AMD might not be able to maintain its progress in the face of softening PC demand. The company now projects a sequential decline of 16% on the top line (plus or minus 3%), which would peg first-quarter revenue at roughly $1.34 billion. That is slightly lower than the $1.36 billion analysts expected, but it still represents a 23% improvement over the same period in 2013, and on a trailing 12-month basis it would push AMD's revenue 13% higher over 2013's first quarter.

That's rather solid progress for a company that's long dawdled in distant second place in the PC-processor race. When gross margin and operating-expense guidance are taken into consideration, the picture actually looks rather clearer: AMD's adjusted bottom line should be approximately $44 million in the first quarter of 2014, far better than 2013's result and equal to roughly $0.06 in adjusted EPS. (AMD executives offered more conservative guidance of "breakeven or better" on their earnings conference call last night.) Since Wall Street's consensus called for a per-share loss of $0.01, today's drop seems rather inexplicable.

AMD's big problem, which remains despite its turnaround, is high levels of debt: The company only paid down $39 million of the roughly $2 billion in long-term debt on its books over the past year, but interest payments totaled $177 million for the year, an amount more than twice as high as its latest quarterly earnings. The company can whittle this weight down to size, but it'll take a lot of financial discipline and a lot more growth on both top and bottom lines to sustainably pay it down. Despite this problem, AMD is a much stronger company (and remains a better stock) today than it was a year ago, and investors probably shouldn't head for the exits just yet.