Consumer Intelligence Research Partners released analysis from its research on Apple (NASDAQ:AAPL) for the last calendar quarter of 2013. The analysis features the first findings about consumer trends for U.S. sales of the new iPad Air and Retina iPad Mini models, which launched in November 2013.

Sales of iPads were strong, led by the new Air model, which accounted for 41% of total sales. While this is slightly below the percentage of the new full-size iPad from last year -- 43% for the Retina iPad -- two things should be noted.

Not quite apples to apples
First, last holiday season, the Retina iPad had only two other models with which to compete. The iPad Air has three. So, the Air has fared very well against other Apple tablets.

Second, the percentage is likely measured against a larger overall sales number. The previous December quarter, Apple sold about 22 million iPads in total. In 2013, the company most likely sold more, although we won't know for sure until numbers are released on Jan. 27.

By averaging the sales estimates of Horace Dediu and Daniel Tello -- both respected independent analysts -- there were an estimated 26 million units for the quarter. If that number holds up, CIRP's figure would give us 10.66 million Airs, versus last year's 9.46 million units.

It looks like the year-old iPad Mini stole the show in the smaller-sized models, but keep in mind that the newer Retina iPad Mini did not launch until Nov. 12, and supplies were limited at the time.

The newer Mini has an increased base price of $399, in contrast to $329 for the original Mini introduction. This should help Apple's average selling prices and gross margins, which have dropped since highs of two years ago. Dediu and Tello have estimated gross margins for this quarter at 37.1% and 37.8%, respectively, up slightly from last quarter's 37%. 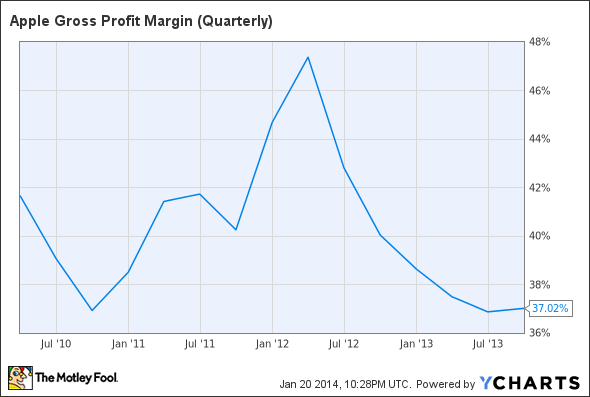 Other iPad data
Fiksu tracks usage of unique devices running apps that use its analytics system. With millions of records, it has a huge database. It provides charts to show relative usage over time. While there is no assurance that this gives a complete view of systems sold, we can assume it to be a fairly accurate sampling, and if there is indeed some bias, most likely this bias is consistent over time.

Next, let's turn to a chart of the growth of the new iPad Air and Mini 2 devices since Nov. 1 of last year. The percentage figures indicate the percentage of total iPad systems registered on a given day. As such, it indicates relative growth of new systems, but without giving any real numbers.

We can see below that the Air and Mini 2 are growing, currently at 7.7% and 2.3%, respectively. Remember, the difference between this and the CIRP data is that this is the percentage of all existing iPad tablets registered on a given day, while the latter is the percentage of new sales.

Competition
Most competitor's tablets run the Android operating system by Google (NASDAQ:GOOGL). Google has its own Nexus tablets made by ASUS, but the most popular Android tablets are the Note series by Samsung (NASDAQOTH: SSNLF).

Mixpanel is another analytics company that embeds its report engine in apps and web pages. It provides data on its site, and the results are listed here for the Note and Nexus tablets. Since there are no other tablets with sufficient enough market share to be included -- Mixpanel does not include readers such as the Kindle or Nook -- the rest are all iPads of various versions.

The totals clearly indicate that the share of these alternative tablets took a huge hit, not only in the holiday quarter, but continuing into the new year.

Conclusion
It seems as though the new iPads have had a very good holiday season, and will likely reach the 26 million sales figure. If the mix is heavily in the new and upper-end products, this will contribute to good margins for Apple's coming earnings announcement.

Again, Mixpanel gives only a limited view of the tablet world, but if its data proves accurate, then Apple continues to dominate the tablet market and is actually growing share.

All of this looks very positive for Apple.