Just how attractive does Google, Inc. look at its current levels?

It's genuinely hard to overstate just how impressive Google's (GOOGL -2.75%) recent performance has been.

And I'm not only talking about Google's share price here, although that's also been the stuff of envy. 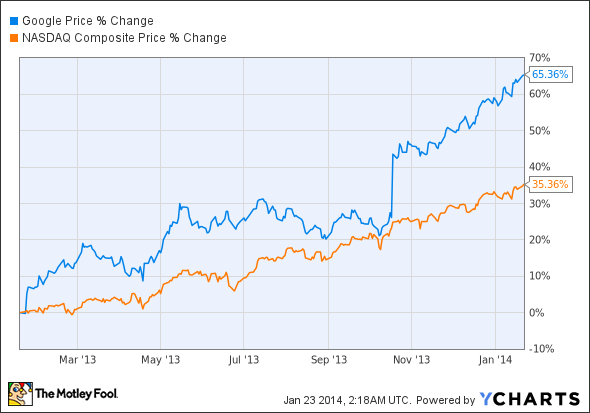 No, more broadly, you'd be hard-pressed to find a company in tech, or any other industry for that matter, that has done more to cement its grip on its industry as Google.

Leading the charge
Google certainly didn't invent the modern mobile movement. That crown would have to go to Apple, BlackBerry, or Palm (I say Apple).

However, because of its shrewd strategy with its Android mobile operating system, Google has ensured that it will remain at the epicenter of technology throughout our increasingly mobile futures. Android controlled more than 80% of the global smartphone market as of Q3 2013, and it certainly seems plausible that the same dynamic could unfold in the tablet space as well.

So given all its current success, just how attractive does Google appear at its current levels?

In the video below, tech and telecom analyst tackles this question in the latest installment of our popular "Ask a Fool" series.