Please ensure Javascript is enabled for purposes of website accessibility
Log In Help Join The Motley Fool
Free Article Join Over 1 Million Premium Members And Get More In-Depth Stock Guidance and Research
By Matthew Frankel, CFP® - Jan 23, 2014 at 7:32AM

With excellent growth and a historically low valuation, it is still a good time to get into Morgan Stanley.

Morgan Stanley (MS 0.27%) was plagued with legal expenses that caused profits to drop during its most recent quarter, but the rest of Morgan Stanley's business performed extremely well. As a result, shares popped by almost 5% to a new 52-week high on the day of its earnings announcement. Despite the pop, the shares are still a bargain. Here's why.

The fourth quarter
Without factoring in the legal expenses recorded during the quarter, which were (hopefully) one-time costs, the company made $0.50 per share, beating analyst estimates of $0.45.

Morgan Stanley's business divisions performed very well, with overall revenue from continuing operations up by 12.5% year over year. Revenue from wealth management, a key area of focus under leader James Gorman, rose more than 12% and produced a 20% profit margin, the highest in years.

One negative statistic was that fixed-income trading revenue (which is only about one-fifth the size of the wealth management division's revenue) fell by more than 14% as the bond market slowed down in the second half of 2013. This wasn't a Morgan Stanley-only thing, though -- Goldman Sachs saw similar declines.

Trends
Investment banking has been producing excellent returns for much of the banking industry. For instance, Wells Fargo (WFC -0.18%), who didn't even really have an investment banking business until it acquired Wachovia, now has one of the top market shares. In fact, Wells Fargo is now the 8th largest investment bank in the country, in addition to its market-leading position in mortgages and all of its other activities.

Bank of America (BAC -0.56%) has also grown its investment banking revenues substantially over the past couple of years, and it predicts the trend will continue for the entire sector. The company recently said it expects M&A activity to pick up significantly in the near future, which should fuel the growth in investment.

While these two banks try and bolster their investment banking arms, Morgan Stanley is already a world-class leader and set to benefit from any pick-up in merger and acquistion activity.

It's on sale!
Despite the excellent performance of the company's stock over the past year, Morgan Stanley is still pretty cheap. The consensus of analysts that follow the company predicts earnings growth of 19.4% this year, then another 19.1% in 2015, and 21.1% in 2016. This is like a high-growth tech company!

On a historical basis, Morgan Stanley is very attractively valued as well, but it's rapidly coming back to a more normal valuation. Shares currently trade for about 1.2 times the company's tangible book value of $27 per share, which has improved tremendously from the multiples of around 0.5 times TBV that we've seen over the past several years, but well below the pre-crisis valuation of the company. 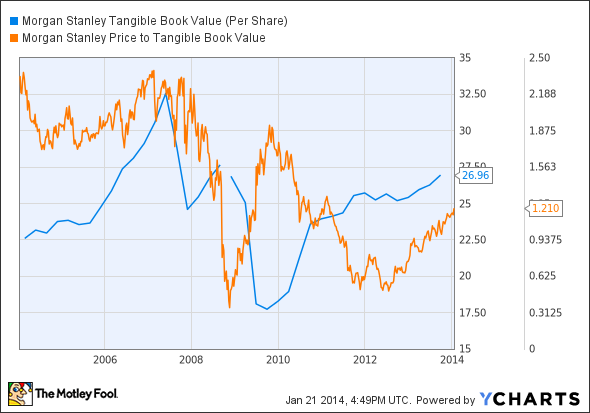 Before the financial crisis hit, Morgan Stanley's valuation held pretty steady in a range between 1.8 and 2.2 times tangible book, and it could gravitate back toward the lower end of that range as the financial sector continues to strengthen. This would produce a target share price of around $48.60 per share, or almost 50% more than the current price.

Foolish final thoughts
Morgan Stanley's low valuation is by no means unique in the financial sector right now. In fact, there are excellent deals to be had all over the place. This is just one example of a very solid company that has tremendous room to grow over the next few years.

For those who are wondering where to put their money in 2014, the financial sector, and the big banks especially, are looking like an excellent bargain, but it is a bargain that won't be around forever.