The annual JPMorgan Healthcare Conference presents a big stage for companies from around the pharmaceutical industry to announce new partnerships, present new data, and update investors on internal goals. But while the attendees -- scientists, doctors, journalists, executives, and curious individuals -- are accustomed to learning of world firsts, nothing could have prepared them for the announcement from Illumina (NASDAQ:ILMN) that the cost of sequencing a full human genome would soon drop to the $1,000 mark and below. A gasp, followed by silence, swept across the conference hall, according to numerous attendees.

Why the surprise? The previous cost for sequencing a human genome was sitting in the $3,000-$5,000 range, so no one could have predicted that the $1,000 genome would be the next stop in development. Illumina may have secured its place in history -- assuming the numbers work out -- but the $1,000 human genome won't be the last breakthrough in sequencing. Let's breakdown the numbers and explore how Illumina and Thermo Fisher Scientific (NYSE:TMO) are racing to create DNA sequencing innovations.

How do you sequence a human genome for $1,000?
While many headlines seized the opportunity of Illumina's announcement, it's worth noting several of the strings attached. The sequencing system enabling prices of $1,000 -- and eventually below -- is the HiSeq X Ten, which is comprised of 10 HiSeq X machines that sell for $1 million each. A quick calculation shows it is unlikely these systems will be making an appearance at your local hospital or university labs, but the breakthrough is no less thrilling. 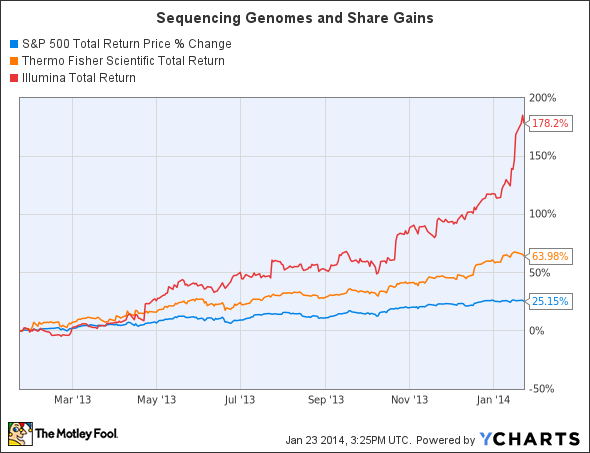 The most important factor contributing to the $1,000 human genome is the greatly increased data processing speed of the HiSeq X, which is capable of sequencing up to 16 human genomes every three days, or about 1,800 every year. However, to ensure quality readouts and reduce error rates, each human genome is read 30 times. That means each individual sequencer can read all 3.24 billion base pairs of the human genome nearly 160 times each day!

That's impressive, but there are other factors inflating the cost of sequencing. Illumina CEO Jay Flatley noted that the $1,000 figure was arrived at by estimated reagent (enzymes and solvents) costs of $797 per genome, depreciation costs of each machine of $137 per genome, and technician salary costs of $65 per genome. We'll see if the numbers stack up in the real world.

Is genome sequencing really more accessible?
Descending sequencing costs commonly reported in graphs with logarithmic scales usually use a full human genome as the benchmark, but it isn't the most widely sequenced span of DNA. I think it's fair to say Illumina won't be selling HiSeq X Ten systems by the dozens by any means. So is genome sequencing really becoming more accessible to consumers? Well, yes, because innovations pushing the envelope at the high end of the market do in fact trickle down to larger segments.

Consider that Illumina's cheaper $250,000 NextSeq 500 desktop sequencer, also revealed at the JPMorgan Healthcare Conference, is well within reach of local institutions. It will compete with the Ion Torrent desktop sequencer from Life Technologies, soon to be a part of Thermo Fisher Scientific, that is already on the market. Both are valuable tools in analyzing gene groups associated with various diseases.

How do you sequence a human genome for less than $1,000?
Both Illumina and Thermo Fisher Scientific will be working to improve the data processing speeds of their respective sequencers, but as alluded to above, separate innovations will be required to lower the cost of reagents. Of course, reagent costs have declined alongside sequencing costs over the years, but we're still far away from a $100 human genome. While the HiSeq X Ten system will struggle to yield $1,000 sequencing costs for human genomes initially, it will easily be the first to reach the barrier over time.

Editor's Note: A previous version of this article incorrectly stated that the system made by Illumina is unable to sequence whole genomes. The Fool regrets the error.