It is now estimated that last month's massive Target (NYSE:TGT) data breach may have affected more than 100 million customers, with stolen information dating back a decade. Over the next few weeks or months, new facts will emerge as to what exactly happened and why.

However, this data breach might not be Target's biggest problem long term. Target also has to address the growing competition from industry peers Wal-Mart Stores (NYSE:WMT) and Costco Wholesale (NASDAQ:COST), the effects of online retailers like Amazon.com (NASDAQ:AMZN), and the changing retail environment altogether.

Target has been below EPS estimates in two of the last three quarters and has not met or beat revenue expectations since the fourth quarter of 2012.

The company blames its 2013 struggles on its new Canadian segment. The 124 planned store openings, which began in March 2013, have not gone as smoothly as Target had planned. Excess inventory due to disappointing sales is forcing Target to reduce prices, which consequently negatively affects gross margins.

With more news being uncovered on how widespread the data breach is, Target has now cut its 2013 fourth-quarter outlook by $0.30 and expects comp sales for the quarter to be negative. 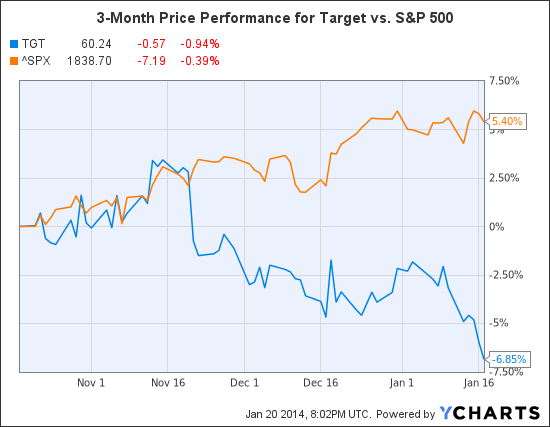 Target currently has 1,919 locations, with 122 of the planned 124 in Canada already built. However, this pales in comparison to Wal-Mart's 11,137 company stores across 27 countries including the Supercenter and Sam's Club concepts.

What makes matters worse for Target is that Wal-Mart is now invading areas that have been Target strongholds for years. This past December, the first Wal-Mart store opened in Washington, D.C. Target had little to no competition when it opened its Columbia Heights store in Washington, D.C. in 2008.

Costco's December sales results showed that the membership warehouse continues to gain traction in retail. Net sales increased 6% to $11.5 billion across the company's 648 warehouses, which include more than 200 outside the U.S.

Costco's membership renewal rate is what is really leaving a long-term dent in Target's business model. Costco is currently seeing the highest renewal rates in company history at 90% in the U.S. and Canada, despite the November 2011 membership-fee increases.

Furthermore, the expansion of its ancillary businesses, which include gas stations, pharmacies, car washes, and even travel services, is expected to bring in more members. As a result, the company is giving customers more reasons to go to a Costco and less to visit a Target.

However, more alarming is the growing membership of Amazon Prime -- the $79/year membership program that offers free two-day shipping among other perks for Amazon.com customers. The company stated that it added more than 1 million new subscribers in the third week of December alone. It is estimated that 20 million-25 million U.S. and 15 million international households hold at least one Prime account.

Both of these trends are critical to Target's long-term business model. The Placed study shows that even with price-matching Amazon.com prices, Target is still a victim of showrooming. As more people join Amazon Prime, this means there are more customers with an incentive to stay home and order from Amazon.com than shop at a Target.

The retail promotional environment and improving economy
The promotional environment in retail may also hurt Target in the next several quarters. The domino effect that has been created by retailers attempting to sell off excess inventory at greatly reduced prices may reduce traffic further at Target stores. In particular, customers shopping for apparel may find better deals at their favorite brand-name stores.

As the economy improves, increases in discretionary income may hurt Target further. With extra money to spend, customers may choose to visit the shopping mall or their favorite retailer online instead of Target to buy the things they have been waiting to buy as the economy improves.

Bottom line
The Target REDcard, which gives 5% discounts for all purchases, is a major driver of store traffic. In fact, nearly 20% of all sales are paid for by a REDcard. The entire data breach outcome, which includes the uncertainty of liabilities, reimbursements, and civil-litigation costs, only adds to existing company concerns. It is likely that the data-breach storm will dissipate given enough time. However, growing competition and the changing retail landscape may be Target's bigger problems.