And if we do, who's going to do all the fighting?

So reported USA Today last week. But not everyone is happy with the news. U.S. Army Chief of Staff Gen. Raymond Odierno defends the Army's current active duty strength of 528,000 soldiers and warns that shrinking the force to even 450,000 -- let alone 420,000 -- would put the country at "high risk" of being unable to fight and win a "major war."

As Gen. Odierno tells it, reductions in defense spending, and a 100,000-plus reduction in troop strength, could force him to eliminate half of the Army's Brigade Combat Teams. Even before that happens, 85% of BCTs could suffer reduced effectiveness from cuts to funding for training.

Nor is the Army alone in suffering layoffs. While President Obama's "pivot to the Pacific" is helping to spare the U.S. Air Force and Navy the worst of the downsizing, at the U.S. Marine Corps, Commandant Gen. Jim Amos has criticized Congressional plans to whittle down the USMC to as few as 174,000 Marines. Warns Gen. Amos, such reductions will eliminate 11 combat arms battalions, and render troop strength only "minimally acceptable."

But is the situation really as bad as all that?

Lose the tail, keep the teeth
Some experts think they see a way to reduce the manpower and cut expense, while retaining most of the Army's warfighting capability -- or even enhancing it. Asked to opine on ways to reduce defense spending without sacrificing readiness, the non-partisan Stimson Center think tank in Washington, D.C., pointed out that right now, only about 16% of soldiers in the military actually "fight" our wars. The rest of the 1.4 million servicemen and -women serve primarily in supporting roles -- transporting supplies, maintaining vehicles, evaluating intelligence, and so on.

Now, supply, maintenance, and intel are all important functions. You can't fight a war without bullets, can't shoot a rifle that's broken, or know where to point it without good intel. But Stimson may still have a point: While these tasks may be essential, it's not essential that humans perform them.

I, Robot, PFC
Lately, the U.S. Army has begun mulling the possibility of replacing many functions, currently performed by flesh-and-blood soldiers, with robots. U.S. Army Training and Doctrine Command head Gen. Robert Cone has even suggested that one in four American soldiers could eventually be replaced with a robot.

After all, according to the Pentagon, it costs about $815,000 a year to train and equip a U.S. infantryman, transport him to the field, and keep him supplied there for a year. It's not hard to imagine ways that robots could cut down on that cost. For example, an iRobot (IRBT 0.35%) PackBot bomb disposal robot costs just $150,000 -- and is a bargain if it saves just one soldier from being blown up by an IED.

iRobot's other reconnaissance robots, including the SUGV and FirstLook, cost even less, are smaller than the PackBot, and can travel (or in the tiny FirstLook's case, be tossed) into places too small, or too dangerous, for a soldier to go. 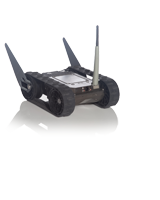 And then there are the multiple unmanned aerial vehicles manufactured by AeroVironment (AVAV 1.87%), at costs measured in only the tens of thousands, that put aerial reconnaissance in the hands of platoon leaders -- a real force multiplier.

Down the road, the Army could begin putting iRobot's larger Warrior robot, or even Google's (GOOGL 0.33%) BigDog -- capable of carrying loads of up to 340 pounds, and traveling up hills, over snow, and through water at speeds up to 4 mph -- to work carrying supplies for the Army.

As Gen. Cone promises, in the not-too=distant future, we could see robots turn the Army into "a smaller, more lethal, deployable and agile force" -- and save the taxpayers some money in the process.

Fool contributor Rich Smith has no position in any stocks mentioned. The Motley Fool recommends AeroVironment, Google, and iRobot and owns shares of Google. Try any of our Foolish newsletter services free for 30 days. We Fools don't all hold the same opinions, but we all believe that considering a diverse range of insights makes us better investors. The Motley Fool has a disclosure policy.