Chowing down throughout the big game is an American tradition, if not an obligation, that maybe adds on a few pounds for us but adds more profits to these companies' coffers. No matter which football team you bet on, these food companies will be winners.

Dip, pizza, chips, wings, and soda are mainstays of any Super Bowl party. During the biggest sporting event of the year, 27 billion calories worth of potato chips, 8.2 million pounds of tortilla chips, and 41 million bowls of guacamole are expected to be served.

Americans are expected to spend an estimated $50 million-plus to fuel game day gluttony. While spectators chow down on Super Bowl Sunday, revenues for these three companies will be fattening up.

Calavo Growers, a small-cap avocado, papaya, and tomato distributor, is on a huge growth trajectory thanks to the ever-growing popularity of salsa and avocados. It is trading near 52-week highs, up 35% over the past year.

Calavo markets for 1,600 growers in California and has alliances or joint ventures with growers in Chile, Mexico, and New Zealand. The company doesn't elicit much coverage, either in the press or by analysts. That's a shame because it is outperforming better known competitor Fresh Del Monte Produce.

The amazing growth of avocados' popularity has allowed Calavo to increase its dividend by 225% since 2002. The yield is now 2.20%.

PepsiCo (PEP -0.14%): What's a party without dips, chips, and soda?
Speaking of guacamole, how can you possibly watch football without chips to scoop it up with?

Tostitos, Doritos, Fritos, and the sofa-staining Cheetos are mainstay game day fare. And don't forget the twelve-packs of Pepsi or Mountain Dew.

These are just some of the 22 flagship brands each earning $1 billion annually for PepsiCo. (Fun fact: Those coolers of Gatorade poured over the victorious coach... also a brand owned by PepsiCo.) Do your guests have more sophisticated tastes? How about some hummus instead? PepsiCo owns Sabra hummus, too.

In fact, half of PepsiCo revenues come from food, not beverages.  That diversification is what makes PepsiCo a more alluring investment than rival Coca-Cola, which is more exposed to the declining trend in soda consumption as carbonated soft drinks are being supplanted by teas, waters, juices, and energy drinks.

Moaning on the sofa the day after the Big Game, shareholders can at least be comforted that PepsiCo will be fattening their wallet not only with share price appreciation (14.7% over the past year) but also dividends and buybacks. PepsiCo has returned more than $53 billion in the last decade with buybacks and dividends. PepsiCo has also increased that dividend for 41 consecutive years. It now yields 2.70%. 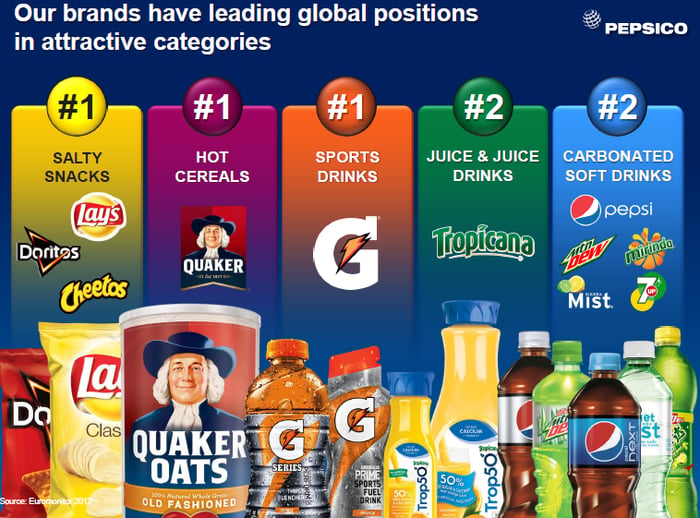 Domino's Pizza (DPZ -1.57%): Pizza and wings a mainstay for Game Day
While players on the field will experience intense pressure on game day, so too will Domino's Pizza.

Super Bowl Sunday is the most important day of the year for mid-cap Domino's. The company expects to sell 11 million pizzas slices and 3 million wings, adding up to 80% more  sales than an average Sunday. Deliveries will tote up an estimated 4 million miles for Domino's.

This year, the company says it "expects to see a 30 percent increase in digital orders over a typical Sunday." Domino's owns a third of digital pizza sales, adding up to $3 billion annually. Digital is critical to Domino's and its ordering apps are represented on 95% of smartphones. You can even order Domino's over your Ford Sync AppLink on your way to the party.

Domino's stock has surged since the company reinvented its recipe from scratch in 2010, replacing 85% of its menu with new products. The move has been a win for investors and pizza lovers: The stock is up 57% over the last year alone. Plus, Domino's smoked rival Pizza Hut (owned by Yum! Brands,) in a Huffington Post pizza deathmatch, scoring 72% of votes in that match last fall.

Fun, food, and football
Come game day, take a look at your Super Bowl Sunday spread. Is your snack table dominated by products from these three companies? Perhaps you should clear a place for them in your portfolio, too. That way if your team doesn't win the big game, at least the consolation prize comes with some upside potential.

Is the Worst Finally Over for Disney Stock?
356%