Biotech dominates in January as Intercept, Cell Therapeutics, and Neurocrine all surge after good drug-trial news.

One of the best things about being a long-term investor is that the law of gravity need not apply to good stocks -- what goes up doesn't necessarily have to come down. But some stocks can still fly too close to the sun, singing investors who bought in at too dear a price. When we're talking about momentum stocks, one investor's long-term winner could be another's warning sign, so it's important to separate the hype from the truth to find out just why a stock is soaring today, and whether it can keep rising tomorrow.

Intercept Pharmaceuticals
Few public companies in any industry -- even in the incredibly volatile biotech space -- have ever enjoyed the rocket ride Intercept went on earlier this month -- in just one day, shares gained more than 300% after Intercept publicized a positive recommendation for its obeticholic acid, or OCA, treatment for nonalcoholic steatohepatitis, or NASH. The treatment showed statistically significant improvements in the condition of many patients in Intercept's phase 2b trial. Considering the sheer size of the affected population -- up to 12% of Americans have NASH -- many investors felt this report marked the beginning of a major blockbuster drug, one that has no visible competition. The megapop continued for a second day and Intercept's shares topped out at a two-day gain of more than 500%. 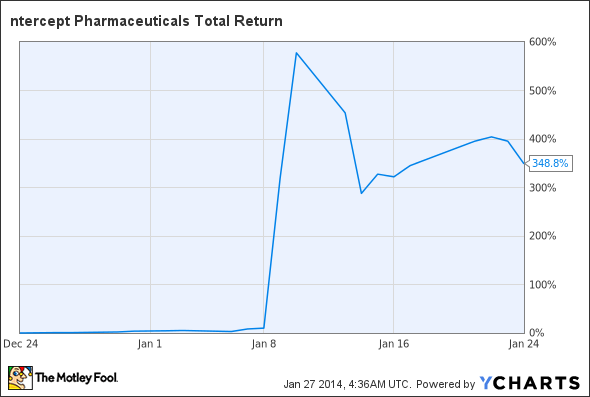 Since topping out at about $445, Intercept's shares sank back to a slightly more reasonable price of about $300 (as of this writing), and the 500% gain became a 350% gain. Still, investors who have held on since Intercept's late-2012 IPO have nothing to complain about, as they have a 15-bagger on their hands after little more than one year of trading.

However, Intercept is still small enough and tightly focused enough that its share-price moves in the near future will likely be driven entirely by rumors, press releases, and short-selling raids. That adds up to extreme volatility, and months or years can be expected to pass before the Food and Drug Administration clears OCA -- if it is cleared at all. Iron-willed investors may be able to clamp down and hold on for the ride, but those with a weaker understanding of biotech investing, or a weaker constitution when it comes to volatility, are probably better off on the sidelines.

Cell Theraputics
Unlike its larger biotech peer at the top of this week's list, Cell Therapeutics hasn't been propelled by one single massive pop. As is often the case, the company has been rising throughout January as a result of several pieces of good news. Cell Therapeutics' Pixuvri, a treatment for non-Hodgkin lymphoma, was approved by Britain's National Institute for Health and Care Excellence as a cost-effective treatment option. On the other side of the pond, Cell Therapeutics' leukemia drug Tosedostat was released from a partial FDA clinical hold.

Later in the month, Cell Therapeutics provided guidance for the rest of 2014 that indicated further progress on trials for pacritinib and Opaxio, which gave shares another double-digit boost. The company also managed to regain the full rights to both Pixuvri and Opaxio from former partner Novartis (NVS 0.43%). All told, the positive momentum propelled Cell Therapeutics to a double for the month of January: 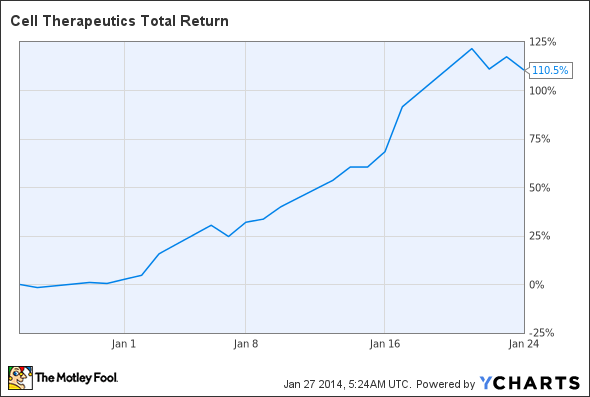 However, Fool contributor and biotech specialist Sean Williams pointed out that this recent good news is simply one bump on a steady downward slide that has shredded virtually all shareholder value over the past decade. Indeed, when examined on a 10-year timeline, we find that Cell Therapeutics' recent pop is completely invisible to the naked eye: 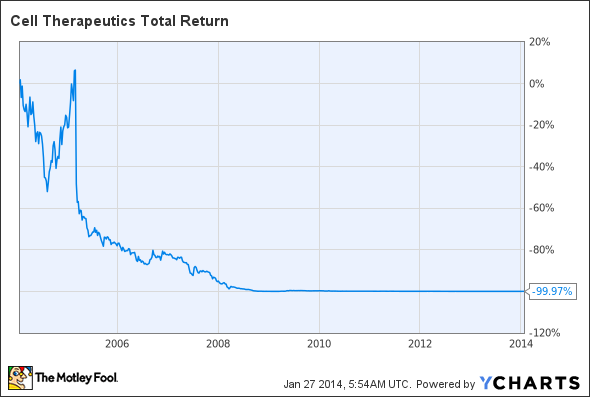 It's only when we zoom in to the past year that Cell Therapeutics again looks like a good investment. Williams, though, also notes that the company didn't actually wrest back the rights to two of its biggest drugs -- Novartis simply didn't want to license the drugs in the first place. The company has only one drug approved, and even then only in Europe. On the other hand, analysts at Roth Capital recently pegged their price target for Cell Therapeutics shares at $7, up from $6, and at current share prices this represents a hefty 75% upside. History isn't on Cell Therapeutics' side, so it may be better to sit on the sidelines here.

Neurocrine Biosciences
The biotech clean sweep is complete for the month of January with Neurocrine Biosciences, another developmental-stage company with one huge day propelling it higher. Neurocrine has taken investors on quite the violent ride over the last few months, and all over the same drug -- its tardive dyskinesia drug NBI-98854 produced disappointing results last September, but after reworking the study Neurocrine managed to produce some success. Investors then flocked to the stock, which nearly doubled in a single day: 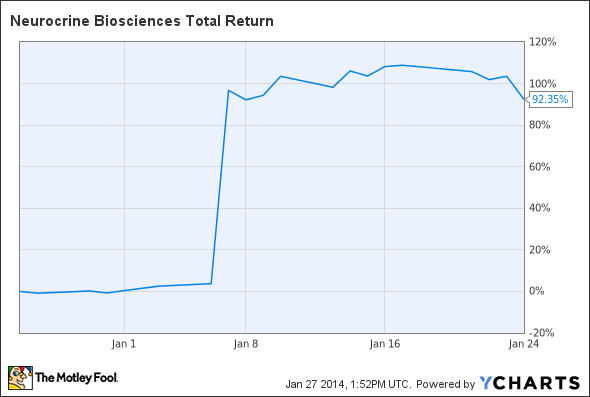 Neurocrine's megapop has proven to be more sustainable than top performer Intercept's leap, as it remains roughly in line with its post-pop closing price several weeks later. However, while both Neurocrine and Intercept have developed promising new drugs with no apparent competition, investor enthusiasm over Intercept's positive progress was so extreme that it makes Neurocrine look like a bargain by comparison. It might be a long way from FDA approval, but Sean Williams thinks that NBI-98854 has a better chance of surprising investors to the upside with its long-term sales figures. This month's megapops are not for the faint of heart, but if you still want to rush in after the big gain, Neurocrine might be your best bet.