T.J. Rodgers, the founder and CEO of Cypress Semiconductor (NASDAQ:CY), gave a serious pep talk to his team and investors during the company's latest earnings call. He's convinced his company can overcome competitors like Synaptics (NASDAQ:SYNA) as well as low-end players in China.

Rodgers believes his company is at a turning point, where Cypress' programmable-systems division, which makes things like touchscreens for Samsung (NASDAQOTH: SSNLF) among other OEMs, will start growing faster than business in static random-access memory, or SRAM, declines.

On getting to $1 billion in annual revenue
When Ruben Roy from Mizuho Securities USA asked Rodgers about returning to a $1 billion annual run rate after nine straight quarters of year-over-year revenue declines, the CEO initially had trouble gathering himself. But when he did, he let loose with a great pep talk.

The new reality is we've been flat for a decade, it's freely admitted to and documented and quantified in the annual report. We have an excellent company with superior technology capability and we're planning on growing. 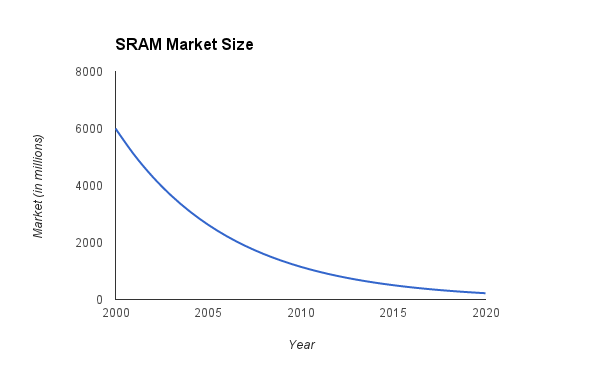 The memory-products division was the only one of the company's three main divisions that saw an increase in revenue during 2013. Its programmable systems division declined 15%, and data communications division declined 8%, as Synaptics earned more of the touchscreen business and USB 3.0 adoption was slow.

In the last quarter, Synaptics increased its mobile revenue 64% over the prior-year period, taking advantage of Cypress' lagging Gen4 PSoC products. Cypress didn't miss the boat with its newest-generation technology and is achieving numerous design wins with customers like Samsung, which uses Cypress' technology for its touch buttons on its smartphones as well as some touchscreens. Samsung's orders usually comprise greater than 10% of Cypress' revenue.

Samsung is also Synaptics' biggest customer, and the two will go head-to-head to win designs as the Korean device maker pushes out a plethora of new tablets and refreshes its abundant smartphone lines.

On winning the low end and wearables
Rodgers is well aware of competition coming from Chinese engineering firms. They can make things cheap, but Rodgers believes Cypress can compete on technology and cost at the same time.

He relayed a story of how a Chinese company was producing a competing chip for $0.22 targeted toward the low-end wearable market, and one of his business unit managers proposed a competing chip he called "Street Fighter." The reason:

Cypress is now capable of producing a better chip at a better price, and it points to Cypress' capabilities as an engineering firm. Its focus on creating better technology is what can keep it ahead of its competition. It leads the market in low-energy touch and Bluetooth chips, which are key for wearables, since the batteries are smaller.

In fact, Cypress announced two design wins for smart watches this month for Sony and Qualcomm. If wearable devices grow quickly, Cypress could grab a huge portion of the market. But while Cypress currently is able to receive a premium for its wearable touchscreen chips, its ASP is bound to come down to "Street Fighter" levels as competition improves.

Putting the "edge" in "leading edge"
Rodgers was certainly on fire during the conference call, but he really drove the point home that Cypress has a history as a semiconductor company that creates "really good chips." The company has faced secular pressure in the SRAM market for more than a decade, and it had a product gap between 2011 and 2013 in its important touchscreen business. Now the company looks poised to return to revenue growth as it takes on competition domestically and abroad.