Southwest Airlines Co. doubled its EPS in 2013. Is there any upside left?

For much of the last decade, Southwest Airlines Co. (LUV 0.43%) was the terror of the airline industry. Southwest's superior cost structure, dedication to customer service, and commitment to low fares allowed it to rapidly gain market share in the U.S. From the beginning of 2001 to the end of 2010, Southwest more than doubled annual revenue to $12 billion, despite the impact of two recessions! 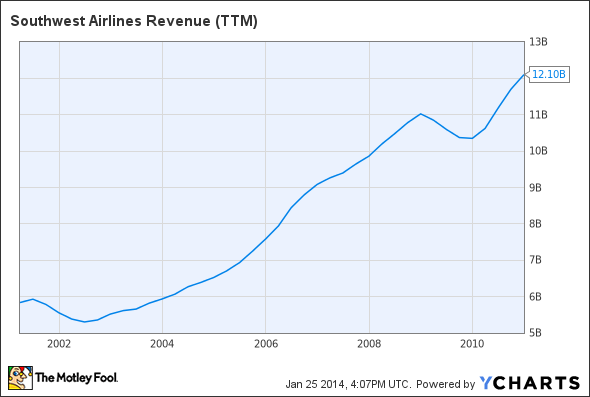 However, the legacy carriers have made big strides to reduce their costs in the last few years. Meanwhile, a new crop of "ultra-low-cost carriers" -- led by Spirit Airlines -- have taken cost-cutting to the extreme, becoming the new low-fare leaders. Southwest has also been distracted as it tries to integrate the Southwest and AirTran brands.

Southwest Airlines' profit has finally gotten off the ground recently.

The company saw strong demand in both business and leisure travel, with Christmas leisure demand being particularly robust. This drove a 4.2% increase in PRASM (a common measure of unit revenue) during the quarter, which was much better than the recent trend. This strong result was particularly notable because the government shutdown in early October had temporarily dampened travel demand.

Southwest also turned in a great performance on the cost side. Non-fuel unit costs declined during the quarter (excluding the impact of profit sharing), fuel efficiency improved, and fuel prices fell. All of these tailwinds caused Southwest's operating margin to widen by more than six percentage points.

Integrating Southwest and AirTran
The Southwest-AirTran integration has been a long process -- the two airlines agreed to merge more than three years ago -- but the end is near. On the Southwest earnings call, CEO Gary Kelly stated that "this time next year, the AirTran brand will be retired, and it will be all Southwest."

More recently, Southwest has started to optimize the combined route network. Most notably, in November, the company revamped its schedule in Atlanta, where AirTran has operated a hub. Atlanta flights were previously concentrated in big morning and evening blocks to facilitate connections. Now, Southwest has instituted a "point-to-point" schedule designed to capture more profitable origin/destination traffic in Atlanta.

The finish line is in sight
In 2014, Southwest will be able to capture the full benefit of these integration initiatives. It will also continue to optimize its route network in preparation for the move to a single brand by the end of the year. By 2015, Southwest should be achieving the full benefit of its merger synergies.

For investors, this means you can probably expect continued margin expansion from Southwest for the next two years. A return to double-digit, operating margins seems very achievable within that time frame, and this will drive significant earnings growth. At that point, the company would be well-positioned to consider a return to faster organic growth.