Las Vegas Sands (NYSE:LVS) reports earnings after the market closes on Wednesday, and it should be another record quarter for the company. Here are a few key things to look for when the numbers come out.

Macau casino growth
We know that Macau's fourth-quarter gaming revenue grew 23.9% year over year and 12.3% quarter over quarter, so that's the basis of comparison for resort revenue and EBITDA. The general trend has been for gaming dollars to flow more heavily to Cotai, where Las Vegas Sands has three resorts, and away from the Macau Peninsula, where Sands Macau is located. 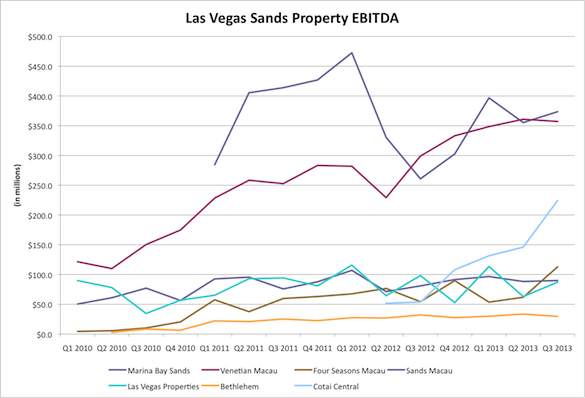 The performance of Sands Macau will also give us a peek into how Wynn Resorts (NASDAQ:WYNN) and MGM Resorts (NYSE:MGM) did in Macau last quarter.

Marina Bay Sands is one of the most iconic buildings in Singapore and is Las Vegas Sands' most profitable resort.

Singapore's performance
Marina Bay Sands in Singapore is still Las Vegas Sands' most profitable property, but it's off its 2012 peak of quarterly EBITDA and has experienced bad luck for several quarters now. Luck doesn't generally stay bad for more than a quarter or two, so we may be seeing different behaviors in Singapore than the industry is used to in Macau or the U.S.

As I pointed out in my guide to understanding gaming earnings, the amount of time players sit at tables can skew non-rolling gaming win and therefore make a company appear lucky or unlucky. If hold remains low, we may just be seeing players stay at tables for a shorter amount of time and the casino may need to expect a lower hold percentage range long term.

Construction update on The Parisian
Sheldon Adelson wants to be the first to open the next phase of casino resorts in Macau, and the $2.7 billion The Parisian resort will have to be pulled off without a hitch. Management has said the resort will open in late 2015, ahead of Wynn Palace and around the same time as Melco Crown's Studio City, which isn't approved for table games anyway.

I'll be looking for any timeline update because less than two years is a fast time frame for building a resort with 3,000 rooms. Wynn, MGM, Melco Crown, Galaxy, and SJM are also fighting for labor to build resorts on Cotai, so just getting enough workers could be a challenge.

Expect a lot of talk about The Parisian as well as other growth expansions on the conference call.

Check back here on Fool.com for coverage once the numbers are out. Growth will be key for everyone in gaming because stocks have gotten expensive across the industry, so investors are expecting big-time numbers.