Generic competition is taking a toll on Pfizer, but it may not be as bad as it looks

Shares of big pharma company Pfizer (PFE -0.43%) closed the day up more than 2.5% after reporting its fourth quarter results. The company beat consensus EPS and revenue estimates, but it continues to battle the effects of the patent cliff. In 2011, the company lost exclusivity for its blockbuster cholesterol-fighter Lipitor, knocking sales down 17% in 2012. Pfizer has impressively held on to sales of what used to be the best-selling drug in the world, with Lipitor bringing in $611 million last quarter.

Pfizer is also wrestling with lower sales for its top selling Viagra, a drug that lost exclusivity in key overseas markets last year, and lower revenue tied to its partnership with Amgen on the blockbuster drug Enbrel.

Diving into the numbers
The pharmaceutical giant earned roughly $2.5 billion last quarter, or $0.39 per share. That's a big drop from the $6.3 billion, or $0.85 per share it earned a year ago.

However, the slide isn't as scary as it seems. Last year's profit was pumped up by the sale of its nutritional business, a one-time event that shouldn't really be taken into account if investors want to make apples-to-apples comparisons. Adjusted earnings were a friendlier $0.56 per share, which is above the adjusted $0.46 reported last year.

And although few will cheer a 2% dip in revenue to $13.56 billion, sales weren't a disaster. If you toss aside the impact of converting overseas sales back to the dollar, sales would actually have grown 1%. For the full year, sales slackened 4% after adjusting for currency. 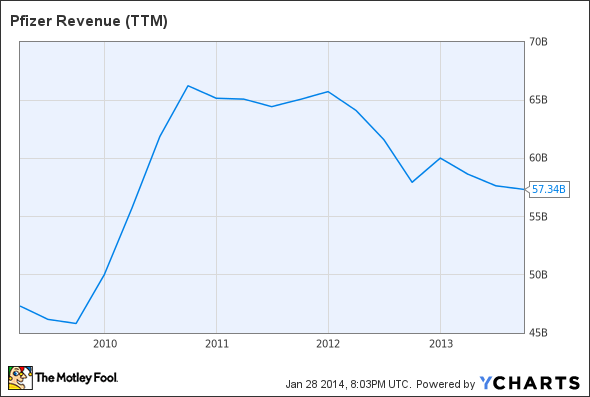 Pfizer's best-performing drug last quarter remained Lyrica. Sales of Lyrica were up 11% from last year in Q4 thanks in part to a mid 2012 label expansion to include neuropathic pain in spinal cord patients. The company's pneumonia vaccine Prevnar grew sales 3% to $1.1 billion. Enbrel, which Pfizer sells overseas and is marketed by Amgen in America, rounded out Pfizer's billion-a-quarter club.

Pfizer will need overseas sales of Enbrel, which gained 5% year-over-year in the quarter, to remain solid given its collaboration with Amgen on North American sales ended in October. As a result of the deal ending, Amgen will only pay Pfizer a small royalty on U.S. sales for the next three years, rather than a share in the drug's U.S. profit.

Tripping on its way to recovery
It's troubling to learn Pfizer's late stage lung cancer drug dacomitinib failed in two recently reported trials. No drug developer wants to invest that much time and money only to stumble a few feet from the goal line. Unfortunately, that's what happened with dacomitinib when it failed to outperform Tarceva in one of its phase 3 trials and couldn't demonstrate an improvement in overall survival in the other.

However, Pfizer is far from out of options. The company's pipeline may be a bit thinner, but it still has a number of important drugs in the works. One of those is it's breast cancer drug palbociclib. Pfizer will likely report top line Phase 2 data for palbociclib ahead of ASCO, which is held in June. The company also plans to provide phase 2b data for its PCSK9 cholesterol drug RN316 this spring.  PCSK9 drugs are a hot area for development, with Amgen advancing AMG-145 and Sanofi and Regeneron working on alirocumab.

Additional upcoming data includes phase 3 readouts for its autoimmune drug Xeljanz for psoriasis. Pfizer is also teamed up with Merck (MRK -0.40%) on ertugliflozin, an SGLT2 inhibitor for the treatment of type 2 diabetes.Merck will pay 60% of the costs and get 60% of the profits if the drug is ever commercialized.  The deal appears a good one for both companies given Pfizer gets a partner to share the expense and Merck gets some insulation for its top selling DPP-4 diabetes drug, Januvia.

Eventually, those drugs in the pipeline may complement sales growth for Pfizer's recently approved drugs, which include cancer treatments Xalkori and Inlyta. Revenue from those two drugs roughly doubled in the quarter from a year ago to nearly $200 million.  Another new drug, Xeljanz, which was approved in late 2012 for rheumatoid arthritis and competes with Merck's $2 billion a year Remicade, contributed $46 million in sales last quarter.

Fool-worthy final thoughts
Big challenges mean big changes and that's meant unloading non-core assets such as Pfizer's nutrition business and its animal health business. Pfizer is also spending 6% less on R&D in 2013 than it did in 2012.

For 2014, Pfizer is guiding for $2.20 to $2.30 in earnings per share. That's thanks to buying back nearly $5 billion worth of stock in the fourth quarter and a whopping $16 billion worth of stock during 2013. Overall, Pfizer's moves cut the number of shares outstanding by 13% last year. Those buybacks will do a lot of heavy lifting when it comes to converting sales into profit this year given revenue is expected fall to $49.2 to $51.2 billion from $51.5 in 2013, but I'd much prefer to see profit come from launching new drugs than buybacks.

Todd Campbell has no position in any stocks mentioned. Todd owns E.B. Capital Markets, LLC. E.B. Capital's clients may or may not have positions in the companies mentioned. Todd also owns Gundalow Advisor's, LLC. Gundalow's clients do not have positions in the companies mentioned.  The Motley Fool has no position in any of the stocks mentioned. We Fools may not all hold the same opinions, but we all believe that considering a diverse range of insights makes us better investors. The Motley Fool has a disclosure policy.