After years of declining oil demand, it looks like America is once again driving the demand picture across the globe.

You know who has had a pretty frustrating job lately? People who make projections for oil demand and supplies. Just when we thought that the U.S. was on track to steadily decrease its total oil consumption, recent data from the International Energy Agency basically threw that projection into the rubbish.

So what exactly does this mean for the U.S.? Are we headed back to our gas-guzzling ways, or is this just one of those statistical aberrations that happen from time to time? Let's take a look at the numbers and see what it could mean. 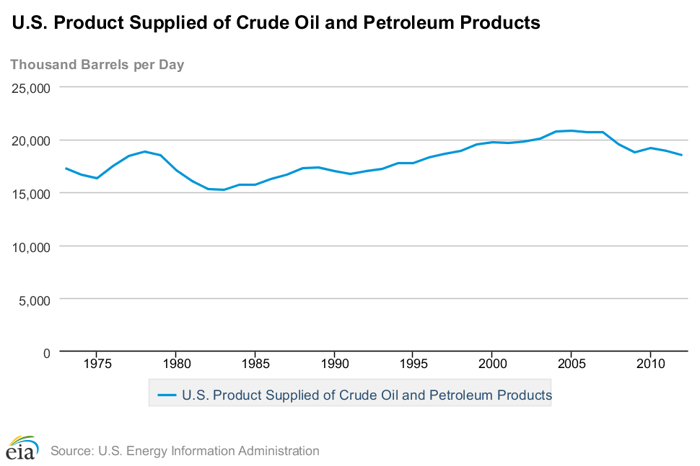 Ever since 2005, total U.S. oil demand has been on a pretty steady decline. Between then and 2012, the U.S. saw a reduction in total oil supplied of more than 2 million barrels per day, and had cut consumption all the way to levels not seen since the early 1990s. According to the International Energy Agency -- not the U.S. Energy Information Agency, although their acronyms are really close --total U.S. oil demand increased by almost 400,000 barrels per day, which equates to about a 2% increase.

Two percent never really sounds like a big deal, but when talking about big numbers like these, it really starts to add up. This increase in demand is also in stark contrast to the IEA's projection that U.S. oil demand would decrease last year and continue to do so in 2014. With this new information in hand, the IEA expects demand to grow again.

Making sense of it all
Keeping track of the supply and demand picture for oil has been so crazy lately that it's enough to make your head spin. China had one of its slowest demand growth years in decades while America and Europe are starting to see an uptick in consumption after years of decline. This, again, stands in great contrast to what we knew over the past few years.

So, for those of us who have investments in the energy space, does this mean we need to change our investment theses? Here are a few things to consider:

Reduced oil demand isn't as structural as we thought
There was the theory that oil consumption in the U.S. was declining because of a fundamental shift away from driving and increased efficiency of vehicles. While there is a clear indication that engines are more efficient, the idea that we are driving less may be a bit misleading.

The fact is that we are driving just as much, if not more, than previously. So that structural decline in oil consumption has been more a product of engine efficiency than less driving. This should be encouraging to just about every automotive manufacturer out there.

This means we can scrap those plans to export crude oil, right?
There is a big argument brewing in the U.S. about whether we should export crude oil or not. As weird as it may seem, these two things aren't that directly related. The need to export crude oil isn't because of the total amount we consume; it's actually because we are running out of capacity to refine the particular type of oil that we produce from shale in America.

The thing that will change, though, is the amount of petroleum products that we export. As of last quarter, Valero (VLO -0.30%), Phillips 66 (PSX 0.45%), and Marathon Petroleum (MPC -0.55%)-- the three largest independent refiners in America -- were combining to export more than 750,000 barrels per day of gasoline and diesel. All told, we are averaging just under 3 million barrels per day of finished petroleum product exports. This has been a surprisingly effective way for refiners to keep margins high while domestic prices have not been as lucrative. By exporting to markets like Europe and Latin America, they have been able to garner a premium price for their product.

As domestic consumption picks up, we may see a slight uptick in prices, but refiners produce more than enough fuel today to keep us going with plenty left over for exports.

What about my energy investments?
Again, an uptick in domestic consumption does not necessarily mean we will be able to absorb all of the new supplies coming online. So there is still the threat that prices could go down because of an infrastructure bottleneck. This could be devastating for certain shale players that are plowing massive amounts of capital back into the business to grow production, which is just about every independent oil and gas player in the U.S. today. Overall, though, this is a shorter-term threat.

Increased U.S. demand is more likely a longer-term indicator that the need for oil in the U.S. will remain strong for years to come. So while some companies may be sweating weaker prices as our energy infrastructure gets backed up, rest assured that there is still plenty of room to run left in the oil and gas space for years to come.

What a Fool believes
When you combine an economy still having fits and starts as it emerges from a major recession, a domestic surge in oil production, and a strong effort to curb oil consumption through increased efficiency, it makes for a difficult environment for investors to parse out how to invest in this space. Overall, though, these trends are only half of the equation. After figuring out where the oil markets will go, then you need to find the right companies to invest in.

Fool contributor Tyler Crowe has no position in any stocks mentioned. You can follow him at Fool.com under the handle TMFDirtyBird, on Google+, or on Twitter @TylerCroweFool.