The cold winter weather that has gripped much of the country has caused natural gas stockpiles to shrink and has driven prices up to levels not seen since 2011. Here's one way to help you deal with the high cost of heating your home this year.

Over the past few weeks, much of the United States has suffered from incredibly cold winter weather, causing many families to increase their consumption of energy in order to heat their homes and businesses. As approximately 50% of the homes in the United States are heated by natural gas, this fossil fuel has seen an enormous increase in consumption as people struggle to stay warm.

This surge in consumption has been so great that it is already beginning to strain supplies of the fuel in the highly populated Northeast. This has caused the price of natural gas to soar to levels not seen since 2010, with the February 14 NYMEX natural gas futures trading for $5.11/MMBtu at the time of writing.

So what can I do about it?
This is one question that you may ask yourself as you are faced with the prospect of higher heating bills. One option is to position your investment portfolio to benefit from rising natural gas prices and usage. A relatively simple way to do this is to purchase shares of Vanguard Natural Resources (NASDAQ: VNR).

About Vanguard Natural Resources
Vanguard Natural Resources is a publicly traded limited liability company focused on the acquisition and development of oil and natural gas producing properties.  The company operates primarily in the southern portion of the Appalachian Basin in Kentucky and Tennessee, the Permian Basin in West Texas and New Mexico, South Texas, and Mississippi. The company also operates in the Williston Basin located in North Dakota and Montana, the Big Horn Basin in Montana and Wyoming, and in other areas.

For much of its life, Vanguard Natural Resources was primarily a gas producer with only a relatively small percentage of its production being oil. However, that has begun to change following a series of acquisitions so that the company now has a more balanced production profile than it once did. Fortunately, the company still has a sufficiently high percentage of its production mix as natural gas that it remains an excellent way to invest in the fossil fuel. 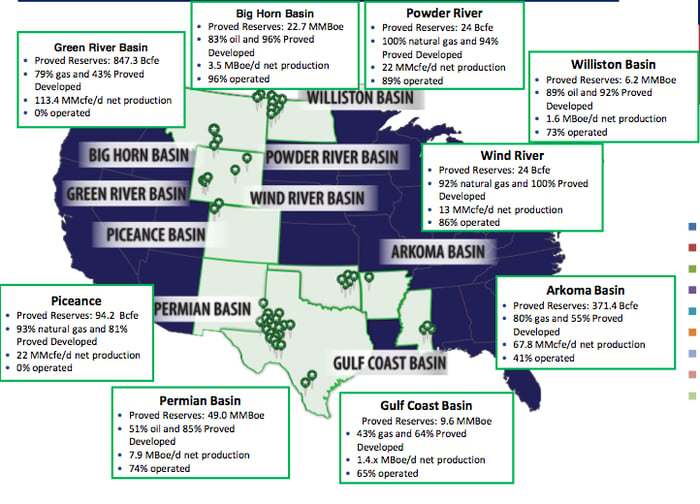 Hedging strategy
Like other publicly traded limited liability companies such as Linn Energy (LINEQ), Vanguard Natural Resources uses a hedging strategy to reduce its exposure to commodity prices. This allows the company to enjoy much more stable cash flows than it would were the company fully exposed to commodity price fluctuations. However, it does admittedly reduce the company's appeal as a way to make short-term bets on the price of natural gas. However, long-term investors will likely appreciate the stability that Vanguard's cash flows enjoy due to this hedging.

Vanguard has, primarily through the use of NYMEX and basis swaps, locked in a price of $4.61 per MMBtu through the first half of 2017. This price is a weighted average, and so the company will not receive this exact price through 2017. Instead its hedged price increases progressively going forward.

The company's hedged price is lower than the current price of natural gas which is somewhat disappointing.  However, please note that 14% of this year's natural gas production is unhedged.  Therefore, the company is still likely to see its cash flows increase significantly this year due to the very cold winter.

Low costs equate to high margins
One area in which Vanguard Natural Resources truly shines is in its ability to control its costs. This is particularly noticeable when the company is compared to its peers.

One of the highest costs that an exploration and production company has is lease operating expenses. These are the costs that the company must incur in order to operate and maintain its equipment at the production site. On average, these costs alone can run up to 25% of the total revenue generated through the sale of oil and gas. By leveraging the abilities and expertise of other operators where appropriate as well as other methods, Vanguard is able to keep these costs down to a lower percentage of revenue than other operators. 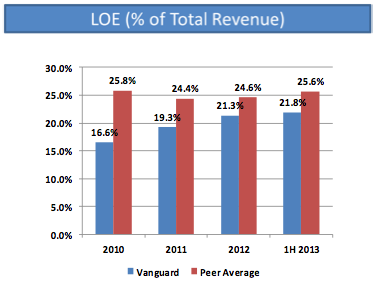 The company's lower costs will result in it having higher profits and cash flows than its peers, all else being equal. This is something that benefits unitholders when it comes time to distribute its profits.

High distribution yield
A core element of Vanguard's strategy is leveraging the company's superior cash flow to pay out large, sustainable distributions to its unitholders. The company has succeeded in this and has not only paid but increased its distribution from year to year. 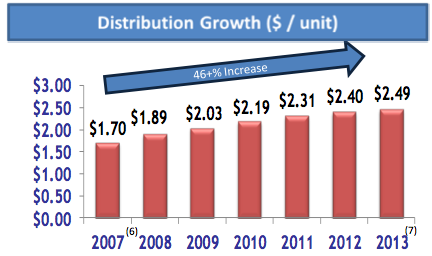 This policy has resulted in Vanguard having one of the highest distribution yields in the energy space. The company most recently announced a monthly distribution of $0.2075, which works out to $2.49 annualized. This gives Vanguard a distribution yield of 8.2% at its current price. Presumably, Vanguard will increase its distribution going forward as it benefits from higher gas prices. Thus, not only will the company help to hedge your heating bills through the potential appreciation that higher natural gas prices may bring, but it could even help you pay them.