AMD talks a big game, but even its own marketing materials suggest that its next-generation ARM chip is likely to be a dud.

Advanced Micro Devices (AMD -1.72%) has shown staggering resilience in the face of many years of financial peril. Whenever a business begins to crumble from within, management looks to promote some "next big" idea. Sometimes the idea is good, but the execution is often poor, and other times the idea just wasn't meant to be. After AMD lost nearly all of its x86 server share, it hopped onto the ARM (ARMH) server bandwagon.

There's nothing magical about ARM servers
Marketing headlines that ARM server players typically try to push are usually of one or more of the following flavors:

Unfortunately, while these marketing points may be catchy, they're almost patently false. From a power consumption standpoint, the inherent difference between the ARM instruction set and the Intel (INTC 0.14%) x86 instruction set is negligible (and far outweighed by Intel's design expertise and manufacturing lead). What's really interesting is that AMD's own data (note that AMD is using ARM's latest-and-greatest Cortex A57 IP) seems to suggest that its upcoming ARM server chips actually isn't competitive on performance/watt against Intel's currently shipping Avoton micro-server part.

Illustrating the point
Check out the following information on Anandtech.com via AMD,

The upcoming ARM-based Opteron A1100 scores 80 in SPECint_rate, an industry standard CPU benchmark that often informs the decisions of server buyers. Note that this performance is achieved in a 25W power envelope (according to AMD's TDP rating). 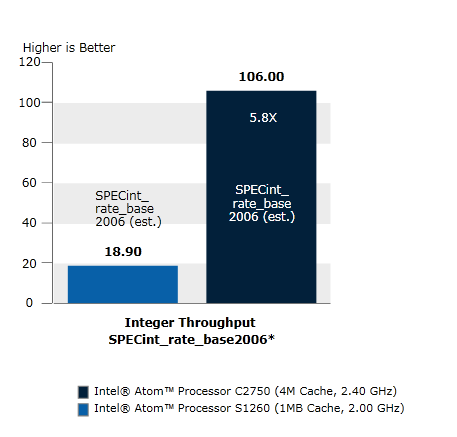 Note that the Atom C2750 has been shipping and available for purchase since late 2013, while AMD's part won't be available until late 2014 (it begins sampling in March). This means that Intel could sit back and not bother to release a next-generation part and still have a performance/watt advantage. Unfortunately for AMD, though, Intel plans to release not just one, but two new parts for this space, built on its next-generation "Broadwell" and "Airmont" processor cores, in late 2014. 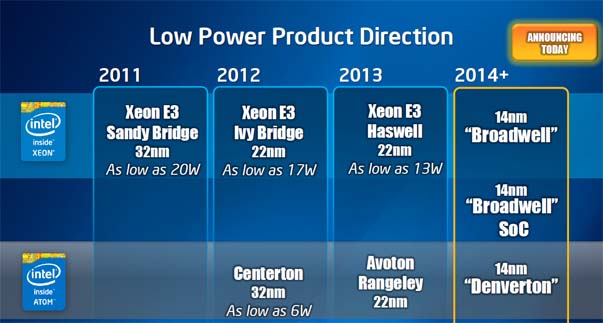 These will have higher performing cores and, likely, more of them. Also, it is likely that the rest of the non-core parts of the SoC will be significantly enhanced. In this case, things may get very ugly for AMD's competitive situation very quickly.

Foolish bottom line
AMD is wonderful at drumming up expectations for its next-generation server products, but the reality is that AMD's own numbers suggest that this upcoming ARM part won't be competitive. This doesn't even take into account the relative immaturity of the ARM software ecosystem for servers (a big disadvantage), nor does it take into account Intel's superior cost structure.

AMD has a very tough road ahead in servers -- ARM is not the panacea that AMD tries to pitch it as. The same fundamental problems that plagued AMD's x86 server efforts will, once again, plague AMD (and the other ARM server vendors) in servers. Be very wary of buying the hype.