In 2013, Polaris (NYSE:PII) launched the Indian heavyweight motorcycle brand and since then sales have been climbing up according to CEO Scott Wine. The CEO stated in a recent conference call that being competitive in the motorcycle business requires, "[A] great brand, highly refined bikes, premium distribution, a whole lot of cash and a world-class team." Wine believes Polaris has these requirements, but will that be enough to compete with Harley-Davidson (NYSE:HOG).

The Indian motorcycle brand has been around since the turn of the last century; the first Indian was sold in 1902, one year before Harley was offered to the public. The company improved and sold motorcycles for 50 years until declining sales forced the company to stop production in 1953. The brand, revived in 1998 and acquired by Polaris in 2011, is recognizable and has given Polaris a historic name to market with quality bikes.

The 2014 line of Indian motorcycles have been praised by enthusiasts and critics. MotorcycleUSA.com editor Justin Dawes said about the Chief Vintage, "They really paid attention to every little detail on this bike. Every little thing – the logos, all the castings and the millwork, and the body work and the awesome leather seats and bags that're old and distressed looking, all of it is spot-on for an American cruiser. You can tell that they really cared about this bike when they built it."

According to a test conducted by the website, the Chief Vintage has an impressive engine to accompany its attractive looks. With a Thunder Stroke 111 engine, it has more power than the comparable Harley-Davidson Heritage Softail Classic. On the other hand, the Heritage is a lighter bike with easier maneuverability. Ultimately it will come down to rider preference, but there is no denying that Polaris has made a solid motorcycle to accompany the Indian brand name and challenge Harley-Davidson.

New vs. old
When you look at Polaris's competition, you can see that Harley-Davidson has more cash and a higher gross margin because a smaller percentage of Polaris's revenue comes from high-margin heavyweight motorcycles.

Polaris's free cash flow is currently at $179.2 million, in between those of Harley-Davidson and Arctic Cat (NASDAQ:ACAT). 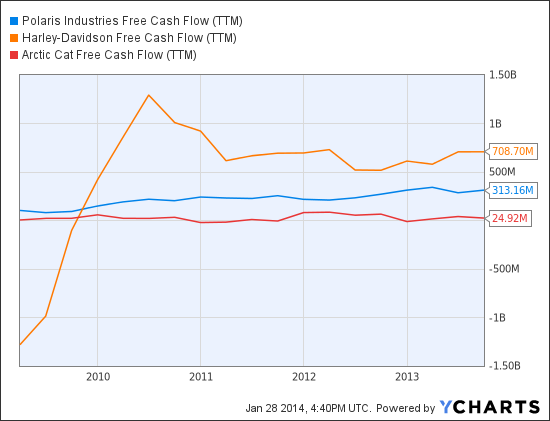 Harley currently has $5.18 billion in total debt. $4.07 billion of Harley's debt is attributed to Harley-Davidson Financial Services, a source of financing for motorcycles purchased at the retail and wholesale levels, and is secured by the motorcycles it finances. When this is paired with its high cash flow, Harley should be able to pay off its debts. Polaris might have a lower free cash flow but the company only has $107.22 million in debt outstanding leaving the company room to make strategic acquisitions and fund new initiatives.

Arctic Cat produces competing snowmobiles and ATVs and has a lower gross margin of 22% compared to the margins of Polaris and Harley, which are 30% and 39%, respectively. It seems like heavyweight motorcycles will help Polaris improve its margins which will translate to earnings.

The company's motorcycle division, comprised of Indian and Victory brand motorcycles, experienced a 6% revenue drop for the third quarter of 2013. The drop has been attributed to shipment adjustments caused by the company's shift to the "Lean" business model. The drop should be remedied once the transition is complete.

Foolish thoughts
Warren Buffett once said, "Any company that gets its customers to tattoo ads on its chest can't be all bad."

With its Indian launch, Polaris has designed motorcycles to be sold under a brand name that will inspire new tattoos and bring back memories from the old ones. It will help grow the company's presence in the heavyweight motorcycle business. It appears that Indian has made a comeback and will possibly pose a challenge Harley-Davidson down the road. Polaris invested heavily in this launch and the efforts should yield investor value in the following years.

Editors Note: article previously stated Harley had $5.18 billion in debt. This has been updated to reflect Harley's financial division and to better reflect the company's financial position.