Pharamceutical giant Novartis (NVS -2.64%) recently reported its fourth quarter earnings, which missed analyst estimates on both the top and bottom lines due to sluggish sales of its blockbuster blood pressure drug Diovan.

Novartis' net income rose 2% year over year, to $2.06 billion, as its revenue climbed 2%, to $15.08 billion. Analysts polled by Dow Jones Newswires had expected the Swiss drugmaker to earn $2.4 billion on revenue of $15.09 billion.

A breakdown by segments indicates that Novartis' highest growth segments -- Vaccines & Diagnostics and Consumer Health -- are also the least significant to its top line. Meanwhile, the growth of its highest-revenue unit, pharmaceuticals, has stalled out.

Even though mediocre top- and bottom-line growth has become the status quo for Novartis, the company's stock is still up nearly 20% during the past 12 months. Novartis has outperformed industry laggards like Pfizer, Sanofi, and GlaxoSmithKline, but has underperformed AstraZeneca and the overall market: 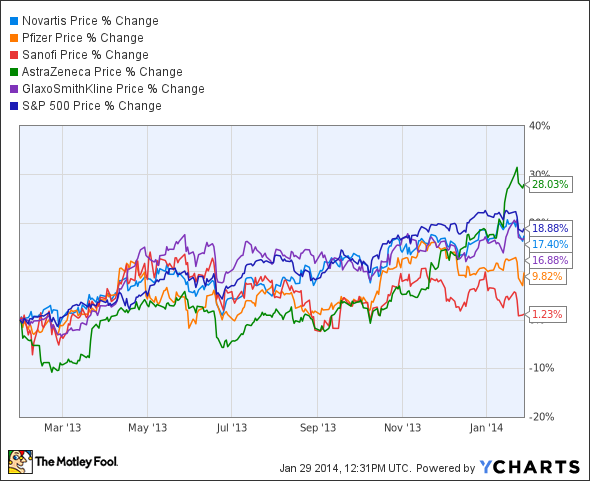 Therefore, let's filter out the noise, and take a look at three of the most important things that could determine Novartis' future.

1. The Diovan dilemma remains unresolved
Diovan is Novartis' second top-selling drug, generating $3.5 billion in sales (11% of the pharmaceutical segment's revenue) in fiscal 2013. However, that was a 20% year-over-year decline, mainly due to its loss of patent exclusivity in Europe, the U.S., and Canada.

A generic Diovan monotherapy has not been approved by the FDA yet, but generic versions of Diovan HCT (a combination of Diovan and hydrochlorothiazide) were released by Mylan, Actavis, and Aurobindo, among others, throughout 2013.

Ninety percent of Diovan sales come from the U.S., although the drug has posted slight growth in China, Asia, Latin America, the Middle East, and Africa. Investors should note that Novartis is currently facing criminal charges in Japan in regards to allegedly falsified data regarding Diovan. Novartis forecasts that generic versions of Diovan could shave nearly $2.2 billion, or the equivalent of 7% of Novartis' 2013 revenue, off the company's 2014 top line.

Regeneron's (REGN -0.06%) Eylea, a competing treatment currently approved for Wet AMD and CRVO, is gaining ground on Lucentis -- last quarter, sales of Eylea soared 67% year over year, to $363 million. Regeneron forecasts that it will finish fiscal 2013 with $1.4 billion in Eylea sales. Analysts believe that Eylea has the potential to top Lucentis, with eventual peak sales of $4 billion if it is approved for additional indications.

Gilenya, Novartis' oral treatment for multiple sclerosis (MS), may also be running out of room to run. Sales of the drug soared 94% year over year, to $1.9 billion in 2013, putting it uncomfortably close to its forecast peak sales potential of $2.1 billion.

There's one main reason that Gilenya sales could peak next year -- a new oral MS drug, Biogen's (BIIB 0.24%) Tecfidera, which was approved in March 2013, has a more attractive safety profile. As a result, Tecfidera is widely expected to eventually eclipse Gilenya, with peak sales of $3.3 billion.

3. Three long-term growth catalysts
Looking ahead, there are three key areas of growth that could lift Novartis in the future -- respiratory treatments, next-generation cancer drugs, and biosimilars.

These respiratory drugs are expected to become the next pillar of growth for Novartis but will also send it on a collision course with GlaxoSmithKline, which has a strong, entrenched presence in respiratory treatments. GSK's top respiratory drugs include its blockbuster asthma drug Advair, which generated $8.1 billion in sales in fiscal 2012, and two new COPD treatments developed with Theravance -- Revlar/Breo Ellipta, and Anoro Ellipta.

Novartis has also reported a stream of positive results from is growing oncology department. Throughout 2013, Novartis reported positive data for its multiple myeloma drug LBH589 and leukemia drug CTL019.

Most importantly, Novartis kept its breast cancer drug LEE011 a secret until it reached phase 3 trials -- which surprised Pfizer, since both LEE011 and Pfizer's palbociclib (also in phase 3 trials) are next-generation CDK, or cyclin dependent kinases, inhibitors. CDK inhibitors are believed to be able to treat a larger group of breast cancer patients than currently available targeted treatments.

Lastly, Novartis' Sandoz unit started a phase 3 trial last month of a biosimilar version of AbbVie's Humira, one of the top-selling drugs in the world, with $9.3 billion in 2012 sales . A generic version of Humira, which could be sold after AbbVie's patent expires in 2016, could boost sales at Sandoz considerably.

The Foolish takeaway
In closing, Novartis will likely underperform the market and several of its industry peers in the short term, but it won't crash and burn. Novartis knows this -- that's why it just proposed a 7% boost to its annual dividend.

In the short term, investors will likely fret over the uncertain futures of Diovan, Gilenya, and Lucentis; but in the long term, Novartis' growth prospects look considerably brighter. Respiratory drugs, cancer drugs, and biosimilars could all be strong growth catalysts for Novartis during the next decade.