U.S. automakers enjoyed total sales of 15.6 million vehicles last year. However, both the December and annual numbers didn't meet expectations. Sales in December moved up by a meager 0.3% over last year, as the colder weather led to fewer purchases. This is also because most people are still willing to get their existing vehicles repaired rather than buy a new one, which creates great opportunities for aftermarket retailers.

In fact, auto-parts retailers benefit from colder weather because it leads to more wear and tear of auto parts, which brings in more customers. As indicated by NPD Group, there are opportunities in the aftermarket-retail space in 2014, which in turn should be advantageous for investors. However, picking the best from the whole lot in order to maximize gains is very important.

Some prominent players
AutoZone (NYSE:AZO), O'Reilly Automotive (NASDAQ:ORLY), and Advance Auto Parts (NYSE:AAP) are some of the most promising industry players. Each of them has been performing well, as reflected by their stock price movements over the last five years: 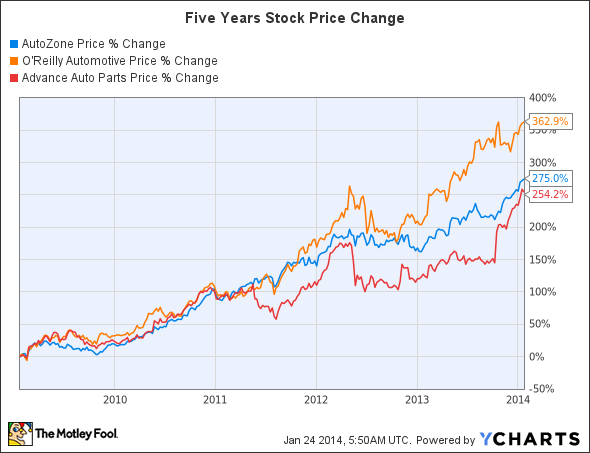 All the three players, AutoZone, O'Reilly, and Advance Auto Parts, performed well with returns of 275%, 362.9%, and 254.2%, respectively, during the period. Although O'Reilly leads the pack with the highest return, Advance Auto Parts' strategic moves have helped the retailer outpace O'Reilly in the last year. 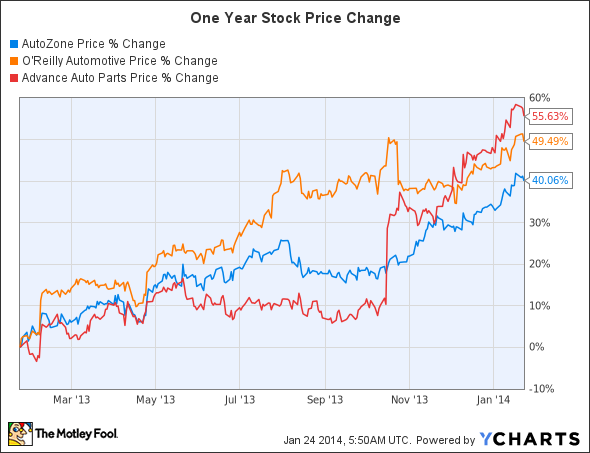 Advance Auto's stock price appreciated 55.6% over the last year as the retailer expanded its commercial business. As mentioned by fellow writer Harsh Chauhan, the commercial market looks good to go, and all the three players are trying to make the most of this growing business.

With the acquisition of 124 BWP stores, Advance Auto expanded its reach in the Northeastern market. Furthermore, it acquired General Parts International this month, which has made the acquirer the largest player in the auto-parts industry, with 5,400 stores. Hence, this company should become even more rewarding for investors.

O'Reilly too has been performing impressively, mainly because of its high dependence on the commercial segment. In fact, 40% of its revenue comes from the commercial business, which is helping the company boost its revenue. O'Reilly is also planning to increase its presence by adding more stores to its network. The retailer plans to open 200 new stores during 2014, which should lead to higher revenue growth.

AutoZone has also expanded its commercial segment by introducing commercial programs in 125 stores. This has already started bearing fruit, as its recently-posted quarter witnessed a 14% jump in the commercial business. However, it has been unable to outperform its industry peers and has provided the lowest return to its investors.

Final view
It is interesting to see how all the three players are trying to race ahead by strengthening their commercial businesses. With the increase in age of vehicles, each of the auto-parts retailers is expected to benefit. However, Advance Auto Parts seems to have made a smart move by acquiring General Parts, making it the largest retailer. Moreover, it is expected to grow the most in the future. Hence, Advance Auto Parts should be the best pick for your portfolio.