NextEra Energy (NYSE:NEE) reported earnings yesterday, matching revenue estimates but missing on its bottom line. With a massive wind portfolio and a major natural gas pipeline on the way, the future of this dividend stock is a hot topic for investors. Here's what you need to know.

For fiscal 2013 overall, adjusted EPS came in at $4.97, a 7.3% advance over fiscal 2012's earnings. And for the previous three quarters of the year, NextEra consistently beat analyst expectations, with an especially large 13.2% surprise for the second quarter.

For a longer-term perspective, here's how NextEra Energy's sales and earnings have held up over the past five years. While sales have dropped 3.2%, adjusted earnings have headed 12.6% higher. 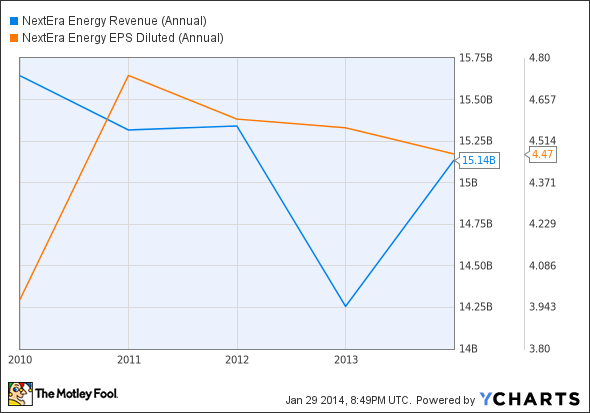 Soaring stock price
NextEra Energy has had a good year, and this latest earnings report didn't change that. But its shares have soared 22.4% in the past year, compared to just 7.1% for the Dow Jones Utilities Average -- and numbers alone don't explain why. 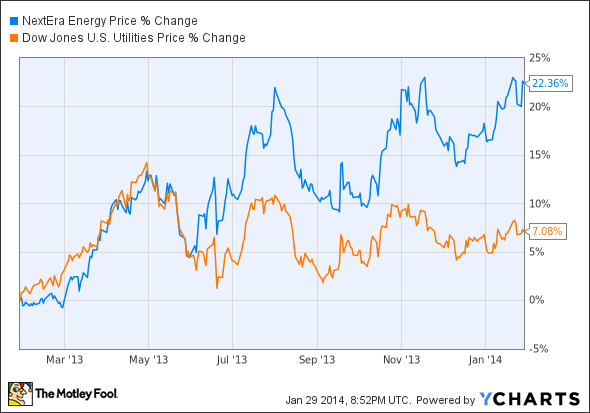 NextEra Energy has taken a different approach from many of its competitors. As the leading renewable energy generator in North America, this utility's recent success was built on the back of wind. NextEra now operates more than 10,000 net megawatts of wind across 19 states and four Canadian provinces.

And with Congress' 2013 extension of production tax credits for renewable energy, NextEra will continue to be a big part of the projected 34% increase in wind power by 2016.

Diversify, diversify, diversify
But NextEra's real attraction is more than its renewables. Unlike some other companies heavily invested in a single energy source, NextEra remains reasonably diversified. Nuclear-centric Exelon (NASDAQ:EXC) has been hammered over the past few years as natural gas rendered its atomic energy uncompetitive. At 19,000 MW, Exelon produces 20% of the U.S. entire supply of nuclear power. And while that might be a boon as natural gas prices start to head higher, it's certainly been a burden as shares have shaved off a whopping 50% of their value in the last five years.

Unlike Exelon, NextEra Energy's generation capacity is more diversified. And while wind makes up 56% of its energy portfolio, it enjoys more stability due to government support.. 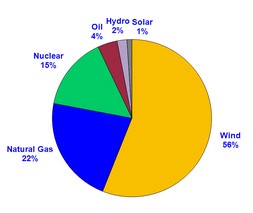 Natural gas notions
But possibly the biggest reasons investors have been running to NextEra Energy is its natural gas notions. The utility's Florida Power & Light subsidiary offers regulated earnings at a solid return on equity of 11.25%, and the company has big plans for its Florida operations.

NextEra Energy announced in July 2013 that it would partner with Spectra Energy (NYSE:SE) and its master limited partnership Spectra Energy Partners (NYSE:SEP) to invest $3 billion toward the construction of Florida's third major natural gas pipeline. Regulatory approval continues to pour in, and the companies expect construction to be completed in mid-2017. 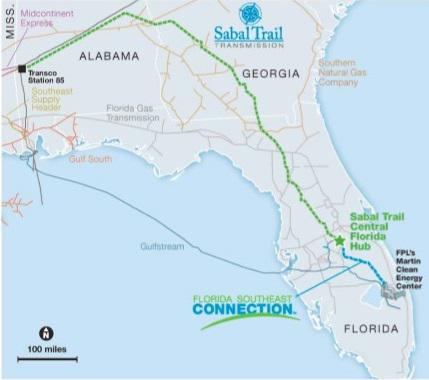 Priced for perfection?
Despite the $0.02 earnings disappointment, NextEra Energy continues to deliver. On most valuation metrics, NextEra stock is pricier than its peers. But its margins continue to kill competition as its renewable portfolio pays off and its regulated business rakes in revenue. For the long-term investor, NextEra Energy's proven model makes it a prime candidate for your dividend stock portfolio.