Shamus Funk
(ProfessorFunk)
Author Bio
Shamus is a freelance writer for the Motley Fool focusing on energy, agriculture, and materials. He has his Ph.D. in Chemistry from North Dakota State University. After graduation, Shamus worked at a small biotechnology firm before becoming a professor of chemistry.

Both the natural gas and the fertilizer industries have seen major explosions in the past year, and unfortunately they weren't the kind hoped for by investors. The Canadian pipeline explosion that spurred requests for reduced natural gas usage throughout much of the Midwest also brought the likelihood of higher natural gas prices to the forefront of the public attention. PotashCorp (NYSE:POT), CF Industries (NYSE:CF), Agrium (NYSE: AGU), and other big players in the fertilizer industry are highly dependent on natural gas for the production of ammonia-based fertilizers. Will rising natural gas prices make a big impact on the abilities of these companies to turn a profit? 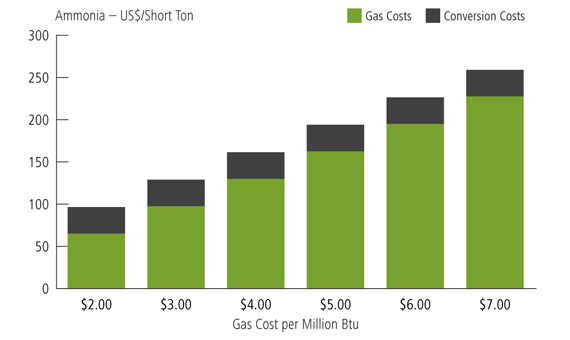 Source: PotashCorp-Average cost of producing a ton of ammonia in the US

The extended cold streak, exacerbated by the call from Xcel Energy (NASDAQ:XEL) to customers in Minnesota, North Dakota, and Wisconsin to lower thermostats to 60°F to ensure that services can be provided without interruption, suggests that natural gas prices are heading up. Utility companies are largely exempt from fluctuations in natural gas prices due to large purchase agreements that are designed to last the season. Fertilizer companies likewise arrange large purchase agreements and are able to avoid the ridiculous spot prices seen during the depths of the winter season this year. However, depending on exact circumstances, the timing of these agreements may not always coincide with the lowest natural gas prices.

In any case, the best indicator for what fertilizer companies will likely be paying for natural gas is futures prices. The forecast of below-average temperatures across most of the U.S. through mid-February has led to an increase in the price of natural gas futures, which now exceeds $5 per million British thermal units (Btu). At that price, the cost of natural gas accounts for over 80% of overall ammonia production costs.

What does that mean for fertilizer prices
Higher domestic natural gas prices do not necessarily translate to higher nitrogen fertilizer prices. The natural gas price floor has in the past been established by Ukrainian producers who regularly pay more for natural gas than their North American counterparts, and consequently need to sell their fertilizer products at higher prices. Previously this has proved profitable for Agrium and other North American companies enjoying an environment with a large and growing supply of natural gas that is available at comparably low prices.

The rise in U.S. natural gas futures paired with the potential for Ukrainian producers to source more affordable natural gas from Russia could make for a drastic cut in North American producers' margins. Even if fertilizer prices remain constant, expect the increase in natural gas prices to cut into margins. The variability in commodities pricing and the dependence of nitrogen-producing fertilizer companies' success on establishing favorable margins can make investing in fertilizer companies more complex and risky than might otherwise be expected.

The takeaway
The overall production of natural gas is expected to steadily rise over the next twenty years, which is just one indicator that domestic natural gas prices may remain relatively low. Though pipeline explosions, distribution difficulties, and weather-induced demand may cause natural gas spot prices to skyrocket at times, natural gas futures provide the best insight into what margins will be realized from nitrogen fertilizer companies. Investors should keep watch of both the domestic and the international natural gas market if they are interested in fertilizer over the long run, while understanding that the current rise in natural gas futures may cut into fertilizer profits in the short run.