A slew of negative developments have hurt 3-D printing stocks in the short-term, but little damage has been done to the long-term story. 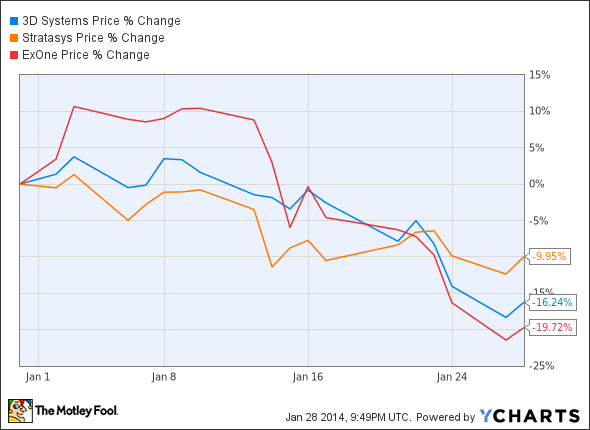 Starting off on the wrong foot
Things started to get rough when Stratasys released its 2014 full-year guidance, which fell short of analyst expectations. The company expects to earn between $2.15 and $2.25 per share in 2014, below the analyst consensus of $2.33. The news sent shares down as much as 12%, though they have recovered some thanks to a recent upgrade by Credit Suisse.

Peeling back the layers, it becomes evident that Stratasys is more focused on growing its business over the long term than it is concerned with short-term profitability. In the coming year, Stratasys plans on increasing its R&D investments to develop new products and will significantly build out its manufacturing capacity in anticipation of future demand. Both of these are healthy signs of things to come and show that management has the right priorities for the business.

The second shoe to drop
The following day, ExOne decided to drop another bomb on 3-D printing stocks by lowering its 2013 full-year revenue guidance. When a company lowers revenue guidance, it can often spark concerns about structural issues affecting the business. Judging by the nearly 20% decline in the stock's price when you account for after hour activity, it's clear that investors were pretty spooked by the news.

However, five of ExOne's printer sales that were expected to close in 2013 have been pushed into 2014, indicating that timing -- not a loss of sales -- was the biggest contributing factor to the guidance revision. On a brighter note, ExOne plans on quadrupling its manufacturing capacity, a telltale sign that the long-term fundamentals likely remain intact. In other words, investors likely overreacted to the news here.

Souring on 3D Systems
Last week, Citron Research published its second bearish report on 3D Systems in less than a year, sending shares lower on the release. Citron placed an "immediate" price target of $56 on shares, and said it believes the stock will be "much lower" over the long term. Among other things, Citron called out 3D Systems' pace of acquisitions as being unsustainable, its "questionable" organic growth revenue rate," its consumer product line being poorly received, its metal printing business being minuscule in relative size, generally poor employee morale, and resources being stretched too thin.

While many of the accusations in the report could potentially threaten the long-term-investment thesis, some of the report's assertions were based on dated and potentially misleading information, especially around 3D Systems' consumer products and its service centers margins. In addition, it's important to recognize that the majority of the information contained within the report has been readily available prior to its release, leading me to believe that this report is likely carrying more weight than it should.

A classic reminder
"In the short run, the market is a voting machine, but in the long run it is a weighing machine." -- Benjamin Graham

From what seems like a relatively simple sentence, investors of all kinds stand to gain some incredibly valuable insights. In the case of 3-D printing stocks, it's clear that short-term sentiment can and likely will continue shifting very quickly. However, it's also clear that, over the longer term, sentiment does not govern stock prices -- fundamentals do. Arguably, fundamentals are the single most important driver of stock prices over the long-term and will determine whether a stock will outperform the market.

In this context, investor moods about 3-D printing stocks have shifted negatively in the short term, but little has changed to negatively affect the five- to 10-year outlook. In one form or another, these businesses are working to solidify their long-term positioning within an industry that's expected to grow by over 19% a year through 2021. Ultimately, I think it's healthy to see sentiment cooling off a bit in a high-growth industry like 3-D printing, because it can offer buying opportunities for long-term investors.