Stocks both here and around the globe are in a modest decline today as the market tries to decipher how to react to generally positive earnings reports and a big pull of capital out of emerging markets. In the U.S., the Department of Commerce said consumer spending was up 0.4% last month, another strong sign for the economy, but that didn't get investors too excited.

Investors continue to pull out of emerging markets, which had benefited from investors looking for yield in a low-interest-rate environment in the U.S. over the last few years. With the Federal Reserve pulling back on its asset purchases investors are fleeing the risk of emerging markets and coming back to the U.S. That may be good for our economy but it weighs on growth overseas, and also on corporate America, helping push the Dow Jones Industrial Average (DJINDICES:^DJI) down 0.74% in late trading today.

Energy stocks crumble on earnings
Chevron (NYSE:CVX) and ExxonMobil (NYSE:XOM) are the two Big Oil stocks on the Dow and they're both facing major challenges as the energy industry changes. Those challenges were front and center when Chevron announced fourth-quarter results that featured a 7.3% decline in revenue to $56.2 billion and a 32% decline in net income to $4.93 billion, or $2.57 per share.

Long term, the cost to extract oil is going up and consumers aren't willing to pay significantly more for gasoline. The lower price of oil hurt Chevron in the last quarter, but it's been either upstream or downstream margin pressure that has hurt profits for Big Oil.

You can see below that both Chevron and ExxonMobil have seen revenue fall slightly over the past three years, but margins have been crushed. 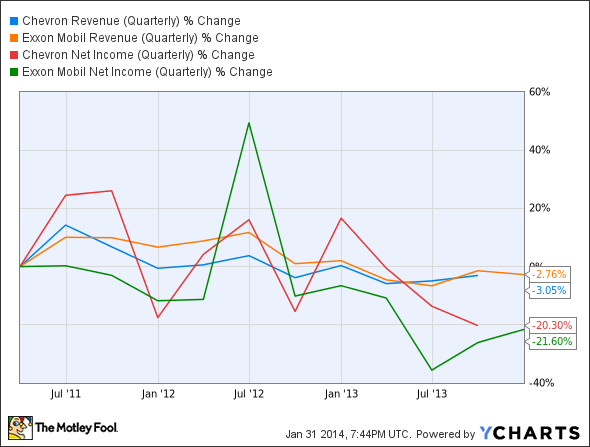 Lower margins are something of a new normal for energy companies, and that is putting pressure on the stocks. Both Chevron and ExxonMobil underperformed the market last year; unless there's a paradigm shift in energy demand I don't see them being great performers in 2014, either, especially when you look at quarterly results.