J.C. Penney recently announced today that it was "acting to protect the company's valuable NOLs" by extending the company's poison pill until 2017. The thing is, it looks like management and the board are more worried about a buyout attempt, or activist investors than the value of the losses towards future tax reduction.

Struggling retailer J.C. Penney's  (JCPN.Q) board of directors and management team have made a decidedly shareholder-unfriendly move, even worse. Last year, the company enacted a so-called "stockholder rights plan," more commonly called a "poison pill." The thing is, poison pills quite often do protect companies from a hostile takeover attempt, but that's not necessarily in the best interest of stockholders. In this case, it's most certainly not in the interest of shareholders, despite the reasons given -- protecting NOL carryforwards to reduce future income tax costs.

Yes -- there are other reasons beyond a buyout attempt where this makes sense, specifically around limiting 5% owners to below 51% of the company which can trigger a reduction in those NOL carryforward benefits, but at the end of the day, tax loss carryforwards won't come close to saving J.C. Penney. Seeing the board take a short-sighted and decided shareholder-unfriendly step like this -- one that limits potential large investor activity more than anything -- is another caution flag.

Potential earnings implications?
There's a very real chance that this is a precursor for a bad Q4 earnings report. With the existing poison pill in place through August, there was little reason to act now, beyond the expectation of more bad news. Think about it this way: With a market capitalization of $1.76 billion, all it would take to be labeled an "acquiring individual" and trigger the poison pill is a mere $86 million investment in J.C. Penney stock.

This is a company that had a market cap of almost $20 billion in 2007, and $10 billion less than two years ago. Today's market cap of $1.76 billion represents a 91% loss of value from the peak, and a 82% drop in less than two years. When factoring in the massive dilution to shareholders from last year's stock offering, investors have lost a staggering 86% in the past 24 months alone. Shareholders need to seriously question if this further limiting of outside or large investor influence is really in their best interest or not.

Covering your ass-ets?
Protecting  the company's " valuable net operating loss carryforwards ("NOLs")," was specified as the reasoning behind the amendment, according to the press release. The truth is, NOLs are the least of what management needs to be worrying about today. After all, this is what management and the board has done over the past three years:

This chart tells a lot about how things have gone: 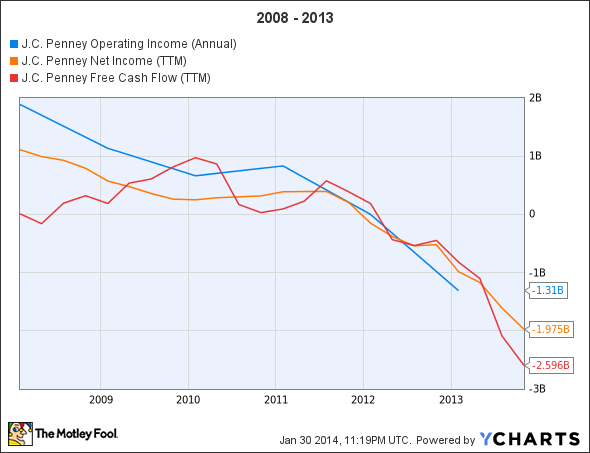 Simply put, the company remains in disarray, and is absolutely burning through its capital. As of November, the company only had $1.227 billion in cash and cash equivalents. That's less than half of the company's negative $2.6 billion free-cash-flow over the past twelve months. At that rate, the company could run out of money in six months, NOL carrybacks or not.

Traditional big box retailing done right
Competitor Macy's (M -3.24%) is a competitor in name only, as the only things the two have in common is a century of existence, a massive number of stores and a name everyone recognizes. Beyond that, things end. While Penney has struggled, Macy's has used its brand to appeal to shoppers, focusing on trends and style in an effort to attract younger and more affluent shoppers.

Penney has failed to appeal to customers as a brand destination, and its discount-driven model (that was failing under Mike Ullman when he was fired in 2012, but still reinstated upon his return) just isn't bringing in new customers. It's not even bringing in as many customers as it was two or three years ago, and that's a much bigger threat to shareholders than an acquisition attempt.

While Macy's has had to close a few locations -- a move that Penney only recently decided to take -- it has remained consistently profitable, and consistently returned value to investors. Over the past two years, Macy's market cap has increased by 36%, and shareholder total return (including dividends) has been a strong 59% gain, versus the 85% loss for Penney shareholders.

Poison Pill 2.0 not a fix
The way things are going, Penney may not live to return to profitability, and NOL carrybacks can only offset losses so much in the form of tax credits against prior income taxes paid. Over 2012 and the first nine months of 2013, the company received $551 million and $228 million in tax benefit, a drop in the bucket compared to the company's cash burn.

Yes -- there are some rules about total number of 5%+ shareholders increasing to above 51% of total ownership that would further limit the benefit of NOLs, but this is very nearly at the bottom of what management should be worrying about. After all, according to Yahoo! Finance, all insiders and 5% owners only hold about 12% of the company's shares. Shareholders are best advised to vote against this measure when you have the chance at the annual meeting in May, because really all it does is limit larger investor interest in the company.

But it's in place for now, which means there's little chance of salvation through an acquisition, or a shakeup from an activist investor buying a large stake.