Please ensure Javascript is enabled for purposes of website accessibility
Log In Help Join The Motley Fool
Free Article Join Over 1 Million Premium Members And Get More In-Depth Stock Guidance and Research
By Joseph Solitro – Feb 1, 2014 at 8:30AM

Kellogg is about to report its results for the final quarter of 2013 and the current estimates are within reach. Let's decide if we should buy going into the release or if we should wait to see what it has to say.

The Kellogg Company (K -0.44%) has lagged the overall market for the last several years, but it hopes to turn things around and get back on top, starting with 2014. Earnings growth will be the key to its rise and it is set to report fourth-quarter results in just a few days. Let's take a look at the recent performance and expectations for the upcoming quarter to determine if now is time to buy or if we should invest elsewhere.

The king of cereal
Kellogg is the company behind brands such as Kellogg's, Keebler, Special K, Pringles, Frosted Flakes, Pop Tarts, and many more. Kellogg describes itself as the world's leading cereal company, the second largest producer of cookies and crackers, a leading producer of savory snacks, and a leading North American frozen foods company. Today, Kellogg operates facilities in 18 countries and has products available in more than 180. 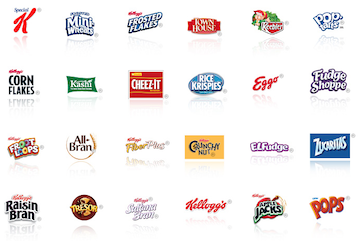 The last time out
On Nov. 4, Kellogg reported third-quarter earnings that exceeded analyst estimates on both the top and bottom line. Here's a breakdown of the results:

Earnings per share increased 6.7% and revenue declined 0.1% year-over-year as Kellogg's gross margin declined 39 basis points to 39.02%. North American sales decreased by 1.3% as sales of morning foods, snacks, and "others" saw declines and only the specialty foods segment reported growth. Internationally, sales in Europe and Latin America grew 6.4% and 3.4% respectively, while sales in the Asian Pacific declined 9.6%. Overall, it was not a great quarter for Kellogg compared to 2012. It did exceed analyst estimates, however, so it can be considered a success.

Expectations & what to watch for
Fourth-quarter results for fiscal 2013 are due out before the market opens on Feb. 6. Here are the current consensus analyst estimates:

These expectations would result in earnings per share increasing 22.4% and revenue declining 0.8% from the fourth quarter of fiscal 2012. These estimates are reasonable, but revenue expectations seem to be light; a  company with several "cash cow" brands like Kellogg can usually report a consistent stream of revenue, so I think it will be more in the range of flat to up 1%. Additionally, I think it will be important for the company to show a rise in operating profit rise and an expansion of the operating margin to make up for the declines we saw in the third quarter.

Other than the key metrics, it will be very important for the company to provide an outlook for 2014 that is within Wall Street's estimates. Currently, the expectations call for earnings per share of $3.95-$4.25 on revenue of $14.9 billion-$15.5 billion. In addition, I want to see Kellogg give a bullish outlook on the North America segment, since it makes up the majority of the company's sales. If earnings expectations can be met and guidance is within the estimates, Kellogg's stock will like see a large move to the upside since it currently sits more than 10% below its 52-week high.

Competitor's recent report
General Mills (GIS -0.11%), Kellogg's largest competitor, is the company behind some of the world's most popular brands including Betty Crocker, Pillsbury, Haagen-Dazs, Green Giant, Progresso, Yoplait, and Cheerios. It reported earnings in mid-December, which provides great insight into the industry and gives us a blueprint of what to expect from Kellogg. Here's what the company reported:

Earnings per share declined 3.5% and revenue remained unchanged year-over-year, resulting in a disappointing mixed quarter. International retail was the only segment to report year-over-year sales growth, with just a 2% increase. U.S. retail sales declined 1%, and convenience store and food-service sales fell 2%. This is not a good indicator and shows continued struggles in the United States. For this reason, we must be very cautious on our approach to Kellogg's earnings and should hold off on any new investment until after the release.

The Foolish bottom line
Kellogg's is a global powerhouse with several "cash cow" brands to keep revenue consistent. The company is about to report fourth-quarter results and I believe that the current expectations are attainable. After the difficulties General Mills faced, however, I want to wait until after the report is released to initiate a position. Keep a close eye on this dividend-paying giant and consider buying on any heavy weakness.