Please ensure Javascript is enabled for purposes of website accessibility
Log In Help Join The Motley Fool
Free Article Join Over 1 Million Premium Members And Get More In-Depth Stock Guidance and Research
By Joseph Solitro – Feb 1, 2014 at 8:30AM

Coach (TPR 2.11%), once the most loved handbag maker in the United States, has seen its market share tumble and the stock has followed suit. It recently reported dismal quarterly earnings, causing the stock to fall further. The most interesting aspect of the results came in the conference call that followed, though. Let's take a brief look at the results and break down this comment to determine what we should do from here.

The handbag maker
Coach is a global leader in premium handbags and accessories. The company sells its products through its own stores, specialty stores, and select department stores such as Macy's and Dillard's. It also operates e-commerce websites in the United States, Canada, Japan, and China.

A glance at the earnings
Second-quarter results for fiscal 2014 were released on Jan. 22 and the results missed on both lines. Here's a breakdown of the report and a year-over-year comparison:

This was a horrible quarter all around for Coach and caused the company's stock to fall over 6% in the trading session that followed. It has continued lower and now sits more than 8.5% below the level it was at before the report and over 20% below its 52-week high of $60.12. I am surprised it did not fall further after what was said in the conference call.
The call's most intriguing comment
In the conference call, Coach's President of North American retail stated that its products in the price range of $400 and up grew in penetration and represented 22% of handbag sales, with the strongest performance coming from products priced $600 and higher. CEO Victor Luis built on this statistic by making a comment that greatly confused many:

"What we're seeing... is an opportunity for us to leverage our core strength, our authenticity, quality, heritage, and the respect that consumers have for Coach as the leader in this space to continue to elevate and rebalance our assortment now to more SKUs in the above $400 space."

In summary, Mr. Luis is stating that the company will begin offering more products above the $400 mark, since it sees this as its most competitive area. However, this would be a horrible move since only 22% of its sales came from products priced over $400. Why would Coach put such a strong focus on growing this segment when 78% of its sales come from the lower price range? When asked on the call, Mr. Luis said that he and the company "have not given up the $200 price bucket, $300/$400 price bucket, and that we continue to be very active in that space," but that there is "a very substantial opportunity above the $400 price point bucket." I think the analyst caught Mr. Luis off guard and he had to think quickly. 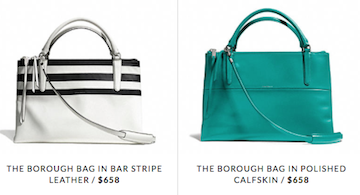 So what's the game plan?
Coach plans to place its products based on the environment each store is located in. Lower-end products will be in middle-income areas, while higher-priced items will be in the flagship store and pricier markets. I do not like this method, because it does not promote maximizing customer traffic. I believe a company should have the most product offerings in as many price ranges as possible, in order to draw in people from all income backgrounds.

What could it really mean?
Coach may be focussing on the products above $400 because it knows Michael Kors (CPRI 3.24%) and Fifth & Pacific's (KATE) Kate Spade brand are dominating the marketplace below $400. In Michael Kors' last earnings release in November, earnings per share increased 44.9% and revenue rose 38.9%, driven by comparable-store sales growing 22.9%. In Fifth & Pacific's latest release, earnings per share increased 40% and revenue rose 18.1%; this was driven by Kate Spade's incredibly strong revenue growth of 76.4% year-over-year to $180 million.

Michael Kors' and Kate Spade's results show that the demand is there, but Coach is just unable to compete like it once could. Regardless of whether it will focus on the $400 and above range or not, Coach has a tough road ahead of it and I want no part of the ride. If you own shares, you should strongly consider selling out and initiating a position in Michael Kors or Fifth & Pacific.

The Foolish bottom line
Coach has been a disappointment for quite a while now and investors cannot ignore the fact that the competition is only heating up. The latest earnings report and conference call did not help the company's situation, and actually helped push the stock lower. For this and many other reasons, I believe investors should steer clear of Coach indefinitely and go with one of its red hot competitors instead, like Michael Kors.