What the uninsured think about Obamacare is of great importance for the success of the health reform law. But they're not happy campers.

Which group of Americans was the Affordable Care Act, commonly known as Obamacare, intended to help the most?

If you answered "the uninsured," you're right. In 2009, President Obama made the case that the underlying moral basis for passing the health-reform legislation was to help the uninsured gain insurance. With this goal at the core of the rationale for implementation of the law, it stands to reason that the views that uninsured Americans have about the Affordable Care Act are quite important.

So what do the uninsured think about Obamacare? Here's what the Kaiser Family Foundation found out in its recent Kaiser Health Tracking Poll -- and what those results could mean.

Negative vibes
Kaiser surveyed 1,506 adults between Jan. 14 and Jan. 21. While most of the responses were from individuals who had insurance already, a significant number came from uninsured Americans. One of the most stunning findings from the poll related to the precipitous drop in positive opinions about Obamacare among those who don't have insurance currently. 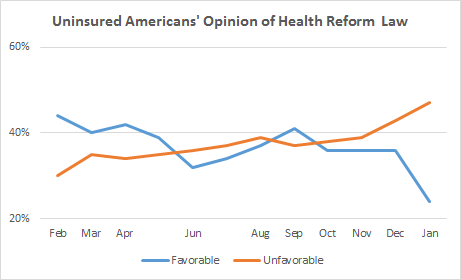 Just last month, 36% of uninsured Americans viewed Obamacare favorably -- only a little below the 43% who expressed unfavorable opinions about the health-reform legislation. Now, though, almost twice the number of uninsured respondents view the law unfavorably as view it from a positive perspective -- 47% to 24%. The trend in more negativity among the uninsured has risen relatively steadily over the past year. 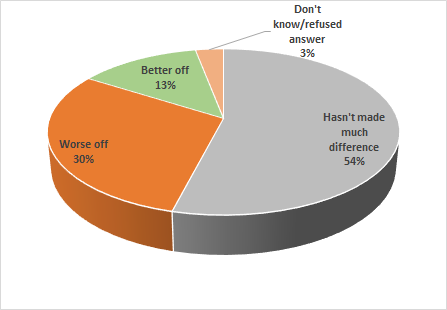 Only 13% of the uninsured think they and their families are better off with Obamacare. That compares with 30% who think they're worse off. The biggest group of respondents (54%), however, stated that the health reform law hasn't made much difference for them so far. 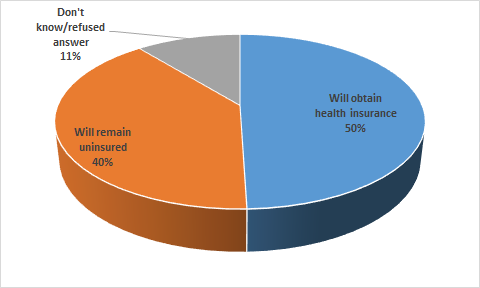 More importantly, half of the uninsured individuals say that they plan to obtain health insurance. On the other hand, a full 40% say they have no intention of gaining coverage. Of those who expressed the desire to become insured, a meager 6% plan to go through HealthCare.gov or a state-operated online exchange.

Kaiser's results were announced less than a week after the White House reported total enrollment in private health insurance so far finally hit the 3 million mark. That's much better news than previous enrollment statistics from the first three months after the disastrous launch of the online marketplaces. We should remember, though, that the latest total includes individuals who have yet to pay for their coverage. Failure to pay means that the insurance won't go into effect.

Trouble ahead?
While the Obama administration is likely relieved that more Americans are signing up for insurance, the problem remains that relatively low numbers of uninsured individuals are actually gaining coverage. According to The Wall Street Journal, McKinsey and Co. found that "only 11 percent of consumers who bought new coverage under the law were previously uninsured."

Here's where things stand currently. An increasing number of uninsured Americans view Obamacare unfavorably. Relatively few have signed up for health insurance so far. Many have no plans to enroll. And considering that nearly two-thirds of the uninsured still say they don't know how the health reform legislation will affect their families, the real possibility exists that many of those planning to obtain coverage could fail to do so.

What is the potential impact? Leaving the political dynamics aside, there could be trouble ahead for one industry in particular -- hospitals.

One key promise of health reform was that hospitals would benefit as the ranks of the uninsured fell. This hope propelled most hospital stocks to dizzying heights in 2012 and 2013. Shares of the nation's largest private hospital chain, HCA Holdings (HCA -1.82%), soared 120% during the period. Tenet Healthcare (THC -1.64%) wasn't far behind, with its stock climbing 112%. Community Health Systems (CYH -3.32%) beat both of them, though, with gains of 128%.

But if the promise of millions of previously uninsured Americans gaining coverage isn't fulfilled, these stocks could deflate quickly. Community Health's huge rise has already faded by nearly 15% over the past six months. Tenet's stock has basically treaded water during the same period. Of the three, only HCA continued a steady rise.

A negative outcome isn't necessarily a fait accompli, though. Opinions can -- and often do -- change. Uninsured individuals could see Obamacare in a more favorable light in the days ahead. Even if they don't change their opinions, they could obtain insurance anyway.

Perhaps things will turn out well, and those hospital stocks will keep marching higher. The clock is ticking, though. Open enrollment ends on March 31.

Keith Speights and The Motley Fool have no position in any of the stocks mentioned. Try any of our Foolish newsletter services free for 30 days. We Fools don't all hold the same opinions, but we all believe that considering a diverse range of insights makes us better investors. The Motley Fool has a disclosure policy.