Climate change is real, but leaning on renewable energy alone is a strategy that is sure to fail. Will that affect the investment thesis for SolarCity, SunPower, or NextEra Energy?

The growth rates of solar and wind energy may have taken to the sky, but renewables alone won't stop climate change. Source: NASA.

Renewable energy installations have soared in recent years. Wind energy has grown at an average rate of 30% since 2007 and now supplies 3.4% of the nation's electricity. The photovoltaic segment of the solar industry grew at a 35% clip in the year preceding the third quarter of 2013. More impressive is the fact that residential solar installations from companies such as REC Solar, SolarCity (SCTY.DL), and SunPower (SPWR 3.64%) have grown at a nearly 50% annual clip in recent years.

Even energy generators are getting in on the action. NextEra Energy (NEE 0.44%) generates 52%, or 9.2 gigawatts, of its power from wind and another 19% from nuclear, hydroelectric, and solar power. Numerous other power generators have increased the presence of renewables in their portfolios in the last decade. That means we can sit back and watch climate change worries vanish into the midday sun and cool summer breeze, right?

Not quite. James Hansen, the former chief climate scientist at NASA, captured headlines in early January by smacking green enthusiasts with a dose of reality at a press conference held to discuss a climate change study titled Assessing "Dangerous Climate Change": Required Reduction of Carbon Emissions to Protect Young People, Future Generations and Nature. His central argument was that relying on renewable technology to save planet Earth from the devastating effects of climate change was irresponsible and impossible, instead suggesting that the world needed vast quantities of nuclear power to have any real shot at averting disaster.

You may not agree with Hansen's comments, but the hard numbers prove him correct. Here's what the data show and how it could affect your investments.

Suggesting that renewables will let us phase rapidly off fossil fuels in the United States, China, India, or the world as a whole is almost the equivalent of believing in the Easter Bunny and Tooth Fairy.

Sorry, kids. It's a bit harsh, but it accurately conveys reality. Barring a significant and overnight technological advancement that makes renewable energy drastically cheaper, more accessible, and more efficient than existing sources of energy (including current-generation renewables), renewable technologies are not our best bet to combat climate change.

For instance, despite the impressive growth of solar installations the entire solar industry only generates 0.12% of the nation's electricity. Wind has been more successful -- and got a technological head start -- but still accounts for just 3.4%. I actually think that's quite impressive, especially considering that wind energy generation increased more than 23-fold from 2000 to 2012. But it means little in the grand scheme of things.

In 2000, renewable energy as a whole -- wind, solar, hydroelectric, geothermal, wood, and waste -- generated 9% of the nation's electricity. Despite the impressive growth in the years since, the United States will likely only generate about 13% of its electricity from renewable sources. Worse yet, traditional renewables (wind and solar) will generate slightly more than 3.5% of the total. We could -- and probably will -- produce a majority of our energy from renewable sources one day in the future, but if that future is decades from now it will be too late. We need to take climate action now.

What does it mean for your investments?
Renewables alone may not help the world avert a climate disaster, but that fact doesn't alter the investment thesis for companies such as SolarCity, SunPower, or NextEra Energy. In fact, it may bolster the reasons to own the companies. Why? Each company offers a solution to one or more of the problems plaguing the large-scale adoption of renewable energy.

Consider that the residential and commercial solar platforms of SolarCity and SunPower crush the obstacle of geography. The bulk of renewable resources are located in geographically remote regions far from urban centers that consume the most electricity. It simply isn't realistic to build large new transmission lines -- or even tap into existing lines -- to distribute renewable power throughout the grid. Enabling households and businesses to generate power locally certainly solves that issue, which partially explains the exploding growth opportunities for SolarCity and SunPower. 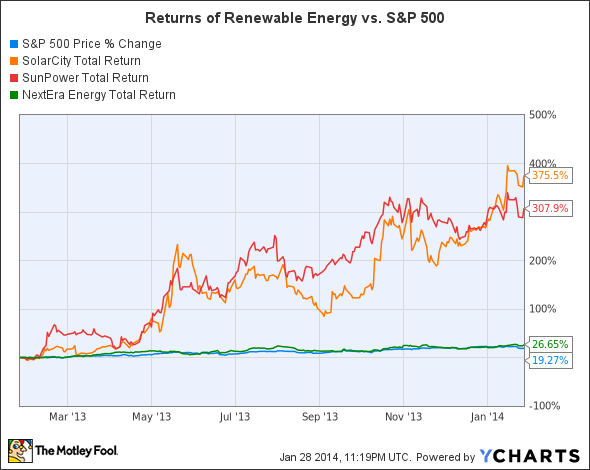 Another problem with thinking traditional renewables will quickly provide any significant portion of the nation's electricity is the obstacle of replacement. A recent article in Scientific American estimated that fossil-fuel-related infrastructure had a global value of $20 trillion. Why, then, should we expect global companies to abandon their capital-intensive assets already in the ground and with years of useful life ahead of them in favor of more capital-intensive renewable assets? The numbers simply don't work.

NextEra Energy is proving that power generation portfolios don't need to rely on fossil fuels for the majority of their capacity. When older, dirtier power plants are retired and utilities search for cleaner, cheaper sources of generation, NextEra will have the national reach and expertise to answer the call. It's also difficult to argue with the combination of market growth, dividends (3% at the moment), and a swelling bottom line offered by the company.

Foolish takeaway
The growth of renewable energy in terms of technological advancement (increased efficiency, falling costs) and contributions to the national grid is impressive and welcome. It will certainly play a critical role in reducing the world's reliance on energy imports, and will help in answering the challenges presented by climate change. However, renewable energy alone won't be the planet's savior.

It's important to note that Hansen isn't saying renewable energy represents a waste of research dollars or that it should be abandoned. Neither am I.That doesn't mean investment opportunities don't exist and, as I've outlined, it may even strengthen the investment thesis in renewable technologies.

Maxx Chatsko has no position in any stocks mentioned. Check out his personal portfolio, his CAPS page, his previous writing for The Motley Fool, or his work for the SynBioBeta Blog to keep up with developments in the synthetic biology industry.