Stability in the interest rate markets will create excellent opportunity for the popular high-yielding mREITs.

Mortgage REITs, like American Capital Agency (AGNC -1.32%) and Annaly Capital Mangement (NLY -1.32%), were crushed in 2013. The main reason was the spike in mortgage rates over the middle of 2013 created by uncertainty in the Federal Reserve's monetary policy. 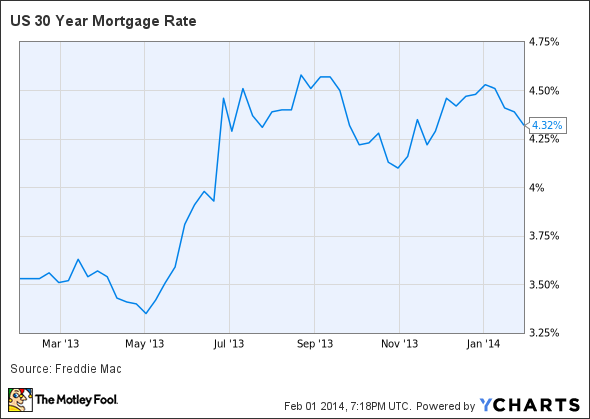 Why this year will be different
2014 will be a different story for the mREITs because the Fed has injected some clarity into where its monetary policy is heading by beginning to taper its bond-buying. While the consensus among industry experts seems to point toward rising rates over the next couple of years, the fact is, the mystery surrounding when and if the Fed is going to taper and by how much has been resolved.

So, even though mortgage industry experts seem to think 30-year mortgage rates will rise from their current levels of around 4.25% to around a 5% rate, it should be a much more controlled and steady rise than we saw last year.

What we can expect: Annaly and American Capital Agency
If there's one word to describe these two companies this year, it would be "stability." Dividends or share prices may not rebound to where they were a year ago, but the losses and dividend cuts should stop.

Annaly Capital Management is the largest mortgage REIT, and its share price tends to gravitate toward a 12% annual yield. When shares are yielding less than that on an annualized basis (like they are now), it has been a good indicator the market is anticipating the company's profits (and dividends) to increase in the future. Conversely, if the yield is much more than 12%, it has been a good indicator that dividend cuts are on the horizon.

Annaly has taken steps to create a more conservative portfolio than it had in the past, and it's in an excellent position to expand its portfolio of agency mortgage-backed securities once management feels confident that the interest rate environment is stable.

American Capital Agency is a close second to Annaly in terms of size, and it has a slightly higher yield (historically closer to 14%) because of its higher use of leverage. American Capital is trading for a substantial discount to its book value and has been capitalizing on this fact by repurchasing its shares. In fact, the company has bought back approximately 7% of its outstanding shares in the past quarter alone. This fact, combined with the stabilizing interest rates, should put American Capital in a fantastic position later this year.

Long-term scenarios
Over the next several years, as long as rates remain pretty stable, both companies will continue to deliver above-average returns for their shareholders. Unstable rates cause the need to de-leverage, which has happened over the past year or so. For example, Annaly's leverage ratio is currently at 5.4, and was as high as 6.2 before mortgage rates began to spike.

As mentioned earlier, the prudent actions of both companies featured here (and most of their peers, for that matter) will create excellent opportunities for profit going forward. Annaly's conservative portfolio allows for lots of available cash to take advantage of stabilizing interest rate markets. American Capital Agency's aggressive buybacks are essentially creating money for shareholders by buying the company back a little bit at a time at a discounted price.

Unless something extraordinary happens in the coming year, such as another market panic, it's hard to make a strong case against the mREITs at this point.

4 High-Yield Dividend Stocks to Stay Away From
366%