Shares of social gaming company Zynga (ZNGA), famous for its FarmVille series, rose an amazing 24% last week, after the company announced better than expected fourth-quarter results. It also announced plans to reduce its workforce by 15% and a promising new acquisition.

From a financial perspective, Zynga's recent performance is surprising, especially if we consider it is struggling to survive a fierce business environment, where competitors Glu Mobile (GLUU) and King -- the developer of Candy Crush -- fight for market share.

How did Zynga stop burning cash? Is Zynga on the road to recovery? 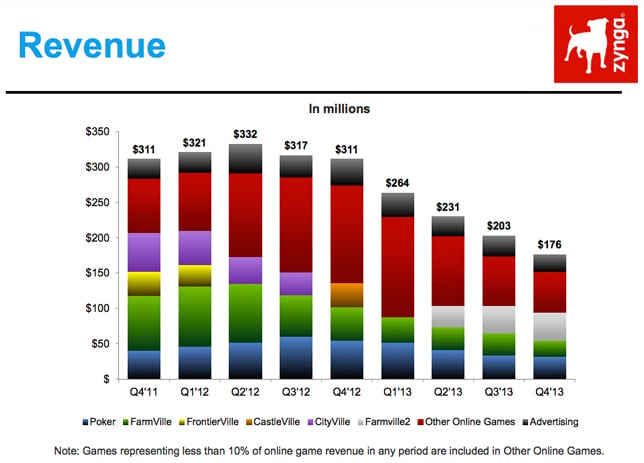 The turnaround involves short-term and long-term actions
The turnaround plan of Zynga's CEO Don Mattrick includes both short-term and long-term solutions. Short term, the company is trying to transform itself into a more efficient organization, by cutting workforce and stopping work on failed projects. For example, in June of 2013, the company let 18% of its staff go and shut down its New York, Dallas, and LA offices. It also closed OMGPOP Studio -- which developed the Draw Something series -- only one year after acquiring it for $200 million.

These actions are meant to reduce costs. Improving the balance sheet is a key issue for a company like Zynga, which has experienced a strong decline in revenue since the second quarter of 2012.

In the long run, Mattrick needs to grow sales. Although the company managed to slash its net loss to $37 million, from almost $210 million in 2012, its top-line performance is still a major red flag. Revenue for 2013 came in at $873.3 million, down 32% from the year before.

To improve its top line, the company is focusing on mobile, perhaps inspired by the recent success of mobile gaming companies Glu Mobile and King. Glu Mobile's latest hit, Deer Hunter 2014, got more than 40 million downloads on mobile platforms. The game could generate $50 million in annual revenue, which is a big deal for Glu since it saw only $21.7 million in revenue for the third quarter of 2013.

To accelerate this process, the company decided to acquire NaturalMotion, a leading mobile game developer on iOS & Android platforms, based in Oxford. The studio has been able to produce several hits, including Clumsy Ninja -- which saw more than 10 million downloads -- and CSR Racing. Like Glu Mobile, NaturalMotion is also a pioneer in providing freemium add-on services in the mobile space. The company has been in the field of creating animation technology from both gaming and film industries since 2001, when it was founded as a spin-off from Oxford University.

By acquiring NaturalMotion for a total of $527 million in cash and stock, Zynga adds roughly 260 new engineers, planners, and employees with vast experience in mobile gaming. This move should help Zynga to scale up its mobile presence. More important, Zynga's experience in social mechanics can be complemented with NaturalMotion's experience in developing great visual experience, to produce better games.

Final Foolish takeaway
Zynga's turnaround seems to have finally arrived. As a result of massive layoffs, the company lost less, which caused shares to skyrocket. However, the real catalyst is the company's mobile focus. If Zynga manages to create meaningful synergies from the acquisition of NaturalMotion, it could see top line improvement, pushing shares even higher.

If You Invested $10,000 in AMD Stock When Lisa Su Became CEO, This Is How Much You Would Have Today

Should You Buy AMD Stock Before 2022 Is Over?