Please ensure Javascript is enabled for purposes of website accessibility
Log In Help Join The Motley Fool
Free Article Join Over 1 Million Premium Members And Get More In-Depth Stock Guidance and Research
By Daniel Gibbs - Feb 3, 2014 at 10:21AM

The United States Geologic Survey says that the Uinta Basin in Utah may be one of the most resource-rich regions in the United States. Could this small E&P be a good way to profit off of the development of these resources?

One of the major stories in the financial media over the past few years has been the revitalization of energy production in the United States. This revitalization is due to a massive surge in oil and natural gas production, which has been made possible because of new technologies such as horizontal drilling and hydraulic fracturing. The most well known of these areas, and the most widely covered by the media, is the Williston Basin located in North and South Dakota, Montana, and Saskatchewan, which contains shale plays such as the Bakken. Another area that is not so widely known but which could also be important to North America's energy renaissance is the Uinta Basin in eastern Utah.

What is the Uinta Basin?
The Uinta Basin is a geologic structural basin that contains very rich deposits of oil contained in petroleum-bearing formations of low permeability, similar in some respects to the Bakken and Eagle Ford tight oil plays. The resources that this area could contain are tremendous. According to the United States Geological Survey, the Uinta Basin is estimated to contain a total of 1.32 trillion barrels of resources in place, making it one of the richest oil shale deposits in the world. 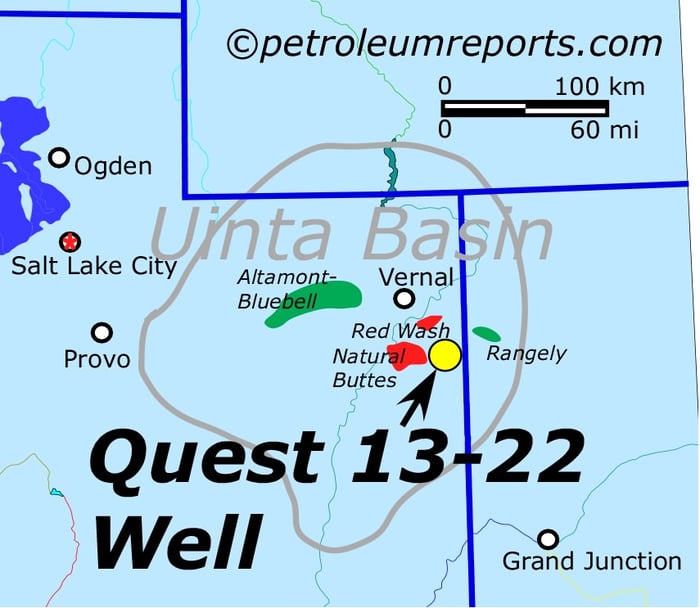 What companies are exploiting it?
The first companies that entered the Uinta Basin were relatively small exploration and production companies such as Bill Barrett Corp. (HPR), Ute Energy Upstream Holdings, LLC, Crescent Point Energy (CPG 2.92%), and others. However, today some of the majors have moved in, primarily through acquisitions. These large companies operating in the area, such as Anadarko Petroleum (APC), have such a large footprint and are active in so many areas all over the world that they are far from being a good way to play the basin. Fortunately, there are some companies out there that remain relative pure-plays on the Uinta Basin. However, they are typically smaller and riskier investments than the giant energy companies that operate in the area. Risks of Newfield Exploration
However, Newfield does come with some risks as a look at the company's balance sheet reveals. According to the company's most recent 10-Q, the company has $3.485 billion in long-term debt. This compares to $2.919 billion in shareholder's equity, giving the company a very high debt-to-equity ratio of 1.19. As the company grows its production and cash flow going forward, it should be able to reduce this high debt-to-equity ratio. However, should this projected production growth not play out as planned, or should the price of oil fall, or should some other problem materialize then this debt could become a real burden.

Hedging program could reduce risks
Like many oil companies, Newfield Exploration uses hedging to protect itself against the risk of seeing a massive cash flow and revenue decline should oil prices fall significantly. Through its hedging program, Newfield has effectively locked in the selling price for a percentage of its total production.