Zynga's key metric has grown again - but at what cost?

Zynga (ZNGA) recently reported fourth-quarter and full-year results that sent its shares popping over 20%. The big stories from the release included job cuts, a notable mobile acquisition, and slipping player numbers. The release also included an updated figure for what I consider Zynga's most important metric.

The company considers average bookings per user, or ABPU, a good measure of overall monetization of players through both in-game purchases and advertising. Bookings include the revenue for the period with the addition of any deferred revenue changes, which include in-game transactions and mobile downloads. Zynga calculates the ABPU by dividing total bookings in a period by the number of days and then dividing this by the average number of daily active users, or DAUs, for that period.

The good news from the fourth quarter was that ABPU continued to improve. However, the details behind the growth mean that it's not quite time for Zynga to pop the cork.

ABPU improvement carries caveat
Here's an updated look at ABPU and DAU growth over the past three years: 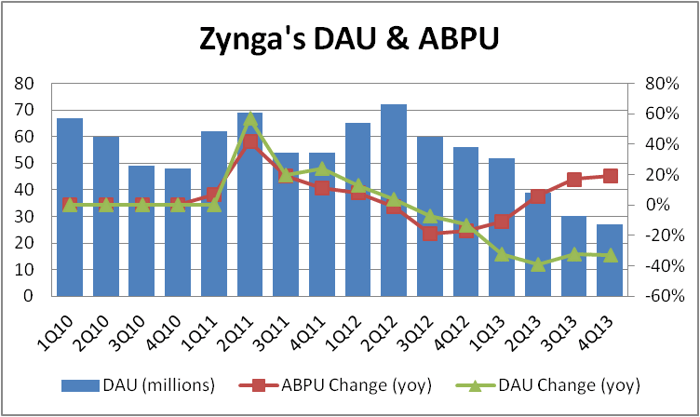 ABPU improves when bookings grow at a faster rate than DAUs. That's a good thing -- unless it occurs because DAUs have tanked.

A small percentage of players make in-game purchases and -- as a commenter on a prior Zynga article pointed out -- they are likely to stick around longer than non-paying players since they've made a real money investment. So a DAU drop and ABPU increase can happen because the non-paying players simply move on en-masse.

However, there's a limit to the loyalty of paying players, which shows in the fact that the top three games in the fourth quarter -- Farmville 2, Zynga Poker, and Farmville -- accounted for over 60% of total online game revenue. Zynga Poker has been around for almost seven years but ties with Farmville 2 at around 1 million DAUs and 10 million monthly active users, or MAUs. The original Farmville was released in 2009 and falls behind the others with about 500,000 DAUs and 5 million MAUs.

So Zynga needs games that encourage more in-game purchases but also keep both paying and non-paying players involved over a longer period of time. That's why I recently argued that Zynga Poker remains one of the company's strongest assets. A flash in the pan game can create a sudden surge in overall DAUs, but the statistic will boomerang back with a massive drop.

Mobile needs improvement
Ideally, the longer-lasting games also need to help improve Zynga's mobile metrics. The company's still dependent on the Facebook platform despite attempts to create more distance. At the time of Facebook's IPO, the social network giant divulged that its cut of Zynga's earnings amounted to 12% of its overall revenue. The two companies became tied together for a while with Zynga following Facebook down its own bumpy road.

Questions existed as to whether even Facebook could properly monetize mobile. However, Facebook's recent fourth-quarter report showed improvements in that area with 49% year-over-year growth in daily mobile users and 39% growth in monthly mobile users.