AbbVie's plans (ABBV -0.75%) may finally be coming to fruition in the next couple quarters and put current leader Gilead Sciences (GILD -1.22%) on its toes in the race of oral interferon-free combination therapies for hepatitis C.

Less has been heard about AbbVie in this space than about Gilead, with the approved likely blockbuster Sovaldi, and Johnson & Johnson (JNJ 0.05%), with its approved but smaller-market Olysio. Bristol-Myers Squibb (BMY -0.13%) also has agent daclatasvir pending approval in Europe.

AbbVie and Enanta speed ahead
However, In the Phase III trial data recently announced, AbbVie's fixed-dose combination regimen of ABT-450/ritonavir with ABT-267 and ABT-333 was evaluated both as monotherapy and in combination with ribavirin, showing a three-drug combination that yielded a 99% sustained virologic response over 12 weeks in a population of genotype 1 patients. These Phase III studies are the largest conducted on genotype 1 patients, including 2308 patients.

AbbVie partnered with Enanta Pharmaceuticals' (ENTA -1.08%) for this HCV treatment. Enanta, responsible for ABT-450 in the regimen, saw its stock increase over 10% on Friday, a bump that surpassed the 3% rise for AbbVie following the announcement of the new data. With a market cap of $650 million, Enanta certainly stands to gain a considerable amount: $40 million upon filing, $155 million for milestones, and tiered double-digit royalties. With breakthrough designation granted in May of 2013, the companies are expecting to file new drug applications before June of this year. 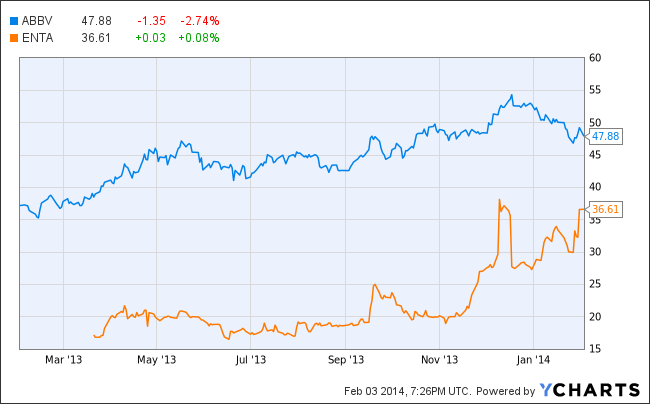 Other players in the race
Gilead is seen as the leader of this group, given its approval of Sovaldi with a targeted population and predicted sales far surpassing that of Johnson and Johnson's Olysio, the only other agent approved thus far. Gilead's prospects look very good for approval for a combination therapy as well – it plans to submit a new drug application for the combination of Sovaldi with ledipasvir this quarter, a combination that has already achieved the breakthrough designation that will fast-track its approval. It is no wonder that Gilead spurned advances by Bristol-Myers Squibb to establish a partnership for a combination.

Gilead's fixed-dose combination is expected to top $7 billion in sales. In comparison, AbbVie's regimen is estimated at $3 billion. However, AbbVie and Gilead's regimens are equally effective with sustained viral responses both well over 90%. Subsequently, prescribing and market share will depend on compliance and price.

For compliance and ease of patient use, Gilead's combination holds the distinct advantage of being a single oral pill, while AbbVie's requires multiple pills a day, translating to a more complicated patient regimen and subsequently less compliance and physician preference for prescribing.

However, money matters and, by price, Gilead is already getting a lot of heated comments about the $1000-per-pill Sovaldi. It is likely any combination coming from Gilead will be similarly priced. Various insurers, foreign government health agencies, and pharmacies are pushing back against the price. Coverage is questionable for the drug now, although it is standard that negotiations will continue for several months following approval of a drug. Based on statements by Gilead executives, however, it seems that Gilead is unlikely to acquiesce to protesters on the price. As a result, if AbbVie enters the market, a price war could be impending, depending on how open AbbVie is to discounting its therapy to increase its volumes.

Bottom line for AbbVie
While AbbVie's announcement reflects well on the company's prospects for 2014, its quarter earnings report released the same day showed a decline in both net income and sales as compared to a year prior. The 2014 forecast of full-year earnings was also slightly behind analyst predictions at $3-$3.10 forecast as compared to $3.13/share predicted. These numbers may have contributed to the very minimal bump in price that AbbVie experienced following the announcement of its quite impressive clinical data.

The overall picture is much more optimistic, however. AbbVie did not include anticipated hepatitis C revenues in these predictions, and all recent events indicate that approval will come this year. As such, AbbVie is likely to not only have a blockbuster therapeutic in one of the hottest drug races but also surpass financial expectations later this year.